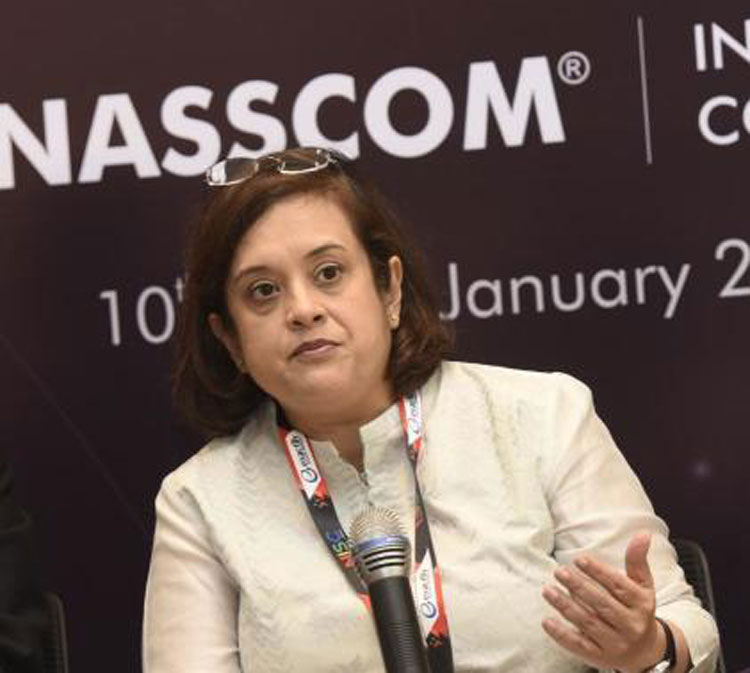 Nasscom president Debjani Ghosh said the landscape of the entire industry was transforming at a faster pace with the help of digital means
Telegraph picture
Our Special Correspondent   |   Mumbai   |   Published 20.02.19, 07:41 PM

IT industry association Nasscom on Wednesday broke with tradition and stopped the practice of forecasting annual growth.

Instead, it revealed the details of a survey of chief executives that showed they were “cautiously optimistic’’ about the growth prospects for 2019-20 given the increasing global macroeconomic headwinds.

The decision comes on the back of the industry achieving an export growth of 9.2 per cent in 2018-19, which is above the estimate of 7-9 per cent that Nasscom had come out with in May last year.

Nascom chairman Rishad Premji on Wednesday said the decision to not offer a growth estimate number was taken “philosophically” by the association but hastened to add that it must not be connected with the difficulties it saw for the current fiscal.

He pointed out there can be “deductions” based on the findings of the CEO survey and people can accordingly get an idea of the industry’s performance.

Nasscom president Debjani Ghosh said the landscape of the entire industry was transforming at a faster pace with the help of digital means, making it “impossible to predict the future”.

Some of the IT firms, particularly larger players that do not offer revenue growth guidance, were unhappy with the Nasscom practice as their performance used to be benchmarked against the official industry forecast.

Nasscom has been offering an estimate of the industry’s revenue growth for the next financial year every February.

However, last year, it deferred it to May because of difficult market conditions.

When asked if the body would come out with a number mid-way through the year like last fiscal, Ghosh denied such a possibility, saying there was a need to look at the industry with a “new lens” and gave a broad picture of what to expect.

The association revealed details of the survey of chief executives, which showed the mood to be cautiously optimistic.

However, they were gung-ho about the prospects of digital services.

The survey showed the digitisation of businesses and enhanced customer experience emerged as the top two spending areas in IT and BPM for 2019.

According to the survey, advanced analytics and artificial intelligence are the top priority areas for over 50 per cent of global CEOs in terms of technology spending, followed by hybrid cloud and cyber-security.

This apart, almost 90 per cent of the CEO responses showed that skills were key and that the current calendar year would be similar or somewhat better than 2018 for hiring.

However, the survey also found out that 44 per cent of those polled were less confident of the global economic and business sentiment, which is lower than 2018.

“The CEO sentiment for 2019-20 is cautiously optimistic in the backdrop of concerns of global macroeconomic risks. Digitalisation initiatives are at the core of business transformation and may be less impacted by somewhat lower growth in major economies,’’ Ghosh said.

According to the industry association, about 1.7 lakh jobs were created in the year by the industry, while 6 lakh employees were re-skilled for the future. 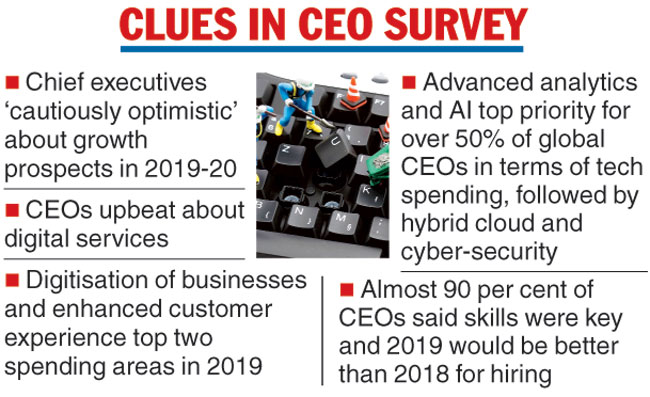