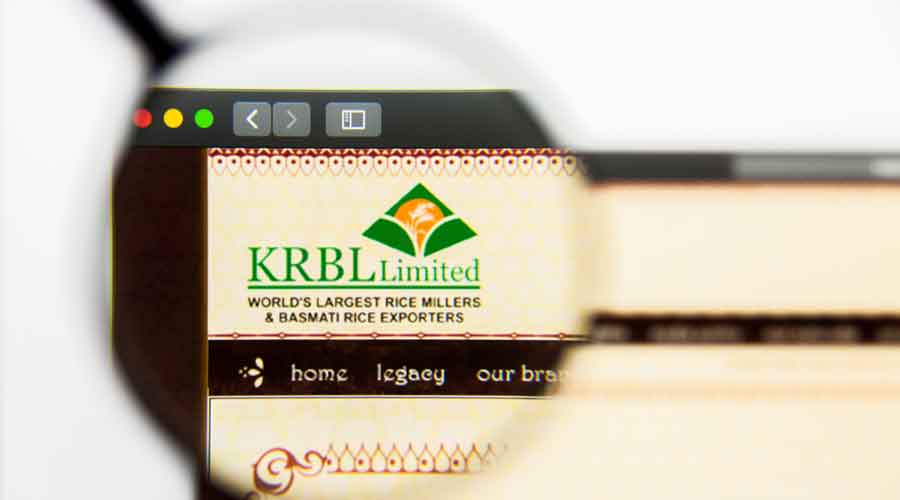 During the early morning call, participants from mutual fund houses and brokerages blamed the management, represented by chairman Anil Kumar Mittal and joint MD Anoop K. Gupta, for not doing enough to mitigate the damage in investors’ perception, leading to the KRBL stock being clobbered on the bourses
Shutterstock
Our Special Correspondent   |   Calcutta   |   Published 14.12.20, 01:59 AM

The promoters of India’s largest basmati exporter KRBL Ltd may consider rewarding its shareholders by way of buyback or issuance of bonus shares as they seek to mitigate the damage emerging out of a regulatory action.

In an investor meet on December 10, a day after the Enforcement Directorate (ED) filed prosecution complaint against Anoop Kumar Gupta, joint managing director of KRBL and one of the promoters, in an UPA-era defence deal, the company assured the shareholders to call a board meeting to discuss the proposals.

During the early morning call, participants from mutual fund houses and brokerages blamed the management, represented by chairman Anil Kumar Mittal and joint MD Anoop K. Gupta, for not doing enough to mitigate the damage in investors’ perception, leading to the KRBL stock being clobbered on the bourses.

“We will immediately call a board meeting and would like to pay cash to the shareholders, and the line could be buyback, dividend or other things,” the promoters told the irate shareholders. KRBL is the owner of popular basmati brand India Gate.

The company also staunchly defended itself against any wrongdoing or any connection with the Embraer aircraft purchase case. The ED alleged that Brazilian company Embraer SA paid a kickback of $5.76 million to secure a $208-million aircraft purchase deal from the Indian government. It is alleged that an overseas subsidiary of KRBL based in the UAE was a conduit to route the bribe back to India.

“At the outset we would like to state that the allegations levelled by the Enforcement Directorate are false, frivolous and baseless. KRBL Ltd has not entered into any sham agreement with any entity. We have been cooperating with the entire investigation for the last three years and have given all documents asked by the ED, none of which in any way cement the allegations,” KRBL stated in a statement that was reiterated by Mittal and Gupta during a morning conference call.

In the past, KRBL’s name was dragged into the AugustaWestland chopper scam as its main distributor in Saudi Arabia, Balsharaf, got embroiled into it.

The company said Gautam Khetan, who used to be an independent director on KRBL board, introduced Interdev Aviation to the company. Interdev was also chargesheeted on December 9 along with Gupta and a few others. During the call, Gupta and Mittal said the ED was making KRBL a scapegoat by association and no transaction of Embraer was routed through KRBL.

After hitting a high of Rs 662 in November of 2017, the KRBL stock fell to Rs 91 in March amidst a broad market selloff triggered by the lockdown and the pandemic, KRBL shares have somewhat recovered to a high of Rs 339 in August. But it came off sharply again to close at Rs 251 on Friday as the stock wilted under the heat of the ED investigation.

The company is sitting on an inventory of Rs 4,000 crore — rice procured for preparing basmati — and about Rs 500 crore worth of cash on the balance sheet.

Shareholders pressed the management to liquidate inventory partly and reward shareholders by way of special dividend or buyback to prop up the stock price.

However, the company defended its strategy to hold high inventory to expand business. It plans to touch a turnover of Rs 7,000-8,000 crore and building inventory would be key to achieving the topline. KRBL had total revenue of Rs 4,522 crore, up 9 per cent in 2019-20 and profit after tax of Rs 558 crore in the same fiscal, up 11 per cent. It claims to hold 25 per cent market share of branded basmati export and a 30 per cent share in the domestic market.

The management said it would not hold any cash on the books by the end of the fiscal as it would be used to procure more rice. If stocks are liquidated and used for some other purpose, KRBL would have to depend on costly bank finance for procurement.

To a suggestion that KRBL should demerge the renewable power business (solar and wind), the management said such a proposal has been found unviable. The power purchase agreements could not be transferred to a demerged entity, and if new PPAs are signed, the units will earn half of what they had been earning due to a fall in power purchase rates.