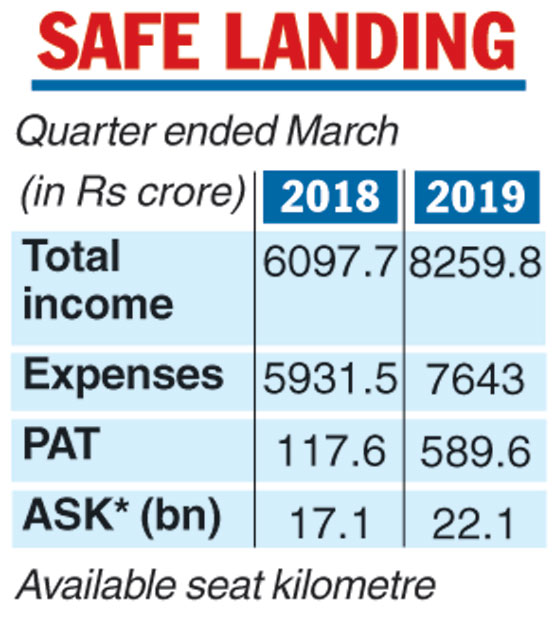 InterGlobe Aviation, the parent of budget carrier IndiGo, saw its net profits rise five-fold in the fourth quarter ended March 31, 2019, as the airline benefited from the higher fares triggered by Jet Airways limiting its operations.

The company reported a profit after tax of Rs 589.6 crore in the January-March quarter of 2018-19 compared with Rs 117.6 crore in the corresponding period a year ago. InterGlobe saw its revenue from operations rising almost 36 per cent to Rs 7,883.3 crore during the quarter against Rs 5,799 crore in the year-ago period.

Analysts had expected the airline to report strong numbers as rival Jet Airways had to ground flights during the period, leading to a spike in fares. The quarter saw its fuel cost rising 19 per cent to Rs 2,781.3 crore from Rs 2,338 crore in the year-ago period. Its cost per available seat kilometers rose almost 6.7 per cent.

“Fiscal 2019 was a tough year for the airline industry in India because of high fuel prices, weak rupee and intense competitive environment. However, it is a tale of two halves for IndiGo, with the first half of the year incurring losses and the second half of the year experiencing a sharp recovery,’’ Ronojoy Dutta, CEO of InterGlobe, said.

According to an Icra note, the increase in airfares because of the demand-supply imbalance created by the grounding of Jet impacted the passenger load factors of airlines.

During the fourth quarter, the load factor at IndiGo was 86 per cent, a drop of three per cent over the year-ago period.