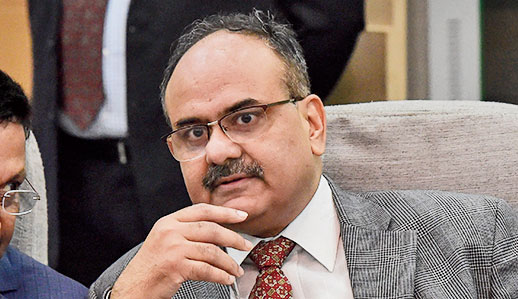 Amid concerns that the government may fall short of its tax collection target in a slowing economy, the Centre has set an ambitious Rs 1.1 lakh crore monthly GST target for the remaining four months of the current fiscal and asked taxmen to step up efforts to achieve the goal.

Revenue secretary Ajay Bhushan Pandey held a video conference meeting with top tax officials of departments looking after both income tax and indirect taxes such as GST and asked them to step up efforts to achieve tax targets, finance ministry sources said.

While taxmen have been asked to plug evasions, Pandey impressed upon them to achieve targets without harassing honest taxpayers.

Taxmen were told in no uncertain terms that both the GST as well as the Rs 13.35 lakh crore target for direct taxes for 2019-20 will have to be achieved.

In the meeting, the GST target was set at Rs 1.10 lakh crore every month between December 2019 and March 2020. Of these four months, Rs 1.25 lakh collections have to be achieved in at least one month, the sources said.

Gross GST collections, which include the share of both the Centre and the states, crossed the Rs 1-lakh-crore mark in four out of the eight months of the current fiscal and only once was above Rs 1.1 lakh crore. At the current trend, the GST tax collection target is likely to be missed by at least Rs 1 lakh crore.

Out of the Rs 13.35 lakh crore direct tax collection target, about Rs 6 lakh crore, or 45 per cent of the annual target, has been collected till October (first seven months).

For 2019-20, the Union government is targeting Rs 6.63 lakh crore from its share of GST revenues. GST subsumed 17 Centre and state levies and the two equally split the revenues.