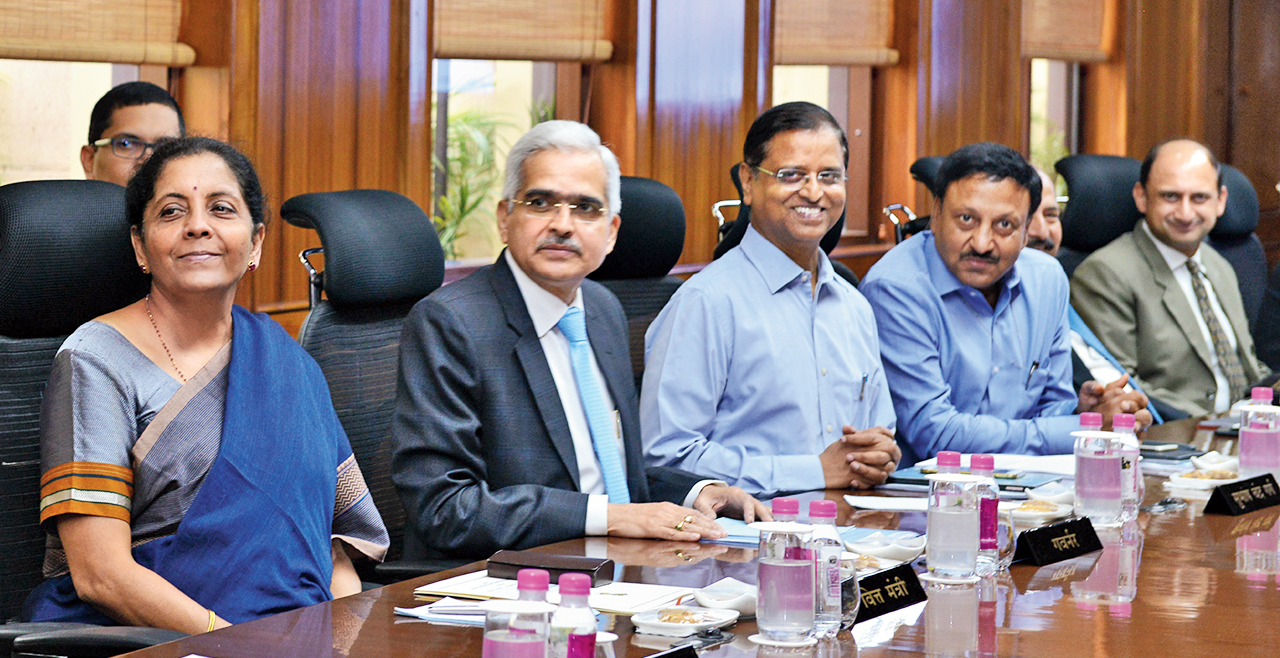 Finance minister Nirmala Sitharaman during the post-budget meeting of the RBI’s central board in New Delhi on Monday.
Picture by Prem Singh
Our Special Correspondent   |   New Delhi   |   Published 08.07.19, 08:15 PM

Reserve Bank governor Shaktikanta Das on Monday said the apex bank would initiate discussions with the government on the issue of overseas sovereign bonds, an instrument that will help to reduce the government’s dependence on the domestic market to bridge its fiscal deficit.

The RBI issues bonds on behalf of the government as part of its resource mobilisation exercise to fund the gap between revenue and expenditure.

In her budget speech on Friday, finance minister Nirmala Sitharaman said the country’s external debt was currently low and the government would start to borrow a part of its funding requirement from the overseas market in foreign currency, Sitharaman held a customary post-budget meeting with the RBI board here on Monday.

She added that the country’s sovereign external debt-to-GDP ratio level is among the lowest globally at less than 5 per cent.

It is not often that the government taps the foreign markets to raise funds. The finance minister did not specify the proportion of the borrowings in foreign currency, such as sovereign bonds. Some reports indicate the government could borrow as much as $10 billion through this instrument.

Das said overall the system liquidity was hugely in surplus. If individual banks have liquidity problems, the RBI will provide the support.

Expressing his satisfaction over the government’s move to slash the fiscal deficit target, Das said it would help to improve investments by the private sector as crowding out impact will be less.

With regard to the shadow banking sector, the governor said the RBI was monitoring NBFCs based on their size and past repayment behaviour. “We are monitoring their operations very closely and at regular intervals.”

On the additional responsibility given to the central bank to regulate housing finance companies (HFCs), he said it has been given after a lot of deliberation within the government and also with the RBI.

On the impact of the fuel price hike on inflation, the RBI governor said it would take time for the transmission to happen.

The Monetary Policy Committee of the RBI will meet in the first week of August and take stock of the situation.

“There could be a marginal increase, but it’s not that, next day itself, it will impact inflation. It takes time for transmission,” Das said.

After the rise in fuel taxes in the budget, the prices of petrol and diesel rose at least Rs 2.4 and Rs 2.36 a litre, respectively, across the metro cities.

On the government’s move to infuse Rs 70,000 crore in public sector banks, Das said it was a very positive development because it not only enabled banks to maintain the capital they need but also to comply with the regulatory requirements.

It will also give enough capital to the banks to step up their lending and credit disbursement and augur well for the banking system.