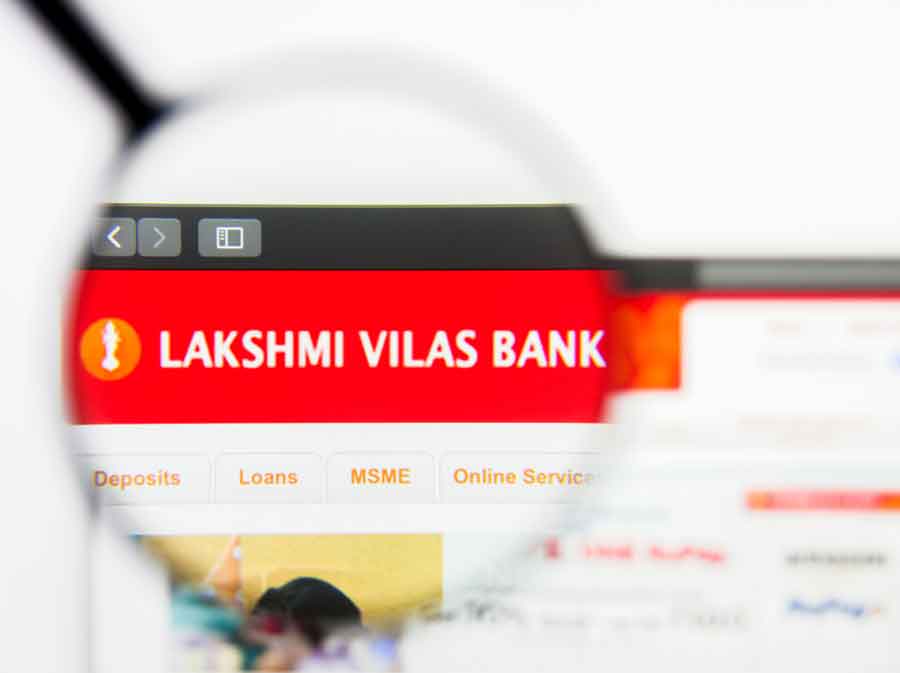 Data reveals that individual shareholders — who together held 46.73 per cent of the LVB stock as of September 30 — had been buying shares and increased their collective stake by more than 4.5 per cent since the end of June.
Shutterstock
Our Bureau   |   Mumbai   |   Published 27.11.20, 05:10 AM

The Bombay High Court has refused to stay the hastily-crafted amalgamation scheme under which Lakshmi Vilas Bank (LVB) is being folded into DBS Bank of India that comes into effect on Friday.
Certain promoter group entities of LVB rushed to the court to seek legal redress against the RBI, the Centre and DBS Bank as the scheme effectively turns their shares in the bank into dud stock with no value.

A division bench comprising Justices Nitin Jamdar and Milind Jadhav set December 14 as the next date for hearing on the petition.

“We are refusing the interim relief sought by the petitioners to stay the amalgamation. The petitions shall be placed for hearing on December 14 when the respondents shall file their affidavits in reply,” the division bench said.

The petition was filed by Kare Electronics & Development, Pranava Electronics and K.R. Pradeep.
A separate petition was filed by Indiabulls Housing Finance, which holds a 4.99 per cent in LVB, and had evinced interest in taking over the troubled bank last year. An elaborate smear campaign against the promoters of Indiabulls eventually scuttled the bid.

The spokesperson of the mortgage lender could not be reached for comment on the latest developments.
The petitioners said they were not against the rescue plan for LVB but were upset over the fact that the RBI had completed the process without considering the shareholders’ interest. Senior advocate Darius Khambata appeared for the promoters while D. D. Madon represented Indiabulls.

Under the terms of the amalgamation scheme, the entire amount of the paid-up share capital and reserves and surplus, including the balances in the shares or securities premium account of the transferor bank, has been written off. The LVB stock will stand delisted from Friday.

The promoter group, which includes K.R. Pradeep and others, holds close to 6.80 per cent of LVB as of September 30. Based on the closing price of the LVB scrip in Thursday’s trading, their holding is worth around Rs 17.50 crore.

However, large financial institutional investors like LIC, which holds 1.62 per cent, Aditya Birla Sun Life (1.83 per cent), Srei Infrastructure Finance (3.34 per cent), M.N. Dastur (1.89 per cent) have chosen to remain silent after the announcement.

This is not the first time that the shareholders of a bank have received short shrift when it has been merged with another lender. Back in 2013 when Global Trust Bank was amalgamated with Oriental Bank of Commerce, there was no share swap for GTB shareholders even though both banks were listed.

Data reveals that individual shareholders — who together held 46.73 per cent of the LVB stock as of September 30 — had been buying shares and increased their collective stake by more than 4.5 per cent since the end of June. The stock has dived from Rs 70 per share in January 2019 to Rs 25 in late June before being frozen for trading on Thursday at a nominal value of Rs 7.65 on the BSE.

Some observers believe that the RBI should not have carried out a frenetic process to devise a rescue plan and ought to have invited bids from other banks for better valuation.

There were bidders like Clix Capital which had submitted a non-binding bid in October proposing to invest Rs 1700 crore in LVB's equity but were spurned by the regulator.

J.N. Gupta, MD of proxy advisory firm Stakeholders Empowerment Services, told The Telegraph that for a regulator, the important stakeholders are the banking system and the depositors. He, however, added that though RBI has powers under Section 45 of the Banking Regulation Act, it has to be used rationally and judiciously.

“While one could argue that the regulator should have stepped in earlier to prevent LVB’s deterioration to this level, it was left with little choice than to allow another bank to take over and protect the depositors. Retail shareholders will feel the loss of equity value, but equity investments do come with risks,” said Hetal Dalal, chief operating officer of Institutional Investor Advisory Services.

“Transparency is the best medicine for efficiency. It's what sets you apart from everybody else,” he added.