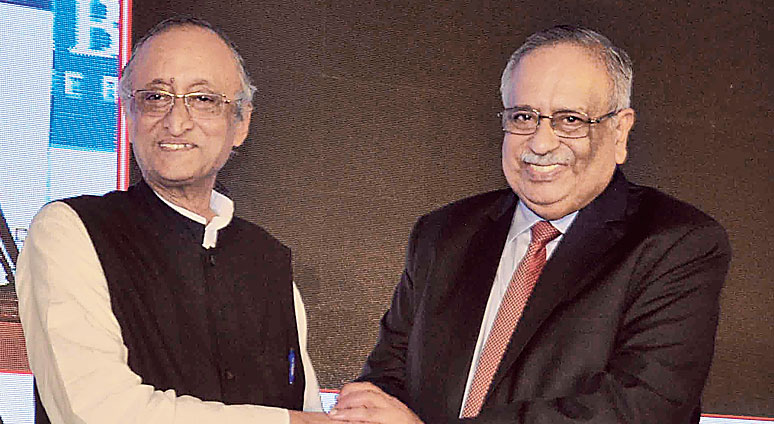 Bengal finance minister Amit Mitra has urged N.K. Singh, chairman of the Fifteenth Finance Commission, to extend the tenure of the GST compensation to states by three years.

After the implementation of the Goods and Services Tax in 2017, it was decided that the Centre would compensate the states for the revenue shortfall on account of the shift to the new indirect tax regime for a transition period of five years, which ends in 2022.

Several states, including Bengal, have expressed their concern before the GST Council over declining collections limiting their ability to implement the centrally sponsored schemes, necessitating greater compensation.

“States today have the burden of 60 per cent of the development expenditure on their shoulders. What is the receipt of the state? GST collection is not increasing. So, I said to honourable N. K. Singh at GST meetings to see the divergence between what we spend and what we receive. It is my fear that in 2022, we will fall off the cliff,” Mitra said at the 165th annual general meeting of the Bengal Chamber of Commerce and Industry.

“Why 2022? Today we are getting compensated by the Centre and in 2022 that stops. I made a request to please recommend in the Finance Commission to extend the period of compensation by another three years,” Mitra said.

The Centre, however, is not bound to accept all the recommendations of the Finance Commission.

The Fifteenth Finance Commission was set up in 2017 to give recommendations for the devolution of taxes and address various fiscal issues for five years, starting April 1, 2020.

Mitra said the current slowdown in the economy was on the back of certain structural issues such as demonetisation, early adoption of GST and liquidity crisis following the IL&FS default.

“A government-made structural destabilisation of the economy has resulted in today’s miserable situation. Ultimately, the rub is on the poor,” Mitra said.

The minister added that the reduction in the corporate tax rate might not necessarily result in companies rushing to take advantage before assessing their gains and losses from giving up incentives.

“I was reading today that the top 500 companies in India held over Rs 8 lakh crore in their books and, therefore, lack of funds was not real. Why are they sitting on it? They are not investing because there is no demand,” he said.