Why Karl Marx would have frowned at Communist parties 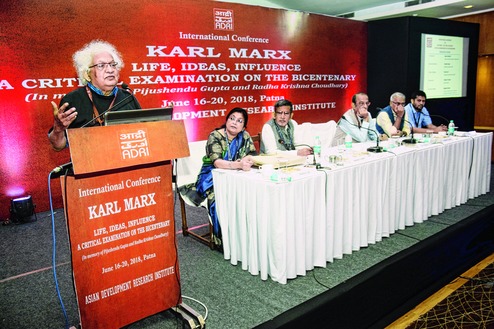 Patna: Karl Marx, whose name all Communist parties across the globe swear by, did not favour Communists forming political parties.

Former JNU professor Dipankar Gupta said this while delivering the Paul M. Sweezy Memorial Lecture on the inaugural day of the five-day international conference on "Karl Marx - Life, Ideas, Influence a Critical Examination on the Bicentenary" under the aegis of the Asian Development Research Institute (Adri) here on Saturday.

At the Adri event, noted academicians and scholars from across the globe will try to find relevance of Marx's philosophy, propagated two centuries ago.

"Most of his formulations were around the two industrial revolutions," Adri member-secretary Shaibal Gupta said in his welcome address. "He had predicted the doom of capitalism, yet capitalism survived. In this background, one wonders how Marx will be relevant in the digital age and in the fourth industrial revolution, which will be based on artificial intelligence."

To a question from the audience, Gupta said neither Marx nor Friedrich Engels ever propounded the concept of violence for social change. Marx, in fact, particularly propounded the vanguard role of women in social revolution. Gupta lamented the misinterpretation of Marx's ideas over time, attributing this tendency of scholars to their spontaneous association of Marxism with Communist dictatorships like those of Stalin, Mao, Ceausescu and others.

Gupta said that critiques by Hanna Ardent, Max Weber and Milton Friedman were scathing in their criticism of Marxism but much of it was based on weak grounds.

The conference is being held in the memory of Pijushendu Gupta and Radha Krishna Choudhary, who were the chief organisers of the national seminar on the sesquicentennial of Marx convened in Begusarai in 1967.

Delivering the keynote address, Lord Meghnad Desai said Marx's theories hold lessons for the contemporary world, mainly the role of capitalism in the context of globalisation. He said Marxism has gained a new lease of life since the financial crisis of 2008.

Analysts have pointed out that greater economic freedom and the rise of a dominant middle class would ultimately lead to situation where greater political freedom would be demanded, culminating in the flowering of democracy in China. Lord Desai pointed out that such an outcome had already been visualised by Marx in his writings.

Since the 2008 global financial crisis, Nayyar said, globalisation has seen a major backlash in European countries and also America which has seen the rise of Donald Trump.

Professor Seongjin Jeong from Gyeongsang National University, Republic of Korea, presented the Marxian view over the capitalist development in South Korea from 1970 to 2014.