Chief minister Nitish Kumar on Tuesday visited Punaura Dham in Sitamarhi district, believed to be the birthplace of Goddess Sita, and used the opportunity to seek people's support against child marriage, dowry, and the illicit liquor trade. 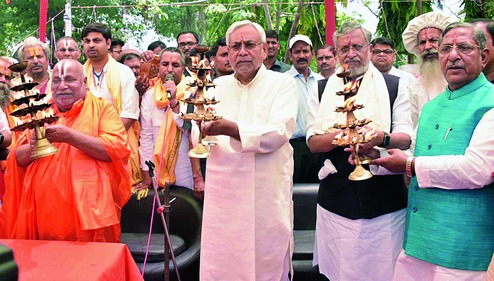 Patna: Chief minister Nitish Kumar on Tuesday visited Punaura Dham in Sitamarhi district, believed to be the birthplace of Goddess Sita, and used the opportunity to seek people's support against child marriage, dowry, and the illicit liquor trade.

Punaura Dham, around 140km north of Patna, is believed to be where Sita was found by king Janak while he was ploughing a field as part of rituals to alleviate drought. It is believed that she was later brought up at his palace in Janakpur, in modern-day Nepal.

Nitish on Tuesday launched schemes worth Rs 48.53 crore aimed at development and beautification of Punaura Dham and to provide tourism related facilities for the people who visit the place from India and Nepal.

"We have rid the society of child marriage and dowry system. This is the occasion of the birthday celebrations of Goddess Sita and the wedding season is also on, so a message against dowry and child marriage should go out from here. We all need to take a pledge to remove these to make Bihar an ideal state," Nitish said.

Swami Rambhadracharya, a Padma Vibhushan-winning religiouls leader, who was present at the event, supported the ban on liquor and said that the step was bound to extend a good message to the society.

The chief minister exhorted the people that dowry system will vanish from the society quickly if they make up their mind not to indulge in it.

He also repeated his call to not attend any wedding in which dowry has been exchanged.

Nitish claimed that prohibition, which was implemented in the state two years ago, has led to peace and harmony in cities, towns and villages.

"Still, some people are indulging in liquor trade and consumption in a clandestine manner. We need to be alert about it," he added.