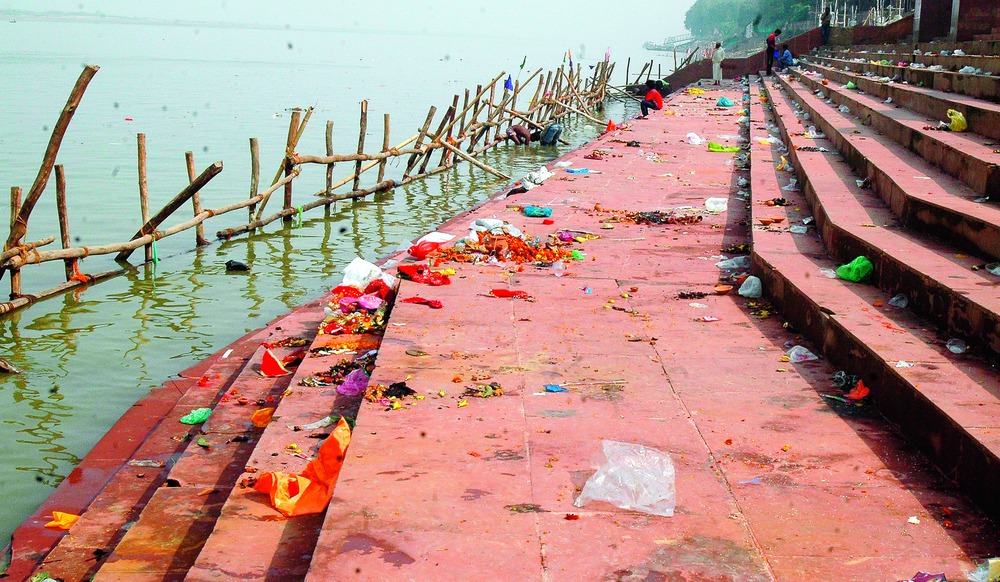 Garbage replaced the spic and span Patna riverfront on the fourth and final day of Chhath.

Devotees dumped puja material at the ghats where they worshipped the Sun God. Remains of offerings were strewn at all ghats from Digha in the west to Kali Ghat in the east. Even roads leading to ghats were not spared.

Incense stick packets, havan materials, vermilion packets, matchboxes, clothes and plastics (in which devotees had brought the puja material) were littered on roads leading to the ghats.

Hundreds of plastic cups in which devotees and their families had tea after the completion of the doosri arghya were thrown there. A senior official with the New Capital Circle of Patna Municipal Corporation said around 100 sanitation workers were deployed on Monday to clean the ghats. But the ground reality defied their claims.

When a team from The Telegraph visited the ghats soon after the festival ended, three to four PMC sanitation workers were found at Mahendru and Collectorate ghats, while one was at Kali Ghat.

The chief sanitation officer of the PMC, Vikram Prasad, who was found supervising the cleaning work at Mahendru Ghat said the workers had a tough time in picking up the cups from Ganga. Quite a few plastic cups fell into the holy river because of strong winds.

"This year, we started cleaning the ghats from doosri arghya. Earlier, we used to start it after the doosri arghya," said Prasad, adding that he and the officials of all other circles of the PMC had received instructions regarding the early start of cleanliness drive from PMC commissioner Abhishek Singh.

Prasad said sanitation workers removed a truck full of puja materials after the pehli arghya on Sunday from the ghats. "Monday was worse with more filth around," he said. Prasad, however, chose not to comment on the devotees who left puja materials at the ghats. When a few residents were asked on who should be blamed for the dirty ghats, some held the devotees responsible for the filth, and some had bizarre answers.

Narendra Kumar, 43, a resident of Kidwaipuri, who came to fetch Gangajal from Kali Ghat, said devotees and their families tend to forget about the cleanliness and hygiene soon after the festival is over.

"During the four-day festival, devotees and their families take care of sanitation for every ritual but they forget about it after offering the doosri arghya. How can the devotees leave behind the puja materials at the ghats? They should dump them at proper places. They leave behind the puja material in the river from where they pray to the Sun god. That's the irony," he said.

Mukund Verma, a resident of Masaurhi, who came to observe Chhath at Collectorate Ghat, defended his action of leaving the prayer site filthy.

"Chhath organisers are supposed to look after the cleanliness work after the doosri arghya. Devotees already take a lot of pain while observing Chhath. They also have to walk a long distance to reach the ghats. If they forget the puja materials at the ghats, puja organisers and PMC workers should clean the place. Everyone earns good fortune by participating in Chhath," said Mukund.

PMC commissioner Abhishek Singh said the PMC has taken several measures to ensure little waste is left at the ghats after Chhath.

"We have engaged teams to pick up the non-biodegradable materials (such as plastic) after pehli and doosri arghyas."

The teams carried out cleanliness drives first around 9.30pm soon after pehli arghya on Sunday. "They worked the whole night to ensure cleanliness at the ghats," said Singh, adding that the PMC will get the ghats cleaned on Tuesday as well as part of its routine schedule.

Environmentalist Ashok Ghosh said the administration needs to align ghat cleanliness with religion to address the issue of littering the ghats.

"Chhath devotees are cautious about cleanliness during the entire festival. The administration should make announcements that nobody should leave behind puja waste materials at the ghats. If such initiatives are taken, the issue can be addressed. Otherwise Chhath is not a festival like Durga Puja in which idols are immersed which heavily pollute the river," said Ghosh.

After the festival ended on Monday, Patna wore a deserted look. Most of the city joints, which otherwise remain crowded, hardly had people.

Tired with the four-day festive rituals, most people chose to stay indoors. Roads were almost desolate and for traffic cops it was an easy day in terms of workload. Traffic constables normally found on traffic posts were not visible. There were less policemen too. Most were on duty for the past four days at different ghats and other places where Chhath was being performed.

Manoj Kumar, a ticket collector at Eco Park, said till 3pm, there were around 50 people in the park compared to at least 500 on other days by this time.

"Even the morning walkers were less compared to normal days. However, the number will increase by evening. Being a government holiday, people must have chosen to stay indoors till afternoon," said Manoj.