The former Chief Minister was joined in her protest by the Congress and her son Tejashwi Prasad, a member of the legislative assembly 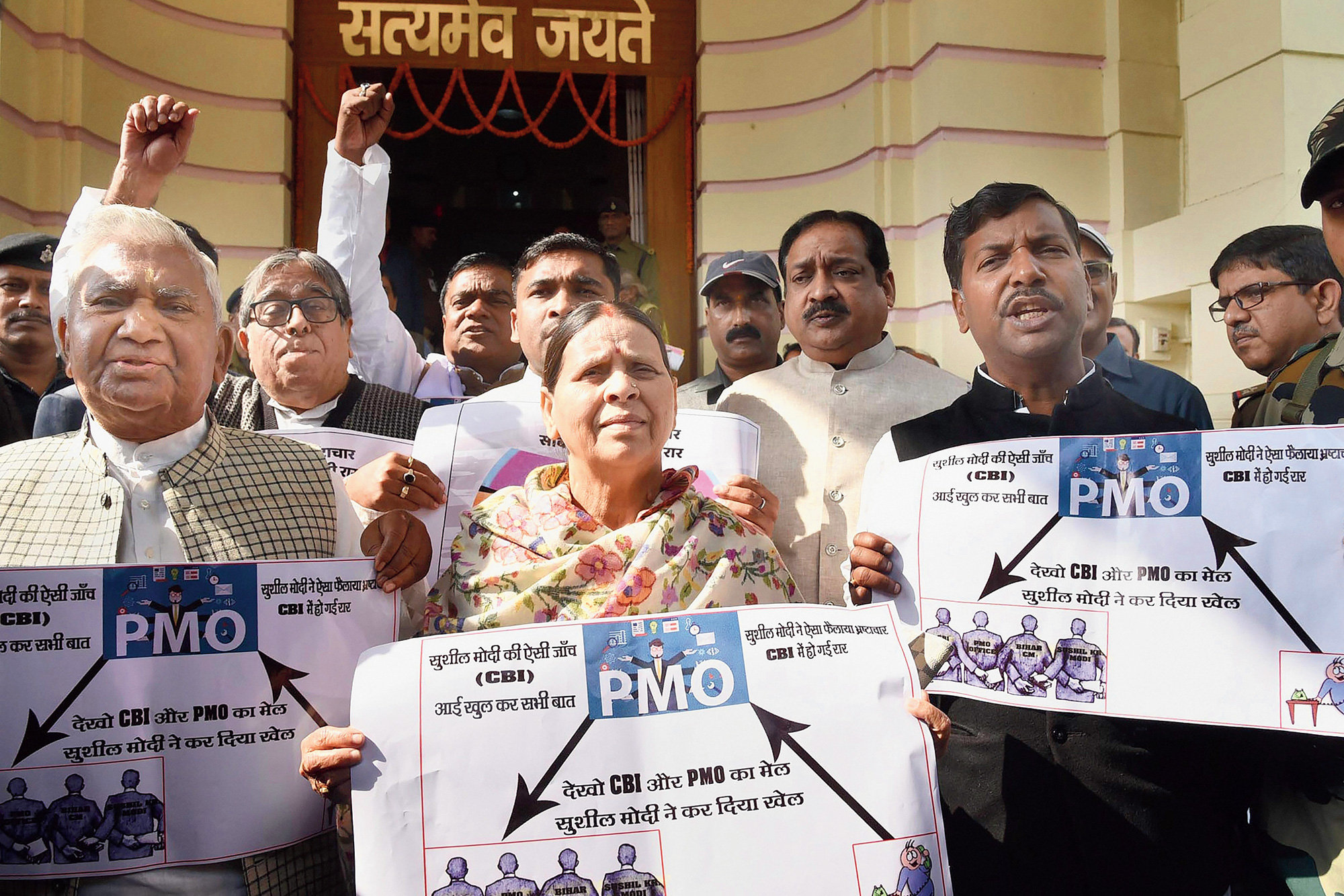 The Legislative Council witnessed unprecedented high drama on Wednesday as Rabri Devi sat on a dharna in its Well to protest the suspension of five Rashtriya Janata Dal (RJD) members for two days and vowed not to move out till it was revoked, and had her say in the end.

She was joined by MLCs of her party and the Congress, including its state president Madan Mohan Jha and Prem Chandra Mishra.

Her son, leader of the Opposition in the Assembly Tejashwi Prasad Yadav, arrived with RJD MLAs and staged a protest at the entrance of the Council, blocking it completely. They shouted slogans against the central and state governments, particularly targeting deputy chief minister Sushil Kumar Modi.

Finally, Council acting chairman Harun Rashid blinked. He opened a channel for negotiations and assured the members that the suspension of the five MLCs would be revoked when the House convenes at 12 noon on Thursday.

Old-timers said the sit-in was unprecedented in the 97-year-old history of the Upper House.

The drama began with the post-lunch session at 2.30pm. The RJD had been pressing for an adjournment and discussion, asserting that benched CBI director Alok Verma had revealed how the investigation agency had been used by the BJP and deputy chief minister Modi to frame Lalu Prasad, including in the IRCTC (Indian Railway Catering and Tourism Corporation) land-for-hotels case.

RJD MLCs trooped into the Well, prompting acting chairman Rashid to adjourn the House till 3pm. The same scenes continued when the session resumed. The entreaties of the acting chairman to maintain decorum fell on deaf ears.

Though Rashid pressed ahead with the legislative work of the House with the support of the treasury benches, RJD MLCs who were already in the Well started gesturing aggressively towards him. Marshals were called, but the ruckus continued.

At this point, Rashid suspended RJD MLCs Subodh Kumar, Dilip Rai, Qamar Alam, Radha Charan Shah and Khurshid Mohsin for two days — November 29 (Thursday) and November 30 (Friday). The suspension meant they would not be able to participate any further in the ongoing winter session.

The turn of events angered Rabri, who called Rashid’s action wrong and motivated. She, along with RJD state president Ram Chandra Purbey and other legislators, sat on the dharna.

After some time, Rashid called Janata Dal United legislators Dilip Kumar Chaudhary, Ram Bachan Rai, Reena Devi, Shiv Prasann Yadav and CPI MLC Kedar Nath Pandey and others to defuse the situation. They met Rabri and requested her for a discussion. She sent a few RJD legislators for the purpose and talks went on for around two hours inside Rashid’s chamber.

Finally, Rashid and the legislators who had been participating in the talks, went to meet Rabri and resolved the stalemate.

“Rabri Devi has agreed to end the dharna. A compromise has been reached. The suspension of the five MLCs will be revoked when the House meets tomorrow (Thursday). The problems with the mikes (in the internal public address system) as complained by the legislators will be removed,” Rashid said after meeting Rabri.

A couple of minutes later, a triumphant Rabri walked out of the House. “We are here to work for the people who elect us. Our entire fight and

dharna was to ensure that the public’s voice is heard. We fought for their prestige. There was nothing personal in it,” Rabri said.