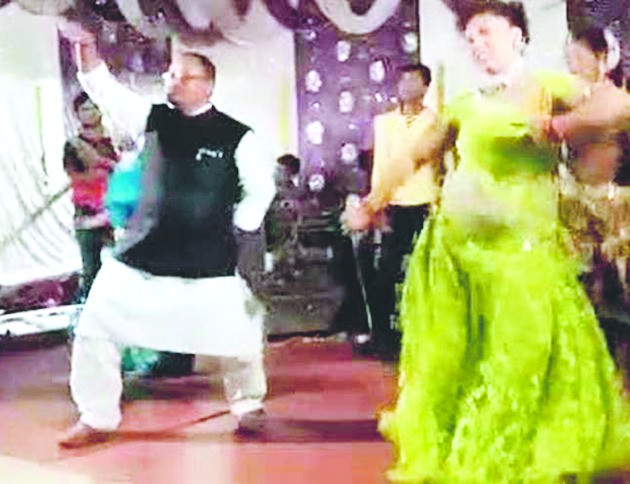 The video shot at a wedding ceremony in Bhojpur district recently invited sharp criticism from Gopal's political opponents, who described his behaviour as highly "objectionable".

"We can't expect such indecent behaviour from a legislator and that too at a public place," said the MLA's archrival and Congress leader Mritunjay Singh Ganga. The Bhagalpur district committee of the Congress also demanded action against the ruling party MLA from Gopalpur.

Initially, Mandal claimed that the video was doctored and it was a conspiracy to drag him into a fresh controversy. However, Mandal later conceded that he had recently visited Ara in Bhojpur district to attend a wedding function, where he danced with some professional dancers.

"Since I am an artiste by birth, I couldn't restrain my emotions and danced with the girls just to entertain the people there. There is nothing in the video, which could be construed as objectionable," Mandal told The Telegraph over phone on Sunday.

To drive home his point, the MLA said he was working with Bhojpuri film producer and director Kunal Singh on a Bhojpuri movie depicting the love stories of politicians. The film would be first released in Angika (language spoken in Bhagalpur and its adjoining districts) and subsequently be dubbed in other regional languages, he added.

Mandal had earlier played a pivotal role in the release of a Bhojpuri film Khagaria Wali Bhauji.

Last week, the JDU suspended the MLA for making a controversial statement about chief minister Nitish Kumar's decision to ban the sale of country liquor from April 1 and asserting that he would indulge in "politics of murder".

Sources said the main cause of Mandal's immediate provocation was police action against him in connection with the assault on one Fatto Pandit, a resident of Bhawanipur under the jurisdiction of Naugachia police station on February 22. Fatto, in his complaint lodged with Rangra police station, had alleged he was beaten up by the MLA for refusing to follow the latter's orders.

The MLA's trouble deepened further following interrogation of his three bodyguards accompanying him on the date of the incident. Naugachia superintendent of police Pankaj Sinha said the legislator's bodyguards were quizzed.

"The police are trying to ascertain the identity of the woman, who was travelling with the MLA on the day the incident happened with Fatto," said Sinha, before adding that the role of the legislator in the murder of an advocate and threat to a political party activist, Kamleshwari Mandal, was also being verified.

Sinha said over a dozen cases were pending against him both in Naugachia and Bhagalpur. "The investigating officer of the Fatto assault case has been asked to submit chargesheet at the earliest," the SP added.

Mandal first hit the headlines when he threatened to slash the tongues of his political rivals. In addition, he allegedly threatened a deputy superintendent of police to push him into the Ganga from a bridge in Bhagalpur when the latter warned to initiate action against him for violating traffic rules.