Haunted? Fear not, ghostbuster in town

Do you get nightmares? And hear sounds of anklets when you wake up? Or feel something is not quite right? Help is at hand. Patna boy and paranormal investigator Jay Alani is in town and will be around for the next three months. He lives in Nageshwar Colony and has already busted two cases. 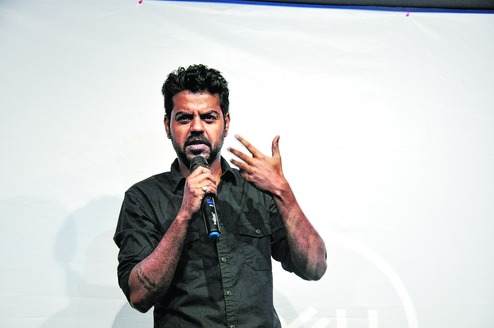 Patna: Do you get nightmares? And hear sounds of anklets when you wake up? Or feel something is not quite right? Help is at hand. Patna boy and paranormal investigator Jay Alani is in town and will be around for the next three months. He lives in Nageshwar Colony and has already busted two cases.

Jay was talking about his paranormal investigation at a paranormal discussion, "Haunted Talks", organised by social media portal Amazing Bihar Jharkhand at Work Studio Co-Working in Kankerbagh on Saturday. "In one of the cases, three girls who were residing in a rented accommodation near A.N. College were experience some unusual activity at their place," Jay said. "They used to hear sounds of anklets at midnight, besides getting nightmares. They had moved there around a fortnight ago. The boyfriend of one of the girls contacted me. I visited the place and found high levels of negative energy there. There was no ghost, but the landlord, a lady who worshipped Goddess Kali, possibly indulged in black magic. I found evidence, a corrupted Swastika sign (in reverse) drawn on nine doors and five windows, considered very bad according to Vastu. The girls have since shifted to another place and are not experiencing anything unusual any more."

In the second case, a 15-year-old girl from Shastri Nagar was said to be possessed but was later found to be acting. "She was in love with some guy but wanted to reveal it all through acting," said Jay.

Jay shared such experiences from his paranormal investigations in the last 10 years. The more hair-raising ones were from Kuldhara village, around 20km west of Jaisalmer in Rajasthan and Lambi Dehar mines at Mussorie.

"Kuldhara, a township of 84 villages, disappeared overnight," said Jay, "I was investing Kuldhara around 2.30am when I heard footsteps and knew for sure people were following me. For around half an hour, I didn't take notice as I don't get scared. But after 30 minutes, I found myself surrounded by six wolves. I got into attack mode after which the wolves retreated in 10 minutes. I have come across wolves, snakes, bats many times before but what was odd is that wolves are usually not to be found in deserts."

His investigation at the Lambi Dehar mines near Mussorie was also fascinating. "Around 20,000 labourers died at the place in one day, after which the mines were abandoned," said Jay. "It is now said to be inhabited by a witch. When I began probe, I got mad readings on my electromagnetic field meter and temperature meter, as there was a huge temperature variance. I captured light images and many other paranormal evidences. However, nothing unusual happened, unlike at Kulhara. It is not necessary that paranormal investigators come across unusual activity every time. Sometimes it takes us 2-3 days to notice it and sometimes we return without finding any."

Jay, 28, has done a course in paranormal investigation from New England Society of Psychic Research (founded by Ed and Lorraine Warren of the Conjuring fame).

He is based in Mumbai where he is engaged in writing, acting and directing short films. He has also authored some books, including The Bihari Theory.

Among the gadgets he uses are electromagnetic field meter, electronic voice phenomenon, infra-red thermometer, ghost box and P- SB11 radio-frequency. "A ghost box shows the presence of ghosts through light and its direction through the compass attached to it," Jay said.