Advertisement
Home / Bihar / Give it back, Birmingham

Give it back, Birmingham

Sultanganj residents on Monday marked Buddha's birth anniversary with a vow to mount pressure on the Centre to bring a Buddha statue back from a Birmingham museum. 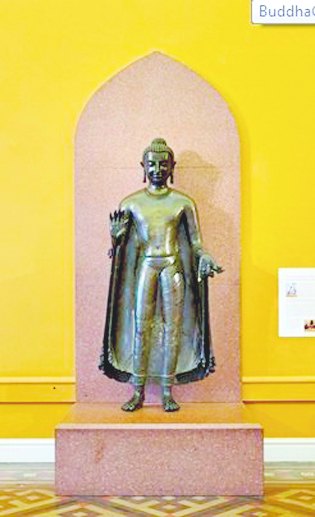 Sultanganj residents on Monday marked Buddha's birth anniversary with a vow to mount pressure on the Centre to bring a Buddha statue back from a Birmingham museum.

The 7th Century AD statue, known as Sultanganj Buddha, is testimony to the skills of sculptors and metal workers of ancient India.

"Lakhs of pilgrims come to Sultanganj to fetch the holy Ganga water before proceeding to Baidyanath Dham in Deoghar. So, Buddha's statue should be here," said Uday Chandra Jha, a college teacher.

"Ironically, the statue is kept inside Buddha art gallery at the Birmingham museum, established in 1864. Why shouldn't our government claim it?" he asked. #Shanker Bind of Jan Sansad urged public representatives to raise the issue.

Dipak Kumar, a social worker here, said: "Revival of the ancient Vikramshila Mahavihar is on the cards. The statue would be ideal here when the ancient seat of learning is included in the Buddha circuit."

The Birmingham-based museum's website claims the Sultanganj Buddha is a representation of Gautama Siddharth, the founder of Buddhism, who lived in India and Nepal around 6th century BC. Over 2m tall and weighing over 500kg, it is the only surviving larger-than-life copper statue of this period.

According to Uday Chandra Jha, noted historian late Bhagwat Sharan Upadhay had, in his book Bharatiya Murtikala ki Kahani, compared the statue with other standing and sitting Buddha statues of the Gupta period.

In 1861-62, British railway engineer E.B. Harris was working on construction of the Sultanganj railway station, some 28km west of Bhagalpur. When he began excavating, a mound of bricks - remains of an abandoned Buddhist monastery - surfaced. The statue was amid the ruins.

Former Birmingham mayor Samuel Thornton heard of the discovery and was keen that it be displayed at the museum. "He paid £200 to get the statue shipped to England via Calcutta, and donated it in 1864, making it one of the first pieces to enter Birmingham's collection," Jha said.

Jha said a former managing director of Archaeological Survey of India, Gautam Sengupta, had indicated many old heritage items, along with the Buddha statue, were at the Birmingham museum.

Sultanganj JDU's MLA Subodh Roy said he would take the initiative to bring the statue back.