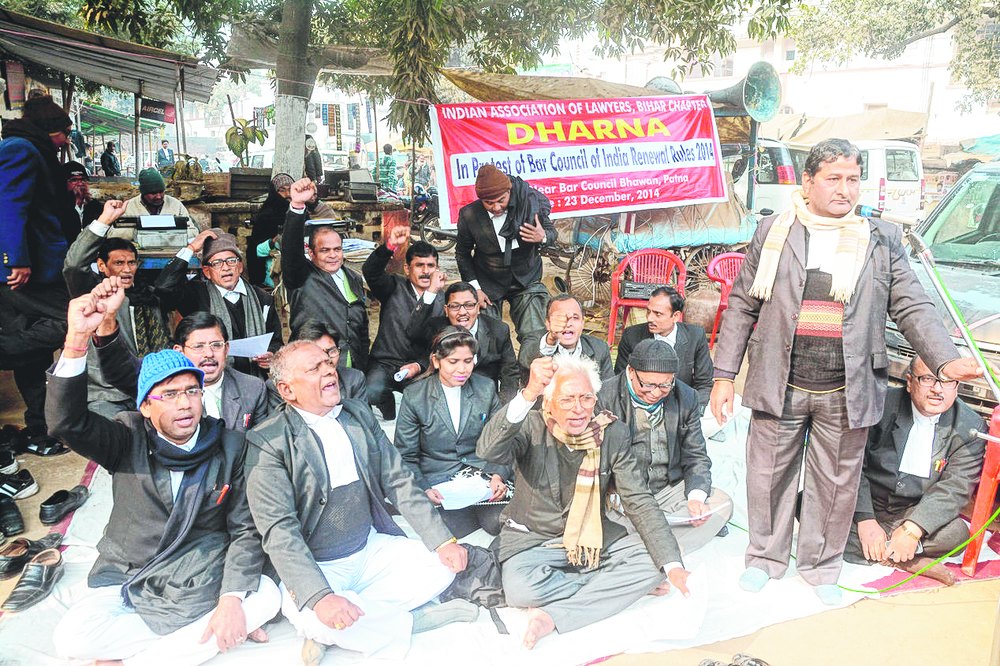 File picture of lawyers protesting the Bar Council of India Certificate of Practice and Renewal Rules, 2014, in Patna in mid-December

Lawyers of Patna High Court are up in arms against the advocates on record examination conducted by the court every year since 2010.

The reason, forwarded by the lawyers, is that the examination was being conducted to debar and discourage new advocates from practising in the high court.

Commencing in 2010, the court made it mandatory for the lawyers practising in the high court to clear the examination, for further practice. In 2010, when the advocates on record system was introduced, the high court had granted status of advocate on record to those lawyers who simply filed application with the court without going through any examination.

Advocate on record (AOR) is someone, who is entitled to file petition in the court and sign ' vaqalatnama' (right to plead on behalf of someone).

The agitating lawyers will also hold a meeting on January 6 to decide the course of action. They will also meet the Chief Justice of India (CJI), H.L. Dattu, when he will be here for the second convocation of Chanakya National Law University in February.

Other than the Supreme Court of India, no other courts in the country conduct the AOR examination for its own.

In 2010, Patna High Court had introduced the AOR system similar to that prevailing in the Supreme Court.

The AOR examination consists of question papers related to pleading and drafting, culprit law, procedural law and professional ethics and advocacy eliciting views on issues such as how to harmonise duties as a lawyer and an officer of the court, whether or not to take up cases inconsistent with one's personal value system and the way lawyers should conduct themselves.

Niranjan Singh, the president of Voice against AOR, an organisation spearheading the protests against the examination, said: 'The imposition of the AOR exam by the high court is arbitrary and unwarranted. The exam has been made in effect through bringing in an amendment in chapter 24 of the Patna High Court Rules, 1916, which to some extent gives power to the high court to frame rules for smooth functioning of the court by imposing reasonable restrictions. However, the court by making the AOR exam mandatory had exceeded its power, which can only be done by an act of Parliament or Supreme Court.'

Singh, who is a Patna High Court lawyer, said: 'Under Section 30 of the Advocates Act, 1961, it is being said a registered advocate (enrolled with the Bar Council) can practice anywhere in the country. So what is the need of conducting the AOR examination? Since 2010, as the Bar Council of India used to conduct an examination (All India Bar Council Exam), which is mandatory for all new advocates, then why is the high court conducting a separate AOR exam?'

Senior high court lawyer Dinu Kumar said: 'As the bar council conducts an examination, the AOR exam was not necessitated. The move restricts new comers from coming into the legal profession bringing injustice to them.'