The Bihar tourism development corporation's Swiss cottages at the Sonepur fair are much in demand among foreigners who want to witness what is billed as Asia's largest cattle fair. 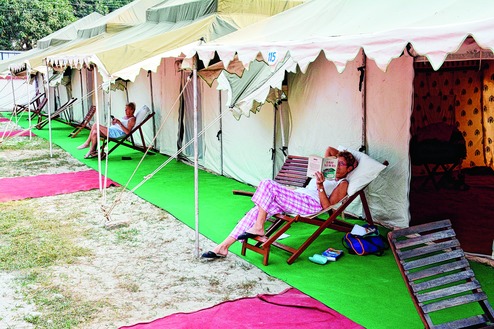 Sonepur: The Bihar tourism development corporation's Swiss cottages at the Sonepur fair are much in demand among foreigners who want to witness what is billed as Asia's largest cattle fair.

The tourism corporation will set up 20 such cottages at the fair that will be available from November 4, which is Kartik Purnima. Around 1,000 foreign tourists avail the Swiss cottage facility every year to soak in the fair.

"So far 45 bookings have already been done for the Swiss cottages and several queries are still pouring in every day. All the bookings have been made by foreign tourists, and most of queries are also coming from foreigners," a senior tourism corporation official said on Monday.

"Majority of the cottages have already been booked for the first week as several of the bookings made by the foreign tourists so far are for groups having six or more people," said the tourism corporation official.

There will be a dedicated kitchen for tourists staying in these cottages, and payment for the food will be extra. SUVs and buses for hire will be stationed at the fair site for tourists who want to go sightseeing.

The corporation will also set up a tourist information centre where guides will be deputed. The guide service will be free of cost.

There will be a special one-day package in which tourists from Patna would be taken to the fair and other important places. A seat on the bus for the package will cost Rs 200 per person, and include snacks that will be provided at the fair venue before returning to Patna.

Though the annual fair has witnessed several changes over the years, particularly due to restrictions imposed to prevent sale of wild and endangered animals, millions of people visit every year.

The fair used to commence with the ceremonial bath on the occasion of Kartik Purnima when it was solely organised by the Saran district administration. Since 2012, the state tourism department was assigned the job and the fair is now jointly organised by the department and the Saran district administration, and inaugurated a day or two before Kartik Purnima. This year, the fair will be inaugurated on November 2.