Chief minister Nitish Kumar on Wednesday sought to know from top police officials the reasons for a drop in communal incidents at places that were previously considered sensitive and a rise in such occurrences at new places. 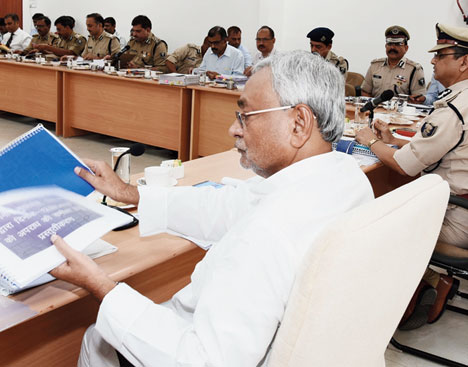 Patna: Chief minister Nitish Kumar on Wednesday sought to know from top police officials the reasons for a drop in communal incidents at places that were previously considered sensitive and a rise in such occurrences at new places.

"We need to know the reasons behind this shift in communal incidents. There is a need for continuous special vigil in sensitive areas. District magistrates and superintendents of police must visit such places and also interact with peace committee members," Nitish said.

The chief minister also pointed that Muharram and Dussehra were nearing and asked his top officials, including chief secretary Deepak Kumar, director-general of police K.S. Dwivedi and home secretary Amir Subhani, to interact on this with all district magistrates. He also stressed the need for sensitising regional officials about the issue.

Nitish was speaking at a closed-door review meeting of law and order in the state at his 1, Aney Marg official residence.

His worry stemmed from the communal flare-ups over the last one year, and with his secular credentials, he is in no mood to take risks at a time when Lok Sabha elections are approaching.

This became clear when he directed the police and administrative brass to ensure that culprits involved in communal incidents are put on speedy trial.

"There is a need to expedite the process of ensuring punishment to such people. There cannot be any compromise over this come what may or whoever is involved," Nitish said at the nearly six-hour meeting.

The meeting also focused on the trend of more and bigger religious processions being taken out in different parts of the state on the occasion of festivals. The need for having adequate deployment of security forces was also discussed on the occasion.

The son of a Union minister had to be arrested for communal flare-up in Bhagalpur earlier this year, while another central minister hailing from the state has been criticised from various sections of the society for his utterances on communally sensitive issues.

Various burning issues like crime control, improving law and order situation, police patrolling, mob lynching, security of women and hostels, murder, rape, rail and bank dacoities, videos of crimes being made viral, crime against scheduled castes and scheduled tribes, activities of professional criminals, cyber security and several others were discussed threadbare at the meeting that lasted for around six hours.

Nitish expressed worry over attacks by the sand mafia, land mafia and other anti-social elements on the police and called them "intolerable". He asked senior officials to ensure immediate and strict action against such elements.

Nitish also exhorted the senior police officials to keep themselves abreast of the latest crime fighting techniques prevalent at the national level, and also ensure that forensic tests are completed within a time frame.

The chief minister pressed for immediate separation of the law and order wing of the police from the investigation one. He pointed that over 60 per cent disputes are connected in some way or other with land, and asked senior officials to ensure that circle officers and station house officers hold "janata darbars" every Saturday to resolve them.

In the light of disputes over jurisdiction of police stations, Nitish gave directions that if a victim reaches any other police station by mistake, instead of the one where a crime has taken place, his or her FIR should be registered and then transferred to the police station concerned.

Nitish also interacted via video-conferencing with divisional commissioners, range DIGs, district magistrates and superintendents of police of all the districts and sought information on law and order in their respective districts.

For effective crime control, the chief minister has also asked the senior officials to have face to face talks with officers in the field.

Home secretary Subhani said Nitish also asked the top home department and police officials to ensure that every police station gets a functional landline telephone and its number should be publicised well among the people in its area.

Additional director-general (police headquarters) S.K. Singhal said a proposal to purchase 850 new vehicles has already been sent to the government. At present there are 1,064 police stations in the state.

Singhal also pointed that action against 373 tainted police personnel has been taken and the proceedings and cases were in different stages.

"We have been asked to analyse crime in different areas and take action," Singhal added.