Advertisement
Home / Bihar / Baywatch to Bhojpuri with a clause

Baywatch to Bhojpuri with a clause

Bollywood star Priyanka Chopra's mother Madhu Chopra on Sunday said her daughter has no problem in acting in Bhojpuri films provided the script is good. 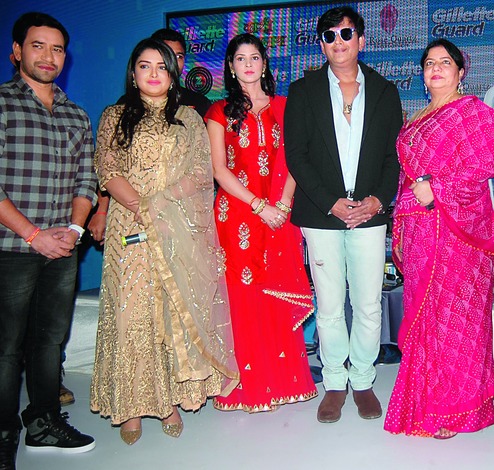 Patna: Bollywood star Priyanka Chopra's mother Madhu Chopra on Sunday said her daughter has no problem in acting in Bhojpuri films provided the script is good.

Madhu said this during the promotion of Bhojpuri film Kashi Amarnath produced by the Baywatch girl Priyanka Chopra under her banner Purple Pebble Pictures.

Priyanka, who has A Kid Like Jake alongside Homeland star Claire Danes and Big Bang Theory actor Jim Parsons, lined up in Hollywood for 2018 was, however, not present at the promotion.

The film's cast Ravi Kishan, Dinesh Lal Yadav, Amrapali Dubey and Sapna Gil were present with co-producers Siddharath Chopra (Priyanka's younger brother) and Neha Shandilya. The writer-director of the film, Santosh Mishra, was there too.

On why Priyanka hasn't done a Bhojpuri film considering even Bollywood biggies such as Amitabh Bachchan has done one ( Ganga, 2006), Priyanka's mother Madhu said: "If there's a good script she shouldn't have a problem (in working in a Bhojpuri film). Language is not a barrier for her. I shall ask her to work in Bhojpuri films if the script is suitable."

Kaashi Amarnath is set to hit theatres on the eve of Diwali - October 18 - in Bihar, Jharkhand and Uttar Pradesh. This is the second Bhojpuri film produced by the Ram Leela actor after the 2016 Bam Bam Bol Raha Hai Kashi, produced by the mother-daughter duo with Dinesh Lal playing the lead. Madhu said next time she will try to shoot the film particularly in Bihar.

"I have roots in Bihar. I was born in undivided Bihar and I always feel happy whenever I come here," Madhu said. Kishan said the film sends a strong message on how tobacco causes cancer leading to early deaths.

Kishan, also a BJP leader, said: "The way our Prime Minister Narendra Modiji has launched Swachh Bharat Abhiyan to keep cities clean in the same way this movie will send a strong message on how to fight tobacco addiction."