Four years ago, Sweety Kumari, a girl belonging to a humble background from Barh (around 60km east of Patna), didn't know about rugby. Neither did her parents. 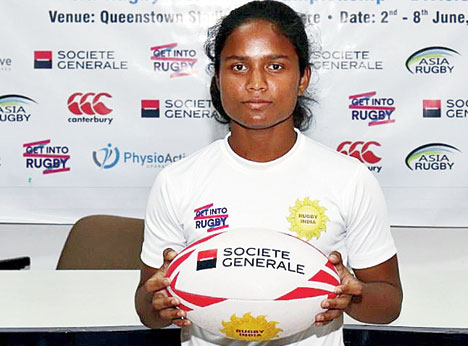 Patna: Four years ago, Sweety Kumari, a girl belonging to a humble background from Barh (around 60km east of Patna), didn’t know about rugby. Neither did her parents.

The same girl will catch a flight to Singapore at 8pm on Thursday as a member of the Indian women’s rugby team to compete in the Asia Rugby Women’s Championship to be held at Queenstown Stadium in Singapore between June 2 and June 8.

The 18 year-old daughter of bank agent Dilip Kumar Choudhary and Anganwadi sevika Pushpa Kumari had proper training, not even a place to practise. Sweety has forayed into Team India the second time. The last time, she represented the country was as part of the Under-17 Indian team last November in the qualifier round of the Youth Olympic Games Rugby Seven Qualifiers held in Dubai. The team had secured the fourth position then.

“I was an athletic before becoming a rugby player. I was into athletics since 2009 and played till 2014 till rugby happened. However, I never played any international event in athletics,” said Sweety from Mumbai airport, waiting to catch her Singapore flight.

“I was introduced to rugby by the general secretary of Rugby Football Association of Bihar Pankaj Kumar Jyoti after he saw me in an athletic event in Barh. I don’t know what he saw in me but after seeing me in the event, he asked me to give it (rugby) a try. I had no idea about rugby and had even enquired about it from Pankaj Sir that what it was exactly.”

Sweety added: “Pehle khelo to samajh mein aayega (play the sport, only then will you realise). He also told me that a state-level rugby tournament was about to be held in Barh. So I just followed his words and started keeping watch on rugby players who had come over to Barh for the tournament. I formed a team with help of some local girls and some from outside who knew the sport. One rugby team requires seven people but we were short of one but we were allowed to play the tournament. That’s how I was introduced to rugby.”

She said she along with few other girls contacted a national-level rugby player, Gaurav Kumar of Barh. “After playing the game at the state-level, we were so excited that we wanted to continue it. I wanted to practise and learn the tricks of the game. So, we contacted Gaurav bhaiya, who taught us the sport for four years.”

So what does Sweety aim for now? “I have made it to Team India. Now, I want to play as many as international events as I can. I am a huge fan of American rugby player Perry Baker.”