H.C. Verma, a physics teacher of repute, will be conferred with the Maulana Abul Kalam Azad Shiksha Puruskar, one of the top awards in recognition of outstanding contribution in the field of education in Bihar, at an Education Day function on Saturday. 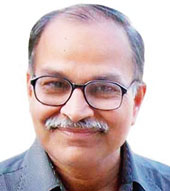 Patna: H.C. Verma, a physics teacher of repute, will be conferred with the Maulana Abul Kalam Azad Shiksha Puruskar, one of the top awards in recognition of outstanding contribution in the field of education in Bihar, at an Education Day function on Saturday.

The Maulana Abul Kalam Azad Shiksha award was instituted by the Bihar government in 2007. It carries a citation and Rs 2.5 lakh in cash and is given to an eminent person for his outstanding contribution in the field of education. Bihar is the first state in the country to celebrate Education Day in the memory of the country's first education minister, Maulana Abul Kalam Azad.

Later, in 2008, the Government of India, too, decided to observe November 11 as National Education Day.

Saturday's function will be held at Sri Krishna Memorial Hall.

Verma, apart from being a popular teacher of physics whose books are followed by engineering students, also runs Shiksha Sopan, a non-government organisation (NGO) whose purpose is to impart value-based education to students belonging to economically weaker sections of society. Shankar Kumar, a teacher at Patna Science College said: "Verma's work revolved around popularising physics education at the school and college level. We are very much pleased that the government of Bihar has decided to confer on him such a prestigious award."

Shankar Kumar also said: "Apart from writing several books on physics, he has also prepared a video in Hindi with the focus of making physics much easier."

Verma, born in Darbhanga district, completed his Intermediate and graduation from Patna Science College. He joined Patna University as a physics teacher and continued teaching there from 1980 to 1994.

In 1994, he joined IIT-Kanpur and announced his retirement this year.

Verma, who reached Patna on Friday evening, also attended a function of National Graduate Physics Examination, which is organised by the Indian Association of Physics Teaching.

The function was attended by physics teachers from Patna University, Magadh University, BRA Bihar University Muzaffarpur and other universities.

At the function, Verma gave teachers tips on how to popularise and make teaching of physics easier.

Verma said: "Teachers should focus on teaching physics with experiments. There are several low cost/no cost experiments through which physics education can be made easier." Verma stressed on activity-based physics teaching.