Honda Civic is making a comeback in India

The latest car, the 10th generation model, completes the range of sedans from Honda Cars India 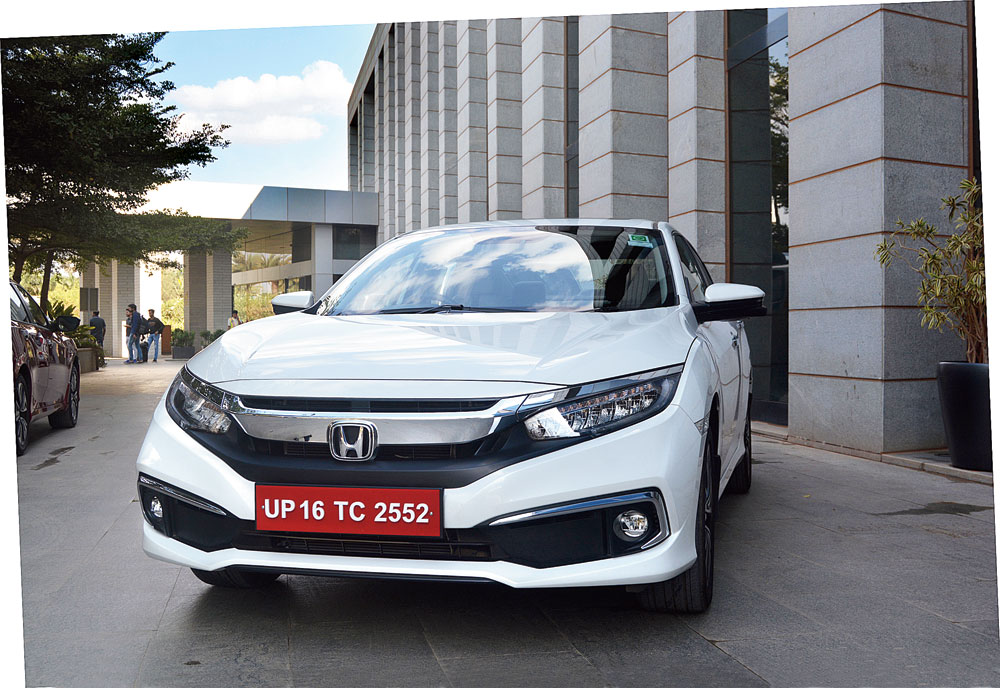 The controls are exactly where one would expect them to be, no hunting. Everything can be seen and read clearly and the view out front is clear.
Picture: Abhijit Mitra

There are two engine and gearbox options. One is a 1.8-litre petrol with a CVT (continuously varying transmission) that has also had steps programmed into it. The other is a 1.6-litre turbocharged diesel with a six-speed manual gearbox — it’s a first for a Civic in India.

Both of them are good for everyday driving, both in the city or on the highway. The diesel is the torquier of the two, so overtakes and such like manoeuvres that we were required to do on a two-lane road were despatched easier in that one. The petrol engine makes more power than one that was there earlier; possibly a manual would make it even more fun to drive. With the CVT, keeping the car in the power band needs a bit of revving. That said, refinement is good, so the engine noise isn’t a dealbreaker.

The diesel, naturally, isn’t as quiet as the petrol, and while it makes less power at the peak than the petrol, it’s certainly a more peppy car to drive with a higher peak torque that comes in fairly low down in the rev range. Couple that with the typical Honda short-throw, six-speed gearbox, and you have the ingredients that tempt you to wring the juice out of the motor. (Come to think of it, it would have been fun to have a manual shifter in the petrol as well to help with some spirited driving.)

This thought about spirited driving comes particularly as this car handled well on the twisty roads in Nandi Hills near Bangalore that we drove on. The steering in the diesel has more feel, probably because of the heavier engine up front, and just a shade of understeer. The 17” wheels with low-ish profile tyres also help keep the car going in the intended direction.

The suspension has been done nicely. There is none of the older car’s crashing through potholes or bad roads. Broken stretches are handled with poise. The ride height has been lifted 20mm in front and 15mm at the back for the India-spec car as well. So the belly-scraping over speed breakers is absent. The roads we were driving on did have quite a few in various sizes but none touched the car.

And all of this is available with pretty high fuel efficiency numbers.

Honda has brought back the Civic into a market that has shifted towards SUVs. But this is an attractive car with fuel-efficient engines that should still remain in contention for wallet share of buyers looking for a stylish vehicle.

The Honda Civic, the executive sedan from the company, is making a comeback to the Indian market after a gap of about six years. In the process, it has skipped one generation of what is one of the longest-surviving names in the global automotive industry, having been in constant use since 1972. The latest car, the 10th generation model, completes the range of sedans from Honda Cars India. The other models in the range are the Amaze and the City below it and the Accord above.

Look at the Civic in the flesh and the first impression is of a sporty car. The broad, hunkered-down stance, the swoopy lines in general and that of the roof in particular, which gives the car a smooth coupe-like silhouette that ends in a stubby tail, clearly says that this car is meant for the owner who also wants to enjoy driving it.

Yes, it has got four doors, but the glasshouse shape, particularly on the sides, suggests that the focus is on the two front seats rather than the back. And the fastback styling just reinforces that impression.

Up front there is the broad chromed bar with the Honda logo getting pride of place in the middle — it is meant to give the car the distinctive family look — something that we have seen in last two launches from the company, the Amaze and the CR-V as well.

It is flanked by a hi-tech looking LED headlamp cluster that also has daytime running lights. There are two amber lights ahead of the front wheels. These are side markers and not turn indicators.

The new car is a shade broader and longer than the earlier model, but is about 20kg lighter. The wheelbase, at 2,700mm, however, remains the same. The creases on the flanks lead the eyes to the stubby rear end, which now sports two prominent C-shaped tail light clusters, to reflect the ‘C’ of Civic, the company says. Overall, this is a car that one would give at least a second look to.

Open the driver’s door, get in and shut it. The immediate feeling that one gets is that the car has wrapped itself around the driver. The floor is low and so is the seating position, a sense emphasised by the high central tunnel and the position of the gear lever — both the automatic and the manual. The controls are exactly where one would expect them to be, no hunting. Everything can be seen and read clearly and the view out front is clear. This is exactly how a sporty car should be. The rear view is a bit compromised though.

Overall interior space is good. Leg space at the rear is helped by the fact that there is space under front seats where the foot can go easily. All the seats are contoured well and with ample support. The light-coloured leather looks good too. And despite a sloping-down roof, there’s sufficient head room for average-sized adults at the back.

Cubby holes there are lots, and the use of an electronic parking brake has allowed Honda to create storage space where otherwise the parking brake lever would have been. There are aircon vents for the rear seats but no 12V socket or USB port. Both, plus an HDMI socket are there up front, although they are a little difficult to find as they are behind the storage space in front of the gear. But one can live with it.