Advertisement
Home / World / Yameen ‘trying to hold on to power’

Yameen ‘trying to hold on to power’

Maldives President plans to complain to poll panel about conduct of vote: Opposition 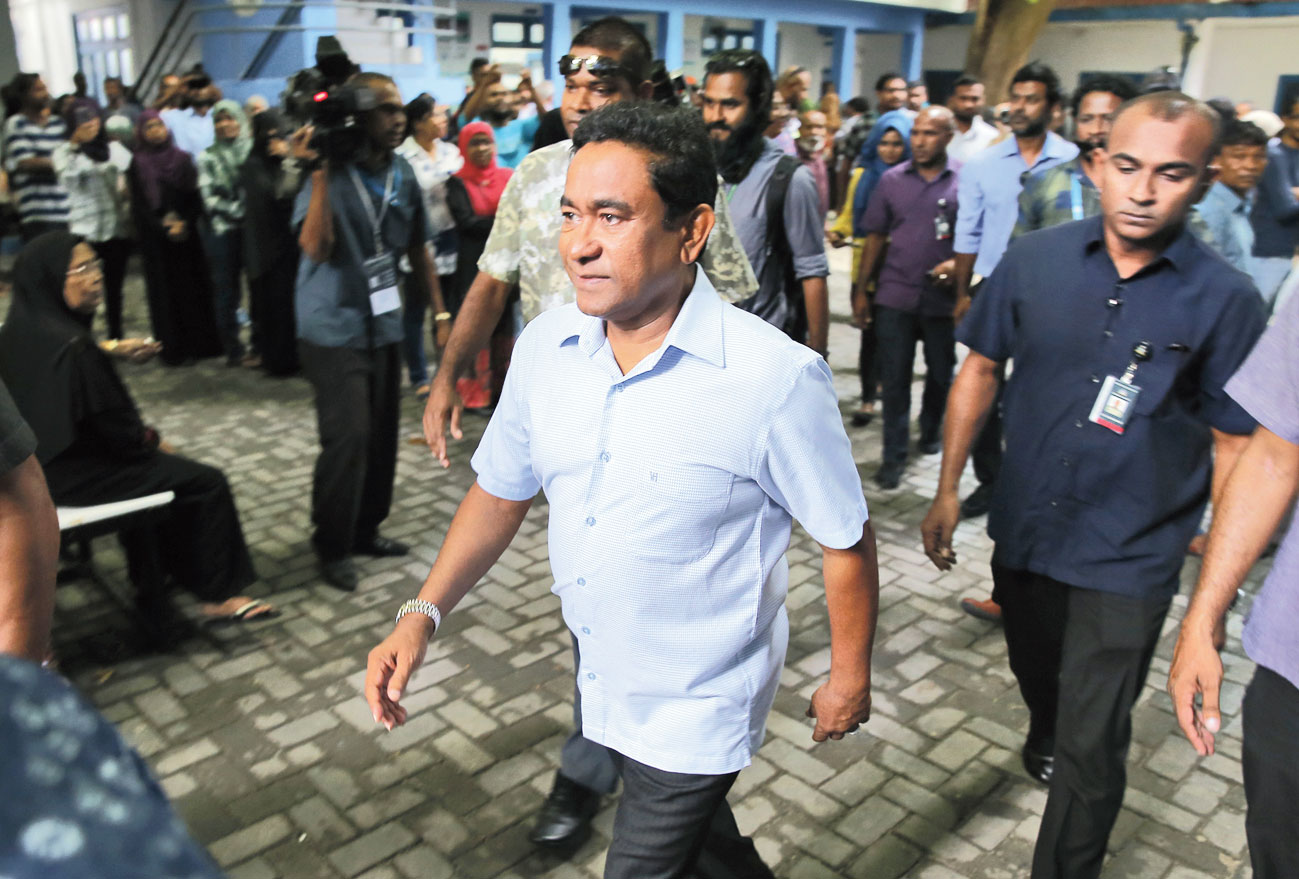 Maldives President Yameen Abdul Gayoom is working on how to stay in power despite having conceded defeat in this week’s election, the Opposition alliance said Wednesday.

Opposition spokesman Ahmed Mahloof said, according to government officials, Yameen is planning to complain to the Maldives Election Commission about the conduct of the vote and pressure the commission to delay releasing the final results on Sunday.

Mahloof said Yameen is also trying to get police officers loyal to him to prepare intelligence reports saying the election was flawed.

“It’s serious. After conceding the election he is trying to play dirty,” Mahloof said of Yameen. Provisional results released on Monday showed joint Opposition candidate Ibrahim Mohamed Solih decisively defeated Yameen with about 58 per cent of the vote in Sunday’s election.

Presidential spokesman Ibrahim Hussain Shihab noted that Yameen had conceded the election in a speech on Monday. He said Yameen accepted the results and pledged to ensure a smooth transition when his term ends on November 17.

However, Shihab did not comment on whether Yameen’s stance has changed since then.

The election outcome surprised many given Opposition warnings that the voting could be rigged. The EU didn’t send election observers because the Maldives failed to meet conditions for monitoring, and few foreign media were allowed into the country to cover the vote. The US, which earlier threatened sanctions if the elections were not free and fair, urged calm while the election results were being finalised.

Maldives became a multiparty democracy in 2008 after decades of autocratic rule.

However, after Yameen became President in 2013 the country lost many of its democratic gains. He jailed almost all his political opponents following allegedly flawed trials and forced some into exile. Yameen also consolidated power by exerting control over the courts, bureaucracy, police and the military.

Prime Minister Narendra Modi has been invited to the swearing-in ceremony of the Maldives’ President-elect Ibrahim Mohamed Solih in November, according to a media report on Thursday.

The President-elect had extended the invitation during a phone call by Modi, after Solih’s victory in the elections, spokesperson for Solih, Mariya Ahmed Didi, was quoted as saying in The Edition.

Modi had also invited Solih to visit India, Mariya said, adding that the President-elect had accepted the invitation.

The two leaders agreed to work closely together to further strengthen the close, friendly and good neighbourly relations between the two countries.

Maldives is the only SAARC country that Modi has not visited. AP, PTI