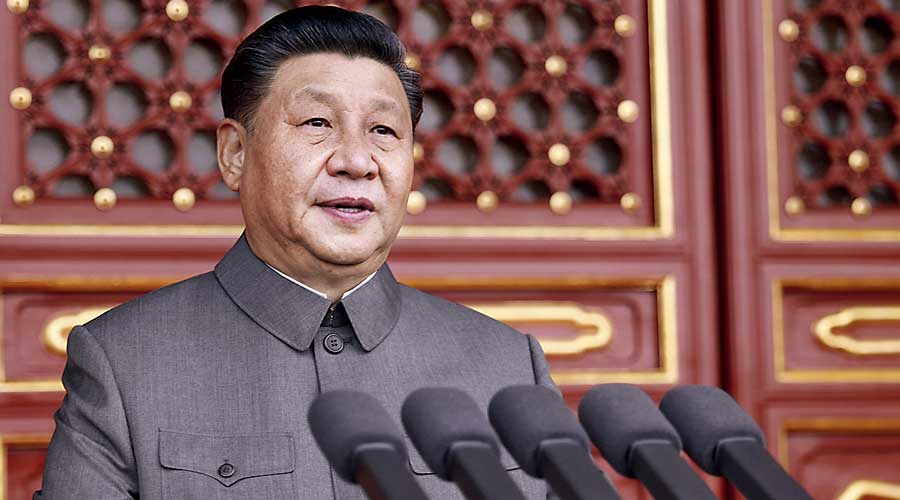 China’s rise is unstoppable, Xi Jinping declared. The country will not be lectured. And those who try to block its ascent will hit a “Great Wall of steel”.

Xi, the most powerful Chinese leader in generations, delivered the defiant message in a speech in Beijing on Thursday that celebrated 100 years of the Chinese Communist Party.

The speech was laden with symbols intended to show that China and its ruling party would not tolerate foreign obstruction on the country’s path to becoming a superpower. The event’s pageantry symbolised a powerful nation firmly, yet comfortably, in control: a crowd of 70,000 people waved flags, sang and cheered in unison.

Troops marched and jets flew overhead in perfect formations. And each time Xi made a pugnacious comment, the crowd applauded and roared approval.

At times, Xi’s strident words seemed aimed as much at Washington as at the hundreds of millions of Chinese who watched on their televisions. The biggest applause from the handpicked, Covid-screened audience on Tiananmen Square came when he declared that China would not be pushed around.

“The Chinese people will never allow foreign forces to bully, oppress or enslave us,” he said, clad in a Mao suit. “Whoever nurses delusions of doing that will crack their heads and spill blood on the Great Wall of steel built from the flesh and blood of 1.4 billion Chinese people.”

Xi’s address was one of the most anticipated of his nearly nine years in power and was all the more significant because he seeks to extend his rule. The celebration was Xi’s chance to cement a place, at least implicitly, on a dais of era-defining Chinese leaders, above all Mao Zedong and Deng Xiaoping.

Xi has sought to portray himself as a transformative leader guiding China into a new era of global strength and rejuvenated one-party rule. And the stagecraft was focused on conveying a modern, powerful nation largely at ease while much of the world still struggles with the pandemic.

He trumpeted the party’s success in tamping down Covid-19, reducing poverty and firmly quashing dissent in Hong Kong, the former British colony. With splashes of bellicose rhetoric, he dismissed challenges from abroad, asserting that Beijing had little appetite for what it saw as sanctimonious preaching.

As is customary in such speeches, Xi did not explicitly cite China’s tensions with the US and other rivals. But his effort to portray unity carried an unmistakable meaning as Beijing faces new challenges abroad.

The Joe Biden administration has cast the United States as leading a global struggle to defend democratic ideals against the spread of China’s model of authoritarianism. President Biden has worked quickly to rally western allies to press China over human rights and tensions in the South China Sea. Beijing has been especially incensed by Western sanctions over Hong Kong and the western region of Xinjiang, two places where Xi has tightened the party’s control with draconian measures.

“His speech clearly hinted at the United States; the audience in China won’t miss that,” Deng Yuwen, a former editor of a Communist Party newspaper who now lives in the US, said by telephone.

“His other message that stood out was that the party is the representative of the people’s and the whole country’s interests — nobody can try to split the party from the nation; they’re a unified whole.”

The theme of a party and nation united behind Xi will remain prominent in the lead-up to a Communist Party congress late next year, at which he is expected to gain a third five-year term as the party’s leader. That step would break with the expectation, set by his predecessor, Hu Jintao, that Chinese leaders stay in power for two terms. Xi’s speech will now be studied and acclaimed by party officials as part of the rituals that ensure they stay obedient.

“This was not a speech by a leader who is planning on stepping down from power anytime soon,” said Jude Blanchette, who holds the Freeman Chair in China Studies at the Center for Strategic and International Studies. “The extraordinary pomp and circumstance was designed to say: The Chinese Communist Party is strong, unified, and it isn’t going anywhere.”

For months, the party has flooded the country’s airwaves and plastered its newspapers with anniversary propaganda. Xi and other officials have travelled to historic sites to pay homage to the party’s revolutionary leaders. It has tightened security around the country, confining dissidents and stationing police officers and neighbourhood volunteers to keep watch across the capital for weeks.

Beijing’s intensive preparations for this anniversary point to how crucial controlling public memory is to China’s leaders, perhaps above all Xi, a leader who has cited his family roots in the party’s revolutionary heritage and his disdain for liberal values. Predictably, he made no mention in his speech of China’s setbacks over the decades of Communist Party rule, such as Mao’s Cultural Revolution and the deadly crackdown on the Tiananmen Square protests in 1989.