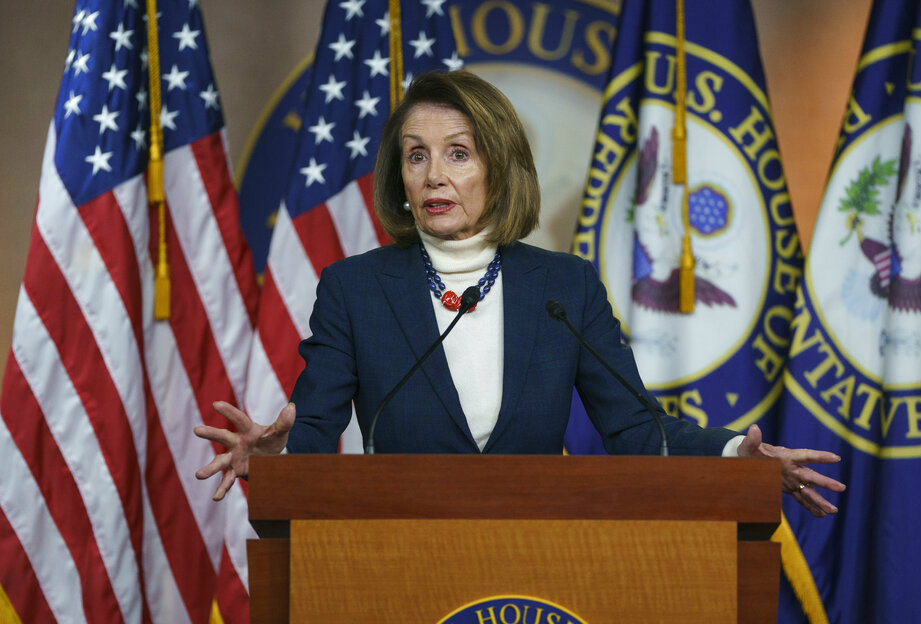 She imperiled his State of the Union address. He denied her a plane to visit troops abroad.

The shutdown battle between President Donald Trump and House Speaker Nancy Pelosi is playing out as a surreal game of constitutional brinkmanship, with both flexing their political powers from opposite ends of Pennsylvania Avenue as the negotiations to end the month-long partial government shutdown remain stalled.

In dramatic fashion, Trump issued a letter to Pelosi on Thursday, just before she and other lawmakers were set to depart on the previously undisclosed trip to Afghanistan and Brussels. Trump belittled the trip as a 'public relations event' — even though he had just made a similar warzone stop — and said it would be best if Pelosi remained in Washington to negotiate to reopen the government.

'Obviously, if you would like to make your journey by flying commercial, that would certainly be your prerogative,' wrote Trump, who had been smarting since Pelosi, the day before, called on him to postpone his January 29 State of the Union address due to the shutdown.

Denying military aircraft to a senior lawmaker — let alone the speaker, who is second in line to the White House, traveling to a combat region — is very rare. Lawmakers were caught off guard. A bus to ferry the legislators to their departure idled outside the Capitol on Thursday afternoon.

The political tit-for-tat between Trump and Pelosi laid bare how the government-wide crisis has devolved into an intensely pointed clash between two leaders both determined to prevail. It took place as hundreds of thousands of federal workers go without pay and Washington's routine protocols — a President's speech to Congress, a lawmaker's official trip — became collateral damage.

Pelosi spokesperson Drew Hammill said the speaker planned to travel to Afghanistan and Brussels to thank service members and obtain briefings on national security and intelligence 'from those on the front lines.' He noted Trump had traveled to Iraq during the shutdown and said a Republican-led congressional trip also had taken place.

Trump's move was the latest example of his extraordinary willingness to tether US government resources to his political needs. He has publicly urged the Justice Department to investigate political opponents and threatened to cut disaster aid to Puerto Rico amid a spat with the island territory's leaders.

Some Republicans expressed frustration. Sen. Lindsey Graham tweeted, 'One sophomoric response does not deserve another.' He called Pelosi's State of the Union move 'very irresponsible and blatantly political' but said Trump's reaction was 'also inappropriate.'

While there were few signs of progress on Thursday, Vice-President Mike Pence and senior adviser Jared Kushner dashed to the Capitol late in the day for a meeting with Republican Senate Majority Leader Mitch McConnell. And the State Department instructed all US diplomats in Washington and elsewhere to return to work next week with pay, saying it had found money for their salaries at least temporarily.

For security reasons, Pelosi would normally make such a trip on a military aircraft supplied by the Pentagon. According to a defence official, Pelosi did request the defence department support for overseas travel and it was initially approved. The official wasn't authorised to speak by name about the matter, so spoke on condition of anonymity.

The official said the President does have the authority to cancel the use of military aircraft.

Rep. Adam Schiff of California slammed Trump for revealing the closely held travel plans. 'I think the President's decision to disclose a trip the speaker's making to a war zone was completely and utterly irresponsible in every way,' Schiff said.

Trump's trip to Iraq after Christmas was not disclosed in advance for security reasons.

White House spokesperson Sarah Huckabee Sanders said Trump wanted Pelosi to stay in Washington before Tuesday, a deadline to prepare the next round of paychecks for federal workers.

'We want to keep her in Washington,' Sanders said. 'The President wants her here to negotiate.'

The White House also canceled plans for a presidential delegation to travel to an economic forum in Switzerland next week, citing the shutdown. And they said future congressional trips would be postponed until the shutdown is resolved, though it was not immediately clear if any such travel — which often is not disclosed in advance — was coming up.

Trump was taken by surprise by Pelosi's move to postpone his address and told one adviser it was the sort of disruptive move he would make himself, according to a Republican who is in frequent contact with the White House and was not authorised to speak publicly about private conversations.

While he maintained a public silence, Trump grew weary of how Pelosi's move was being received on cable TV and reiterated fears that he was being outmaneuvered in the public eye. Trump was delighted at the idea of canceling Pelosi's trip, believing the focus on the resources needed would highlight her hypocrisy for cancelling his speech, according to the Republican.

Trump has still not said how he will handle Pelosi's attempt to have him postpone his State of the Union address until the government is reopened so workers can be paid for providing security for the grand Washington tradition.

Pelosi told reporters earlier Thursday: 'Let's get a date when government is open. Let's pay the employees. Maybe he thinks it's OK not to pay people who do work. I don't.'

Trump declined to address the stalemate over the speech during a visit on Thursday to the Pentagon, simply promising that the nation will have 'powerful, strong border security.'

Pelosi reiterated she is willing to negotiate money for border security once the government is reopened, but she said Democrats remain opposed to Trump's long-promised wall. 'I'm not for a wall,' Pelosi said twice, mouthing the statement a third time for effect.

In a notice to staff, the State Department said it can pay most of its employees beginning on Sunday or Monday for their next pay period. They will not be paid for time worked since the shutdown began in December until the situation is resolved, said the notice.

The new White House travel ban did not extend to the first family.

About two hours after Trump grounded Pelosi and her delegation, an Air Force-modified Boeing 757 took off from Joint Base Andrews outside Washington with the call sign 'Executive One Foxtrot,' reserved for the first family when the president is not traveling with them. It landed just before 7 p.m. at Palm Beach International Airport, less than two miles from the president's private club.

A White House spokesperson did not answer questions about the flight.