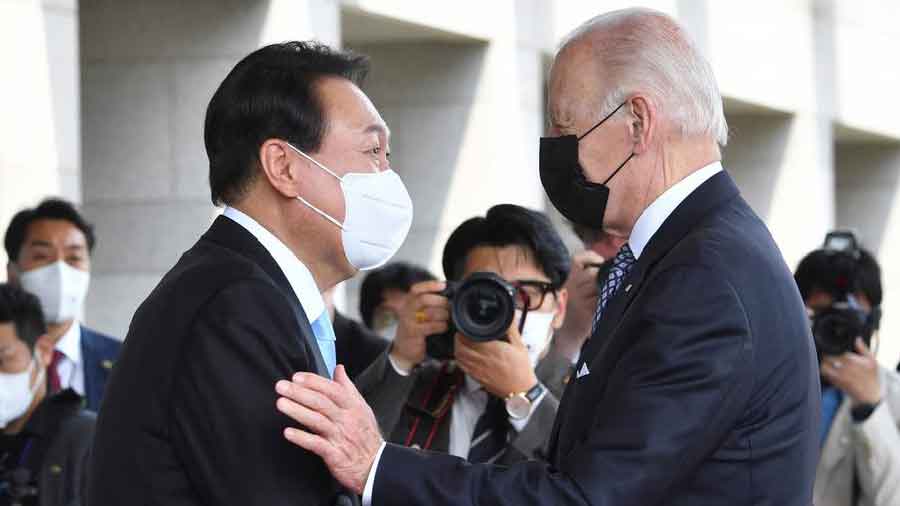 US President Joe Biden and newly elected South Korean counterpart Yoon Suk Yeol are studying means of expanding the scope and scale of joint military exercises on and around the Korean Peninsula.

Meeting during Biden's visit to Seoul on Saturday, as part of his first Asian tour as US president, the two leaders stressed their commitment to denuclearizing North Korea, saying it was in response to the "threat" posed by the autocratic country.

North Korea has upped its missile tests this year, carrying out some 16 separate tests, after 14 months of quiet during the beginning of Biden's administration.

South Korea is the first leg of Biden's Asia tour, which is also meant to take him to Japan.

He will unveil on Monday the new Indo-Pacific Economic Framework for Prosperity, a US initiative for regional trade. It's meant to set standards on labor, supply chains and the environment.

However, his tour is seen as a subliminal message of countering China, despite White House officials' attempts to play it down.

He added that Biden was also focused on setting up a "strong personal relationship" with Yoon, whose presidency only started less than two weeks ago.

Ahead of the meeting, Seoul was worried that Washington might be moving back to its "strategic patience" policy toward North Korea, which was adopted by former President Barack Obama's administration and constituted ignoring the latter until it shows true intentions to denuclearize.

However, many believed the approach allowed the North to further advance its nuclear arsenal instead.

Biden stressed his country's commitment to defend South Korea with nuclear weapons if necessary, after Saturday's meeting. He also expressed readiness to meet the North Korean leader, but only if the latter showed sincere interest in serious talks.