US pulling out of northern Syria; full withdrawal possible

US defense secretary Mark Esper said Trump has directed US troops in northern Syria to begin pulling out "as safely and quickly as possible." 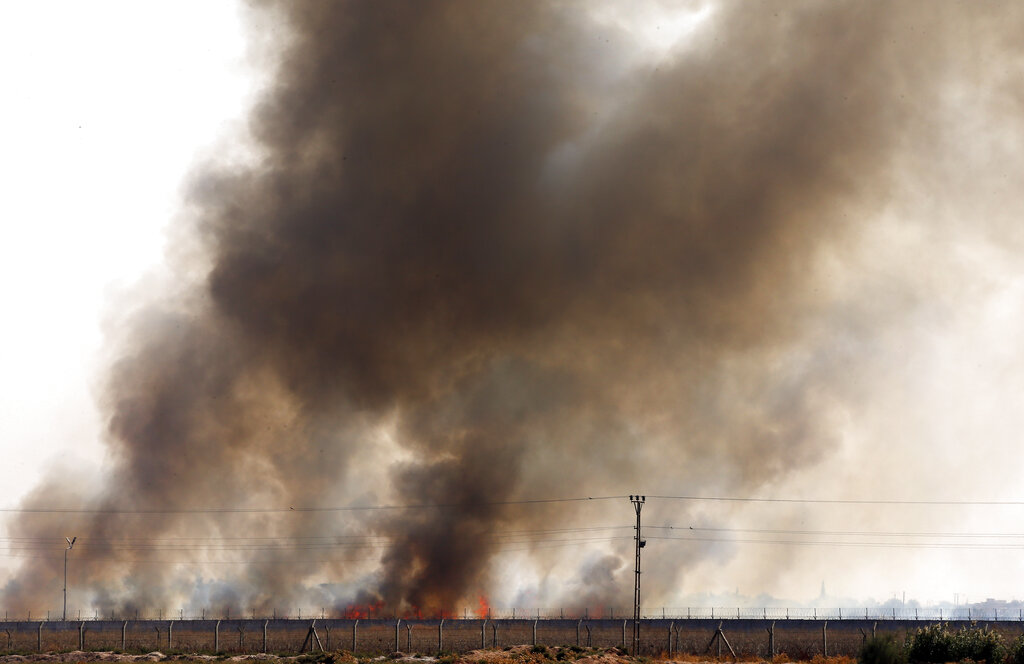 In this photo taken from the Turkish side of the border between Turkey and Syria, in Akcakale, Sanliurfa province, southeastern Turkey, smoke billows from fires on targets in Tel Abyad, Syria, caused by bombardment by Turkish forces on Sunday, October 13, 2019
AP
AP   |   Washington   |   Published 14.10.19, 09:56 AM

The United States appears to be heading toward a full military withdrawal from Syria amid growing chaos, cries of betrayal and signs that Turkey's invasion could fuel a broader war.

Defense secretary Mark Esper said on Sunday that President Donald Trump had directed US troops in northern Syria to begin pulling out 'as safely and quickly as possible.' He did not say Trump ordered troops to leave Syria, but that seemed like the next step in a combat zone growing more unstable by the hour.

'We have American forces likely caught between two opposing advancing armies and it's a very untenable situation,' Esper said.

This seemed likely to herald the end of a five-year effort to partner with Syrian Kurdish and Arab fighters to ensure a lasting defeat of the Islamic State group. Hundreds of IS supporters escaped a holding camp amid clashes between invading Turkish-led forces and Kurdish fighters, and analysts said an IS resurgence seemed more likely, just months after Trump declared the extremists defeated.

The US has had about 1,000 troops in northeastern Syria allied with the Kurdish-led Syrian Democratic Forces to combat IS. The Pentagon previously had pulled about 30 of these troops from the Turkish attack zone along the border. With an escalation of violence, a widening of the Turkish incursion and the prospect of a deepening conflict, all US forces along the border will now follow that move. It was unclear where they would go.

The Pentagon chief did not say US troops are leaving Syria entirely. The only other US presence in Syria is at Tanf garrison, near Syria's eastern border with Jordan. The US and coalition troops there are not involved in the Kurd mission, and so it seems highly unlikely the 1,000 being moved from the north would go to Tanf.

Critics say the US has betrayed the Kurds by pulling back in the face of Ankara's invasion, but Esper said the administration was left with little choice once Turkey President Recep Tayyip Erdogan told Trump a week ago that he was going ahead with a military offensive. Esper said the Kurds have been good partners, 'but at the same time, we didn't sign up to fight the Turks on their behalf.'

The Kurds then turned to the Syrian government and Russia for military assistance, further complicating the battlefield.

The prospect of enhancing the Syrian government's position on the battlefield and inviting Russia to get more directly involved is seen by Trump's critics as a major mistake. But he tweeted that it shouldn't matter.

'Others may want to come in and fight for one side or the other,' he wrote. 'Let them!'

Trump tweeted on Sunday night: 'The US has the worst of the ISIS prisoners. Turkey and the Kurds must not let them escape. Europe should have taken them back after numerous requests. They should do it now. They will never come to, or be allowed in, the United States!'

New Jersey senator Bob Menendez, the top Democrat on the senate foreign relations committee, said Trump is weakening America. 'To be clear, this administration's chaotic and haphazard approach to policy by tweeting is endangering the lives of US troops and civilians,' Menendez said in a statement. 'The only beneficiaries of this action are ISIS, Iran and Russia.'

The fast-moving developments were a further unraveling of US counter-terrorism efforts in Syria, and they highlighted an extraordinary breakdown in relations between the United States and Turkey, NATO allies for decades. Turkish troops have often fought alongside American troops, including in the Korean War and in Afghanistan.

Asked whether he thought Turkey would deliberately attack American troops in Syria, Esper said, 'I don't know whether they would or wouldn't.'

He cited an incident on Friday in which a small number of US troops fell under artillery fire at an observation post in the north. Esper called that an example of 'indiscriminate fire' coming close to Americans, adding it was unclear whether that was an accident.

Esper disputed the notion that the US could have stopped Turkey from invading in the first place. He said Erdogan had made clear he was going to launch his incursion 'regardless of what we did.'

Strongly critical of the Turks, Esper said 'the arc of their behavior over the past several years has been terrible.' He added: 'I mean, they are spinning out of the Western orbit, if you will. We see them purchasing Russian arms, cuddling up to President Putin. We see them doing all these things that, frankly, concern us.'

The chairman of the House Foreign Affairs Committee, Rep. Eliot Engel, D-N.Y., said the US and its NATO partners should consider expelling Turkey from the alliance. 'How do you have a NATO ally who's in cahoots with the Russians, when the Russians are the adversaries of NATO?'

'In the last 24 hours, we learned that they (the Turks) likely intend to expand their attack further south than originally planned — and to the west,' he said.

The US also has come to believe that the Kurds are attempting to 'cut a deal' with the Syrian army and Russia to counter the invading Turks, he said. As a result, Trump 'directed that we begin a deliberate withdrawal of forces from northern Syria,' Esper said.

Trump, in a tweet on Sunday, said: 'Very smart not to be involved in the intense fighting along the Turkish Border, for a change. Those that mistakenly got us into the Middle East Wars are still pushing to fight. They have no idea what a bad decision they have made. Why are they not asking for a Declaration of War?'

Esper said he would not discuss a timeline for the US pullback, but said it would be done 'as safely and quickly as possible.'

The Pentagon had said before the operation began that the US military would not support it, and the US pulled about 30 special operations troops out of observation posts along the invasion route on the Syrian border to keep them out of harm's way. The Turkish offensive initially covered an area along the border about 125 kilometers (77 miles) wide and about 30 kilometers (19 miles) deep. Esper said it has since grown wider and deeper.

Esper said he was aware of reports of hundreds of IS prisoners escaping as a result of the Turkish invasion and of atrocities being committed against Syrian Kurds by members of a Turkish-supported Syrian Arab militia.

'It gets worse by the hour,' Esper said. 'These are all the exact things' that US officials warned Erdogan would likely happen by ignoring US urgings not to invade northern Syria.

Treasury secretary Steven Mnuchin held out the possibility of quick action to impose economic sanctions on Turkey, a move that Trump has repeatedly threatened if the Turks were to push too far into Syria.

'If we go to maximum pressure, which we have the right to do — at a moment's notice the President calls me up and tells me — we will do this,' Mnuchin said. 'We could shut down all US dollar transactions with the entire government of Turkey. ... That is something we may do, absolutely.'

Esper was interviewed on CBS' 'Face the Nation' and 'Fox News Sunday.' Mnuchin appeared on ABC's 'This Week' and Engel was on NBC's 'Meet the Press.'