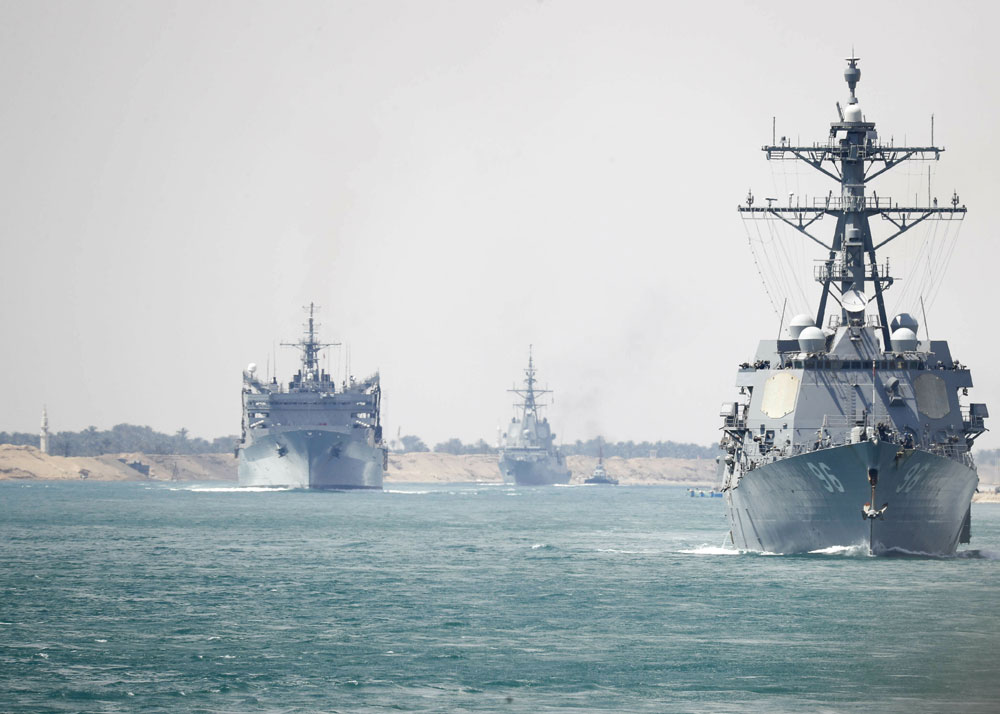 The Abraham Lincoln Carrier Strike Group transits the Suez Canal in Egypt. The aircraft carrier and its strike group are deploying to the Persian Gulf on orders from the White House to respond to an unspecified threat from Iran.
(AP file picture)
Edward Wong/ New York Times News Service   |   Washington   |   Published 15.05.19, 07:42 PM

US sending carrier to Mideast in warning to Iran

The state department ordered a partial evacuation of the US embassy in Baghdad on Wednesday, responding to what the Trump administration said was a threat linked to Iran, one that has led to an accelerated movement of American ships and bombers into the Persian Gulf.

The department ordered “non-emergency US government employees,” at both the embassy in Baghdad and the consulate in Erbil, to leave the country. The order applies primarily to full-time diplomats posted to Iraq by state department headquarters in Washington, and an embassy statement said that visa services in Iraq would be suspended as a result. Contractors who provide security, food and other such services will remain in place for now.

Secretary of state Mike Pompeo said last week that the administration had received intelligence related to “Iranian activity” that put American facilities and service personnel at “substantial risk”. Other American officials have said the same piece of intelligence points to potential attacks by Shia Arab militias tied to Iran against American troops in Iraq or Syria.

Iraqi officials have voiced scepticism about the threat described by the Americans, and on Tuesday, so did the British deputy commander of the American-led coalition fighting the Islamic State, or ISIS.

“No, there’s been no increased threat from Iranian-backed forces in Iraq and Syria,” Maj. Gen. Chris Ghika, speaking from Baghdad, told reporters at the Pentagon by video link. There are threats in the region to United States and coalition forces, he said, referring to “non-compliant actors” among the militias, but “there always have been”.

The Pentagon’s Central Command released a statement saying that Gen. Ghika’s comments “run counter to the identified credible threats available to intelligence from US and allies regarding Iranian backed forces in the region,” and that as a result, US forces in Iraq were “now at a high level of alert”.

Pompeo made a surprise visit to Baghdad on May 7 to brief Iraqi leaders about the threat.

On May 5, John Bolton, the national security adviser, issued a statement warning against any attack by the Iranian military or a “proxy” against American interests or allies. Bolton said the US was sending the USS Abraham Lincoln carrier strike group and bombers to the Persian Gulf.

Other officials later said that the strike group’s movement to that area had been previously scheduled and was merely being sped up.

On Friday, the Pentagon said it was sending another ship and a Patriot anti-missile battery to West Asia.

The order for a partial evacuation of the Baghdad embassy, which at the height of the Iraq War was the largest in the American diplomatic system, adds to the rising tensions between the US and Iran. It is unclear when the employees being evacuated will be told they can return.

In September, Pompeo ordered a full withdrawal from the American consulate in Basra, in southern Iraq, after a few rockets landed around the grounds of the city’s airport, where the consulate is.