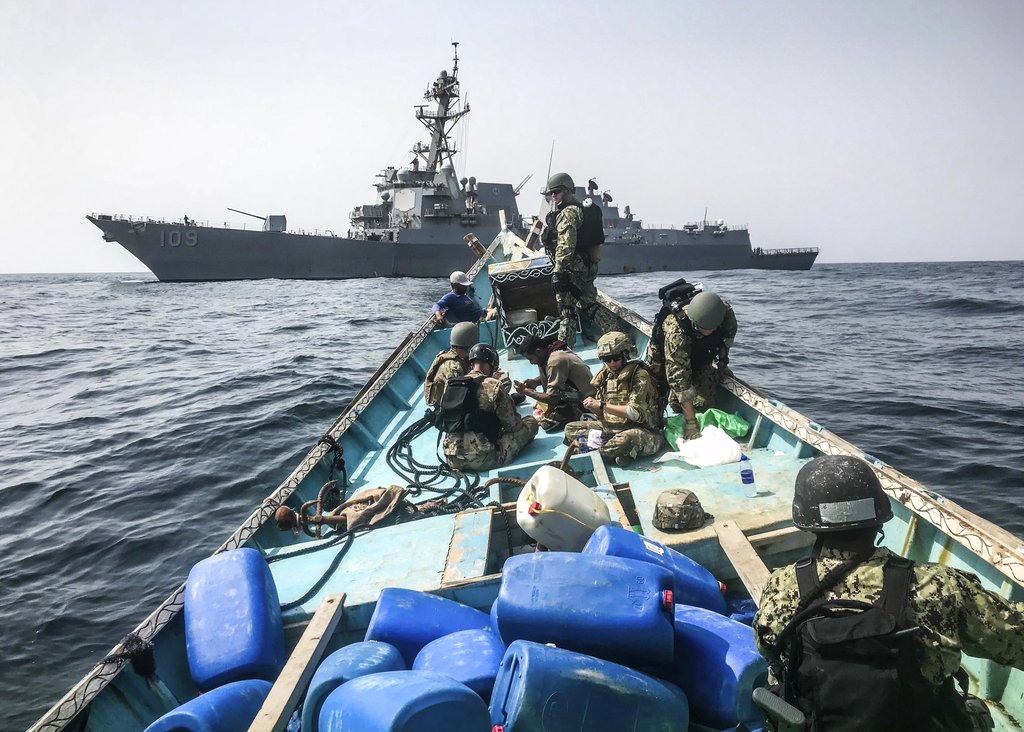 The US military said early on Friday that it has seized over 1,000 Kalashnikov assault rifles being smuggled by small ships in the Gulf of Aden amid the ongoing war in nearby Yemen.

The seizure by the guided-missile destroyer USS Jason Dunham may mark the first such interdiction of weapons at sea-bound for Yemen in years for American forces patrolling the region.

However, the military did not say whom they suspected of smuggling the weapons.

A short video released by the US Navy taken on Monday appeared to show a skiff and a dhow, a traditional ship that commonly sails the waters of the Persian Gulf region. As the vessels bob in the high waves, people on the dhow toss large boxes into the skiff.

The US Navy’s 5th Fleet, based in Bahrain, said sailors boarded the boats on Tuesday, uncovering the arms cache. Photos released by the navy showed what appeared to be new Kalashnikov rifles wrapped in plastic.

It said those aboard the vessels were handed over to Yemeni forces loyal to its exiled government in Saudi Arabia.

The US military did not offer a location for the seizure in the Gulf of Aden, which has Yemen to its north and Somalia to its south.

Smuggling of drugs, weapons and charcoal into and out of Somalia by criminal gangs and militant groups remains common.

The 5th Fleet repeatedly has accused Iran of smuggling arms via the sea to Yemen’s Shiite Houthi rebels, who have held Yemen’s capital, Sanaa, since September 2014. It points to seizures over a four-week period in early 2016, when coalition warships stopped three dhows in the Arabian Sea. The dhows carried thousands of Kalashnikov assault rifles as well as sniper rifles, machine guns, rocket-propelled grenade launchers, anti-tank missiles and other weapons.

One dhow carried 2,000 new assault rifles with serial numbers in sequential order, suggesting they came from a national stockpile, a report by the group Conflict Armament Research said. The rocket-propelled grenade launchers also bore hallmarks of being manufactured in Iran, the group said.

The US has supported a Saudi-led coalition fighting the Houthis since March 2015.