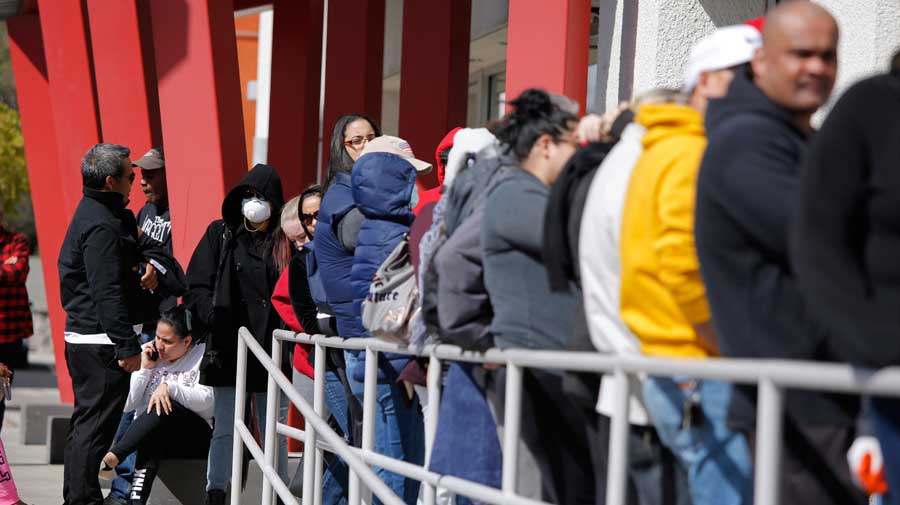 The US economy suffered its biggest blow since the Great Depression in the second quarter as the Covid-19 pandemic shattered consumer and business spending, and a nascent recovery is under threat from a resurgence in new cases of coronavirus.

The bulk of the historic contraction in activity reported by the commerce department on Thursday occurred in April when activity almost ground to an abrupt halt after restaurants, bars and factories among others were shuttered in mid-March to slow the spread of coronavirus.

More than five years of growth have been wiped out. With the recovery faltering, pressure is mounting for the White House and Congress to agree on a second stimulus package. President Donald Trump, who is trailing Democratic challenger and former Vice-President Joe Biden in opinion polls, said on Wednesday he was in no hurry. Trump on Thursday raised the possibility of delaying the November 3 presidential election.

“This is hard to swallow,” said Jason Reed, finance professor at the University of Notre Dame’s Mendoza College of Business. “Right now, the American economy is speeding towards a fiscal cliff. Not only do we need Americans to take serious action preventing the spread of the disease, but we also need Congress to agree on another stimulus package and quickly.”

Gross domestic product collapsed at a 32.9 per cent annualised rate last quarter, the deepest decline in output since the government started keeping records in 1947. The drop in GDP was more than triple the previous all-time decline of 10 per cent in the second quarter of 1958. The economy contracted at a 5.0 per cent pace in the first quarter. It fell into recession in February.

Economists polled by Reuters had forecast GDP slumping at a 34.1 per cent rate in the April-June quarter.

On a year-on-year basis GDP fell a record 9.5 per cent last quarter. Output shrank 10.6 per cent in the first half. The level of GDP has dropped to levels last seen in the last quarter of 2014.

Though activity picked up starting in May, momentum has slowed amid the explosion of Covid-19 infections, especially in the densely populated South and West regions where authorities in hard-hit areas are closing businesses again and pausing reopenings. That has tempered hopes of a sharp rebound in growth in the third quarter.

Federal Reserve chair Jerome Powell on Wednesday acknowledged the slowdown in activity. The US central bank kept interest rates near zero and pledged to continue pumping money into the economy.

Stocks on Wall Street fell on the GDP report and Trump’s tweet on possibly delaying the November vote. The dollar dipped against a basket of currencies. US Treasury prices rose.

Economists say without the historic fiscal package of nearly $3 trillion, the economic contraction would have been deeper. The package offered companies help paying wages and gave millions of unemployed Americans a weekly $600 supplement, which expires on Saturday. Many companies have exhausted their loans.

This, together with the sky-rocketing coronavirus infections is keeping layoffs elevated. In a separate report on Thursday, the labour department said initial claims for unemployment benefits increased 12,000 to a seasonally adjusted 1.434 million in the week ending July 25. A staggering 30.2 million Americans were receiving unemployment cheques in the week ending July 11.

“Tens of millions of workers have lost their jobs over the past few months and remain unemployed, and the pace of improvement in the labour market has slowed,” said Gus Faucher, chief economist at PNC Financial in Pittsburgh.

“These $600 payments are adding about $75 billion per month to household income, at a time when income from work has plummeted. The loss of huge amounts of unemployment income in the near term would be a significant drag on consumer spending.”

There have been claims, mostly from Republicans, that the generous jobless benefits are discouraging some of the unemployed from looking for work. The GDP report showed income at the disposal of households surged $1.53 trillion in the second quarter compared to an increase of $157.8 billion in the January-March period.

A significant portion of the income was stashed away, boosting savings to $4.69 trillion from $1.59 trillion in the first quarter.

Consumer spending, which accounts for more than two-thirds of the US economy, plunged at a 34.6 per cent pace last quarter.