We had zero catastrophic failures on the ship, zero situations where we had flooding or anything, and zero fires: Captain 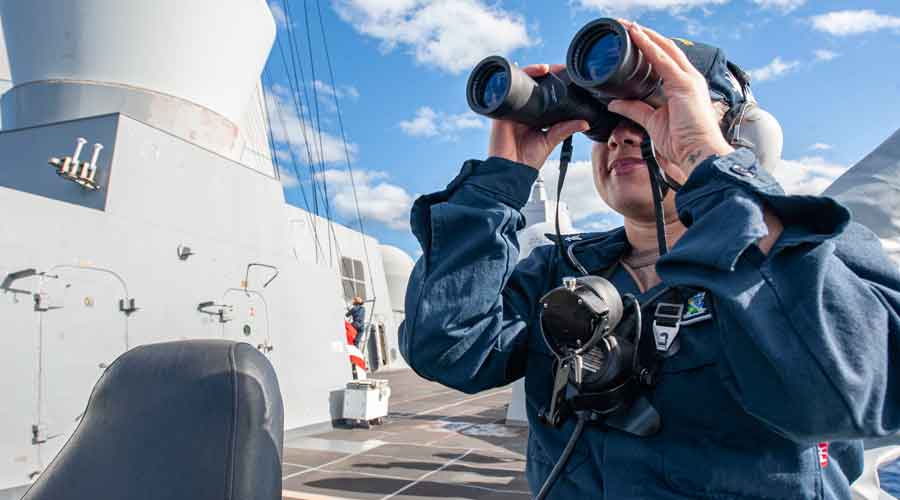 The US' newest and most advanced nuclear carrier's third and final full ship shock trial was completed on Sunday off the coast of Florida.
Twitter/@USNavy
Our Bureau And Agencies   |   Beijing   |   Published 12.08.21, 10:09 PM

The US Navy's aircraft carrier Gerald R Ford has successfully withstood an impact trial test of underwater detonation of 20 tonnes of explosives, which observers say could effectively reduce the threat posed by China's carrier killer missiles.

The US' newest and most advanced nuclear carrier's third and final full ship shock trial was completed on Sunday off the coast of Florida, following the previous such trials on June 18 and July 16, the American navy said in a press release on Monday.

Service officials described the shock trial testing where the Navy detonates 40,000 pounds of ordnance in the water near the hull to test both the ship and its systems as a success, with no major injuries, no fires and no flooding, the US Naval Institute's news portal USNI News reported.

We had zero catastrophic failures on the ship, zero situations where we had flooding or anything, and zero fires. All that is pretty significant, Capt. Paul Lanzilotta, Ford's commanding officer, told reporters on Monday.

It is a test perhaps most keenly watched by China as the Chinese military since 2015 has been flaunting its DF-21D and DF-26 missiles bandied as carrier killers which could hit the moving aircraft carriers from a distance of 5,000 kilometers.

In the trials, held off the Florida coast in the Atlantic Ocean, 40,000lbs (20 tonnes) of explosives equivalent to a 3.9-magnitude earthquake were detonated underwater, each time taking place closer to the carrier. Data on the impact on the vessel was collected.

"The tests demonstrated and proved to the crew, fairly dramatically that the ship will be able to withstand formidable shocks and continue to operate under extreme conditions, said Brian Metcalf, the manager of the navy's future aircraft carrier programme office.

Besides data collection, another reason to announce it was to send a message to China and Russia that the US aircraft carriers have super resilience and they are not worried about Chinese or Russian conventional anti-ship weapons, commentator and former Chinese military instructor Song Zhongping said.

The 40,000lbs explosive blast was much bigger than any single warhead of a conventional missile or torpedo, Song told the Hong Kong-based South China Morning Post.

The trial proved the Ford-class aircraft carriers could withstand some water mines or nearby missile strikes, but did not show their resistance against a direct hit, he said.

Ballistic missiles or hypersonic missiles could also carry electromagnetic pulse weapons that are detonated at high altitude and cause damage to the aircraft carrier, or even take it completely out of combat, he said.

Shock trials are designed to check a ship's shock durability and ability to sustain operations in a simulated combat environment.

The minor damage to the USS Gerald R Ford will be assessed and repaired during planned maintenance before its scheduled deployment next year, the Post report said.

Full ship shock trials were last conducted in 2016 on two littoral combat ships. The last aircraft carrier to undergo such a test was the USS Theodore Roosevelt, in 1987.

The DF-26, according to military officials, can conduct precision nuclear or conventional strikes against ground and naval targets.

As the Cold War with China in recent years is deepening especially with the US wading into the disputed South China Sea effectively challenging China's claims of sovereignty, the US Navy has been stressing that maintaining its supremacy in the face of competition from the Chinese navy's shipbuilding spree.

A US government document in June outlined plans to maintain a fleet of between 321 and 372 manned ships.

As of 2020, the Chinese navy had 360 ships and the US Navy 297. However, the US had more large ships, with 11 aircraft carriers to China's two, and 92 cruisers and destroyers against PLA's 33, as well as being more powerful in armament, according to the Post report.

The shock trial is expected to provide highly valuable data for mass production of Ford-class aircraft carriers the US' first major aircraft carrier investment since the 1960s.

China has developed anti-ship ballistic missiles the aircraft carrier killer DF-21D and DF-26 that reportedly simultaneously hit moving thousands of kilometres away in the South China Sea in a test last August, the report said.

Russia is also testing a hypersonic anti-ship cruise missile, the Zircon, which could reach a maximum speed of Mach 9. It hit a ground target in a test last month.