Trump said the time had come for the US to take the step, which Netanyahu warmly welcomed as a 'miracle' 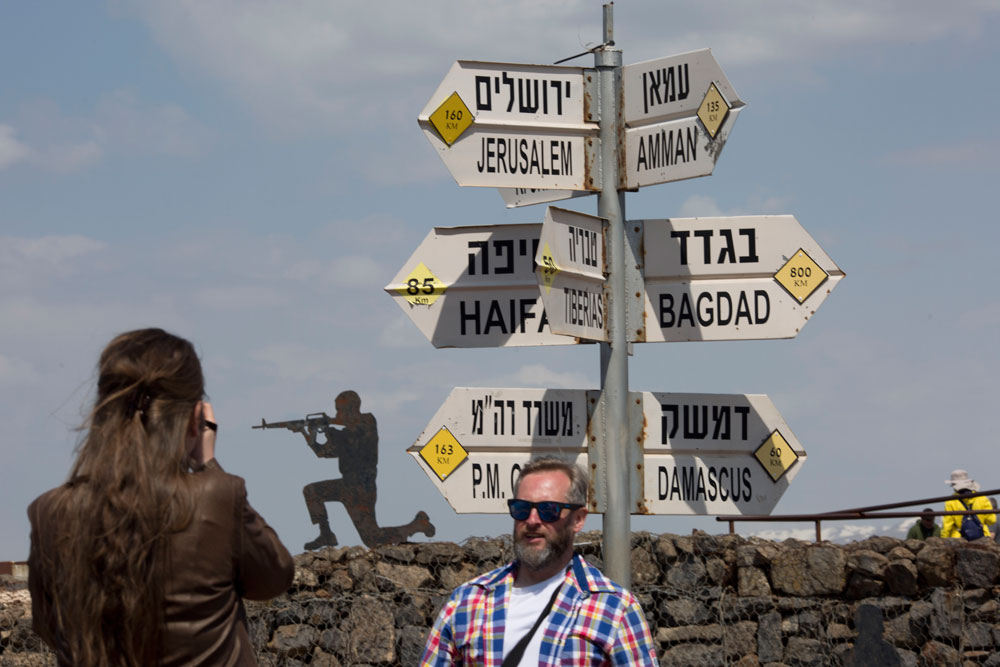 Tourists pose for photograph next to a mock road sign for Damascus, the capital of Syria, and other capitals and cities and a cutout of a soldier at Golan Heights near the border with Syria on Friday
Picture by AP
Matthew Lee And Deb Riechmann/AP   |   Jerusalem   |   Published 22.03.19, 07:04 PM

President Donald Trump abruptly declared on Thursday that the US will recognise Israel’s sovereignty over the disputed Golan Heights, a major shift in American policy that gives Israeli Prime Minister Benjamin Netanyahu a political boost a month before what is expected to be a close election.

The administration has been considering recognizing Israel’s sovereignty over the strategic highlands, which Israel captured from Syria in 1967, for some time and Netanyahu had pressed the matter with visiting Secretary of State Mike Pompeo just a day earlier.

US and Israeli officials said on Wednesday that they had not expected a decision until next week, when Netanyahu is to visit the US.

But in a tweet that appeared to catch many by surprise, Trump said the time had come for the US to take the step, which Netanyahu warmly welcomed as a “miracle” on the Jewish holiday of Purim.

“After 52 years it is time for the United States to fully recognize Israel’s Sovereignty over the Golan Heights, which is of critical strategic and security importance to the State of Israel and Regional Stability!” Trump tweeted.

The US will be the first country to recognize Israeli sovereignty over the Golan, which the rest of the international community regards as disputed territory occupied by Israel whose status should be determined by negotiations between Israel and Syria. Attempts to bring Israel and Syria to the table have failed. It was not immediately clear how a UN peacekeeping force in the Golan might be affected by the US move. That force’s mandate expires at the end of June.

There had been signals a decision was coming. Last week, in its annual human rights report, the State Department dropped the phrase “Israeli-occupied” from the Golan Heights section, instead calling it “Israeli-controlled”.

Pompeo had brushed questions about the change aside, insisting even earlier on Thursday that there was no change in policy. However, in comments to reporters ahead of a Purim dinner with Netanyahu and his wife at their Jerusalem home, Pompeo hailed the shift.

“Tonight, President Trump made the decision to recognize that that hard-fought real estate, that important place, is proper to be a sovereign part of the state of Israel,” he said.

Netanyahu, who is embroiled in a fierce re-election campaign ahead of April 9 voting, smiled broadly while delivering his own remarks.

“We have the miracle of Purim,” he said. “Thank you President Trump.”

Netanyahu has for weeks been stepping up longstanding Israeli requests for the US and others to recognise Israel’s sovereignty over the Golan. He has bolstered Israel’s traditional argument that the area has for all practical purposes been fully integrated into Israel by accusing Iran of trying to infiltrate terrorists from Syria into the plateau.

“At a time when Iran seeks to use Syria as a platform to destroy Israel, President Trump boldly recognizes Israeli sovereignty over the Golan Heights,” Netanyahu tweeted.

Trump’s announcement came as Pompeo was wrapping up a two-day visit to Jerusalem during which he lauded warm ties with Israel, met with Netanyahu on at least three separate occasions and promised to step up pressure on Iran.

Pompeo’s events with Netanyahu included a visit to the Western Wall that made him the highest-ranking US official to visit the Jewish holy site with any Israeli leader and appeared to further signal the Trump administration’s support for Israel’s control of the contested city. Trump has recognised Jerusalem as Israel’s capital and moved the US Embassy there from Tel Aviv, prompting the Palestinians to sever ties with the administration.

Pompeo’s presence also appeared to signal Trump’s support for Netanyahu the political candidate. Netanyahu, facing a tough challenge from a popular former military chief and reeling from a series of corruption allegations, has repeatedly sought to focus attention on his foreign policy record and strong ties with Trump.

“The Trump administration is absolutely endorsing Netanyahu,” said Alon Pinkas, former consul general of Israel in New York. “It’s very rare for a secretary of state to come visit an Israeli prime minister without any apparent diplomatic reason justifying it, without a peace process, without any regional agenda.”

Pompeo said his trip had nothing to do with politics or US policy on Jerusalem, although for decades American officials refrained from visiting the Western Wall with Israeli leaders to avoid the appearance of recognising Israeli sovereignty over the city’s most sensitive holy sites. Israel captured east Jerusalem and the Old City in the 1967 war. The Palestinians seek east Jerusalem as the capital of a future state.

“I’m going to stay far away from the decisions that the Israeli people will make here in a few weeks,” Pompeo told reporters. “It wouldn't be appropriate for the US secretary of state to comment on Israeli domestic politics.”

The Old City is home to the Western Wall and the Church of the Holy Sepulcher, where tradition says Jesus was entombed and resurrected. Pompeo, a Christian, also stopped at the church.

Next to the Western Wall is a hilltop compound revered by Jews as the Temple Mount and by Muslims as the Noble Sanctuary. The spot, which once housed the biblical Jewish Temples, is the holiest site in Judaism and today is home to the Al-Aqsa Mosque, the third holiest site in Islam.

The competing claims to the site are a frequent source of tension and lie at the heart of the Israeli-Palestinian conflict.

When Trump recognised Jerusalem as Israel’s capital, he said it did not determine the city’s final borders. But the gesture was perceived as unfairly siding with Israel and prompted the Palestinians to cut contacts with US officials. The Palestinians have already rejected a planned peace initiative by the administration.

Nabil Abu Rudeineh, spokesman for Palestinian President Mahmoud Abbas, said Pompeo’s visit added additional obstacles to peace hopes. “While they are claiming to be trying to solve the conflict, such acts only make it more difficult to resolve,” he said.

While previous secretaries of state have traditionally met with the Palestinians when visiting the region, Pompeo has no such talks planned.