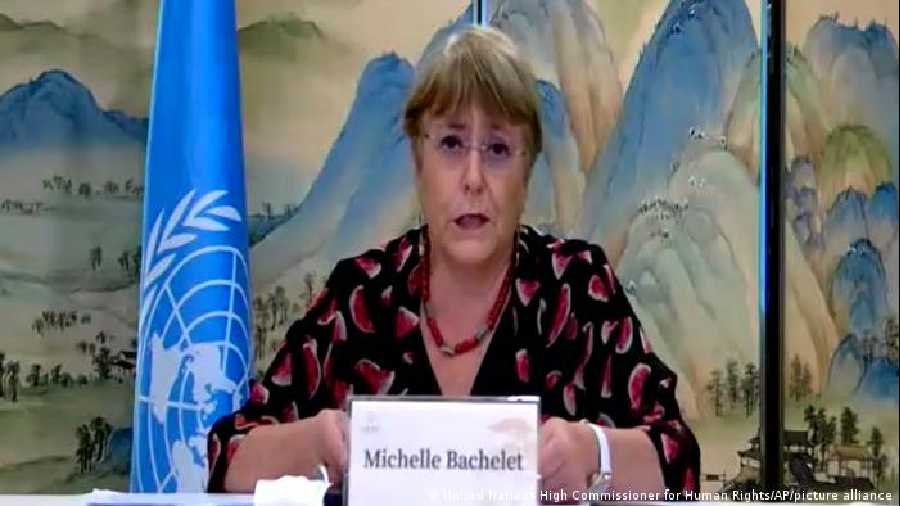 UN's Human Rights Chief Michelle Bachelet called on the Chinese authorities to avoid "arbitrary and indiscriminate" measures in the Uyghur-populated region of Xinjiang, addressing the public at the end of her six-day visit to China on Saturday.

Bachelet's tour included a visit to the area, where the US claims the central government is conducting a "genocide" against the Muslim group. During her visit, a leaked trove of documents underlined apparently brutal abuse against Uyghurs. China has dismissed the reports as "lies and rumors."

In Beijing, Bachelet said she met the provincial Communist party leader and local security chiefs during her visit to Xinjiang earlier in the week.

"I have raised questions and concerns about the application of counter-terrorism and deradicalization measures under broad application, particularly the impact on the rights of Uyghurs and other predominantly Muslim minorities," she said at an online press conference before leaving the country.

At the same time, she warned that her visit to China was "not an investigation."

Western 'plot' did not succeed, China saysBeijing praised the visit for its "positive concrete results" and said that unnamed "Western countries" were trying to disrupt and undercut the visit, but "their plot didn't succeed."

Previously, the US said they did not expect Bachelet would be given "the necessary access" to assess the situation in the region. But Bachelet said her meeting with UN-arranged sources was unsupervised.

"We are concerned the conditions Beijing authorities imposed on the visit did not enable a complete and independent assessment of the human rights environment in the PRC, including in Xinjiang, where genocide and crimes against humanity are ongoing," he said.

Blinken added he was "troubled by reports that residents of Xinjiang were warned not to complain or speak openly about conditions in the region, (and) that no insight was provided into the whereabouts of hundreds of missing Uyghurs and conditions for over a million individuals in detention."

Many activists, slammed Bachelet for her apparent hesitance to call out reported human rights abuses.

Amnesty International's Agnes Callamard said Bachelet's visit resulted in photo ops for Chinese officials and distorted statements in the media, "leaving an impression that she has walked straight into a highly predictable propaganda exercise for the Chinese government."

"Such quiet backroom conversation is just what Beijing wants — no public reporting, no pressure to end its intense repression of Uyghurs and others," Roth tweeted.

"Resignation is the only meaningful thing she can do for the Human Rights Council," Raxit said.