Pilots bring medical supplies from Germany to the Polish-Ukrainian border, and come back with refugees on board 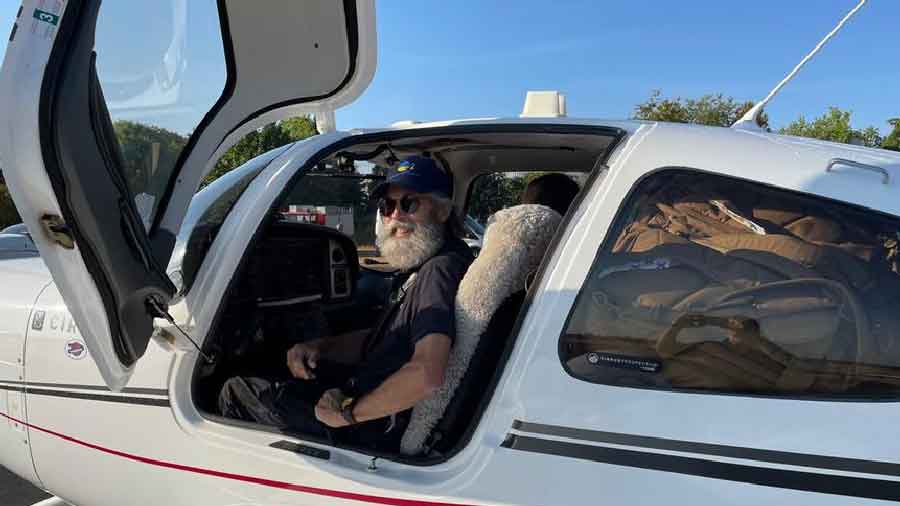 Loaded with medical supplies on the way to the Polish-Ukrainian border, loaded with refugees on the way back. More than 300 pilots from around the world have joined the private humanitarian mission "Ukraine Air Rescue."

John Bone could have continued to take it easy in his cottage in the seaside town of Apalachicola, and nobody would have blamed him. Enjoy the sun and one of the most beautiful beaches on the Gulf of Mexico, give a few flying lessons every now and then, and otherwise enjoy his well-deserved retirement.

But John Bone is no ordinary 71-year-old. The American has flown around the world in his beloved Cirrus SR22 twice already.

That's why, when he heard about the Ukraine Air Rescue initiative in faraway Germany, he knew what he had to do. After all, who better than him to fly relief supplies to Mielec, Poland, about 60 kilometers (37 miles) from the Ukrainian border.

"So, I got in my plane, first to Canada, then Greenland, from there to Iceland and Scotland. After five days I was in Germany and volunteered my services for two months, July and August."

Bone, a wiry man with a full beard, describes his journey to Germany as if it were child's play — probably because he has spent much of his life in the air. He has been flying since he was a teenager, and worked for Delta Air Lines as a pilot for 36 years — he could practically fly his usual route from Atlanta to Frankfurt in his sleep. On the tail of his aircraft are the flags of the 35 countries the globetrotter has visited so far.

"I think it's important to do everything you can with whatever resources are available to you to help Ukraine. In my case that's a plane, so I brought it with me," Bone said.

Bone has already flown hundreds of backpacks filled with first aid supplies into Poland and carried refugees to Germany on the way back. He has since become friends with some of them on Facebook and describes with a smile how he now has almost as many Ukrainian friends as friends from back home.

"Everyone that you bring to Germany is incredibly grateful. Today I will be flying back with a Ukrainian war hero who needs to go to hospital," he said. "It's an awesome experience when you feel that you are making a difference. And we are definitely making a difference."

That Bone can make a difference has a lot to do with Kay Wolf. The US pilot would still be teaching aviation enthusiasts in Apalachicola how to fly if the 52-year-old and his friend Stefan Sahling hadn't had a bold idea shortly after the Russian invasion of Ukraine.

"We philosophized about what we do best," Wolf said. "Processes, because we have 30 years experience working in manufacturing. Secondly, IT for organizing. And thirdly, flying. Stefan is a pilot and I have been flying with him for 15 years. We thought, if 5 to 10 from our circle of friends joined us, we could really make a difference."

Pilots from across the globe

That handful of people has now increased to 313 registered pilots, some of whom fly the missions at their own expense. Among them are former captains, engineers, and professional soldiers — and of course, retirees like Bone. They come from many countries including Kenya, Ecuador, and Canada.

Ukraine Air Rescue has set off for Mielec 69 times so far, from Hangelar near Bonn, or Augsburg, or Mainz. They have carried more than 17,000 kilos (37,500 pounds) of cargo, including cancer medication, first-aid kits, and dialysis machines that needed to be rushed to Ukraine. The supplies mostly come from the depot of the Cologne-based relief organization Blau-Gelbes Kreuz, which translates as Blue-Yellow Cross, named for the colors of the Ukrainian flag.

"Recently, we got a call on a Saturday morning that a specific and rare medication was needed on the Ukraine-Moldova border because an injured Ukrainian had developed antibiotic resistance. We organized a flight from Dublin — and the patient received his first infusion that evening," Wolf recalled.

Ukraine Air Rescue also provided aid to Bucha, the town which became infamous worldwide for the atrocities committed by Russian soldiers. Working with the Criminal Investigation Department of the Cologne police and the Blue-Yellow Cross, dozens of rape kits, used for gathering and preserving evidence of sexual assault, were brought to the airport in Mainz. Also being transported: the morning-after pill and 200 kilos of body bags.

The organization has brought 57 people to safety, so far. Ukraine Air Rescue focuses on the vulnerable — the injured who need surgery, wheelchair users, or unaccompanied children. It functions only thanks to Wolf and his team, who continually work in the background to hold the many threads of the operation together.

When will the mission end? Wolf, who has visited Ukraine often and has many friends there, says: "Whenever the donations run out. Or we fall over. Or best of all, the war is over."