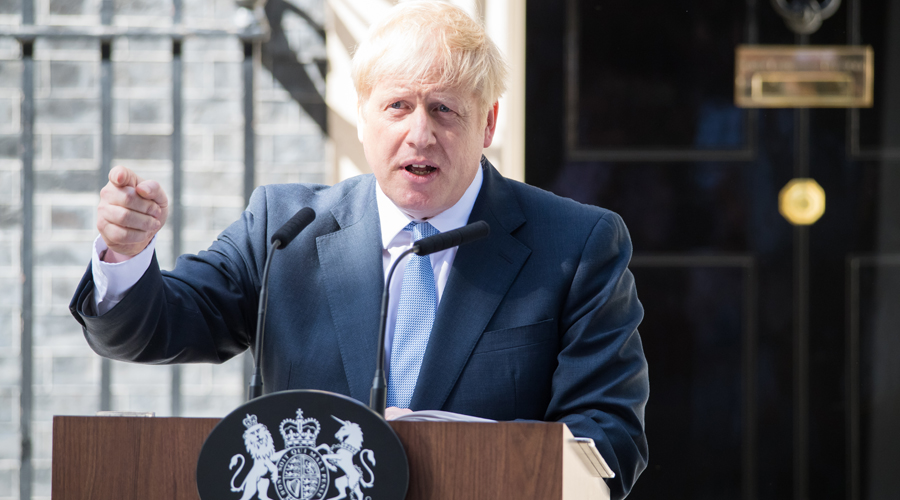 A furious row has erupted in Britain over Conservative government plans to transport illegal asylum seekers to the central African nation of Rwanda, thousands of miles away . Critics have branded the scheme "inhumane and unworkable".

Details emerging about the scheme piloted by Britain’s hardline Home Secretary Priti Patel, whose own parents fled Uganda in the late 1960s ahead of Idi Amin’s eviction of their fellow Gujaratis, make it clear that from the moment they are flown out of the UK, the fate of the migrants and asylum-seekers will be decided in Rwanda, according to Rwandan asylum laws and by the Rwandan government.which social campaigners say has one of Africa's worst human rights records.

Even the migrants who win asylum will only receive the right to live for a minimum five years in Rwanda which is one of the poorest countries in Africa. The migrants will have no right to return to Britain under the scheme under which the British government will pay Rwanda an initial sum of POUNDS STERLING 120 million.

Legal experts say the UK-Rwanda agreement that the government is billing as a “world first” is unworkable. They note that Denmark concluded a similar migration agreement with Rwanda but so far no migrants have been sent to the country. In 2018, Israel dispatched unwanted migrants to Rwanda and Uganda but Israeli public opposition scuttled the scheme.

Leading British immigration lawyer Maria Vaz said: “I've never seen anything like this. They've actually said we’re taking this step but you are not going to be able to challenge it. They are asserting that it is above the law.". She added, “We’re basically exporting migrants.”

Prime Minister Boris Johnson described the deal as "uncapped" and said Rwanda "will have the capacity to resettle tens of thousands of people in the years ahead".

Critics have charged that the agreement’s timing marks Johnson's latest attempt to win back voter support ahead of crucial local elections in early May to look as if the government is cracking down on unauthorised migrants.

There have been widespread Opposition demands for Johnson to resign after police announced he was being fined for having attended parties at 10 Downing Street in defiance of strict Covid-19 lockdown laws when families were saying goodbye to dying loved ones by Zoom because of pandemic rules to stem infections.

Johnson is the first prime minister to be found guilty of a criminal charge, according to Opposition critics, He has already been served with one fine for attending a birthday party in his honour and police say more fines will be levied on the prime minister.

Prominent Conservative Rory Stewart and a Johnson critic said the government's plan to offshore asylum seekers to Rwanda has been “designed to land on the front pages of newspapers to distract people” from the prime minister’s troubles.

Britain’s Home Secretary Priti Patel, who's has piloted the scheme, stoutly defended the agreement, described as a "memorandum of understanding,’" that she signed Thursday in the Rwandan capital Kigali with the country's government led by President Paul Kagame, a notoriously thin-skinned politician whose treatment of critics has generated widespread international criticism. Even Britain last year criticised Rwanda's repressive human rights record.

Critics who've fled the country have been killed by Rwandan agents, according to human rights activists. In the case of Paul Rusesabagina, the hotel manager who saved the lives of more than 1,000 people during the 1994 genocide that swept the country, he was kidnapped in Dubai -- he had become a Belgian citizen and was travelling through the country. He was taken to Rwanda, put on trial and sentenced to 25 years in jail for backing a rebel group. Hollywood made a movie, Hotel Rwanda, about Rusebaga's heroic efforts to protect people during the genocide

Steve Valdez-Symonds, a director at Amnesty International UK, warned that "sending people to another country – let alone one with such a dismal human rights record – for ‘processing’ is the very height of irresponsibility”.

Patel insisted that asylum seekers will be able to "settle and thrive" in the central African nation which ranks among the world's poorest countries and is the single most densely populated nation in Africa. The landlocked country also happens to be staggering under the burden of looking after 130,000 refugees,who are mainly from Democratic Republic of Congo next door.

Previously, Patel has floated the idea of sending asylum seekers to far-flung destinations including the remote South Atlantic territory of Ascension Island, which is classed as a British Overseas Territory.

The MoU published late Thursday declares that the Rwandans will decide on the claims in accordance with the terms of their own laws. In addition, people being recognised as refugees will be settled in Rwanda.

In its own words, the MoU says the agreement aims to create, “a bilateral asylum partnership in which Rwanda commits to receive asylum seekers from the United Kingdom, to consider their claims for asylum, giving effect to their rights under international law through the Rwanda domestic asylum system and arranging for the settlement in Rwanda of those recognised as refugees or otherwise requiring protection.”

Said Vaz: “We’re basically treating human beings like chattels by sending them off.”

Former UK international development secretary Andrew Mitchell said with the upfront POUNDS STERLING 120 million cost of the programme and more payments expected to be made "it would be cheaper to put them up at the Ritz" luxury hotel in London.

But Johnson said that the asylum system is costing the UK POUNDS 1.5 billion a year. Some 28,526 people were caught last year crossing the channel in tiny boats that often capsize, leading to many deaths. That number of migrants was an increase from the 8,404 tally the previous year who are known to have crossed the Channel in small boats. Johnson said he believes the agreement with Rwanda will act as a considerable deterrent to migrants seeking to take up their abode in the UK and save countless lives..

Vaz reckons the agreement will certainly be challenged in the European Court of Justice. Even though Britain has left the European union it is still subject to the jurisdiction of the ECJ.

Human rights organisations have launched a barrage of criticism against the agreement which attempts to sidestep the courts by saying that the migrants dealt with under its provisions will have no right to challenge any decisions made about them either in the Rwandan or British courts. It also attempts to block human rights and other organisations from challenging any decision.

The UK government hopes to put in place a system of initial screening in the country which will decide which migrants appear to qualify for asylum status. It's not clear how long this might take.

Those who do not appear to have a valid asylum claim will be put on a plane for Rwanda where their fate will be decided by the Rwandan government. The distance from Linton airbase in the UK to Kigali is about 4,200 miles.

However the government is aware it will face a welter of lawsuits attempting to make the MoU stillborn. It has attempted to forestall this by asserting that the MoU cannot be challenged in any court.

"The commitments set out in this Memorandum...... do not create or confer any right on any individual, nor shall compliance with this Arrangement be justiciable in any court of law by third-parties or individuals," the MoU  says.

The African Union hasn't commented yet on Britain's move but it lambasted Denmark's attempt to dump its migrants in Rwanda. "Such attempts to stem out migration from Africa to Europe is xenophobic and completely unacceptable."

Tourists visiting Rwanda are impressed by its stunning scenery but they say discussing anything political with citizens can land them in big trouble.