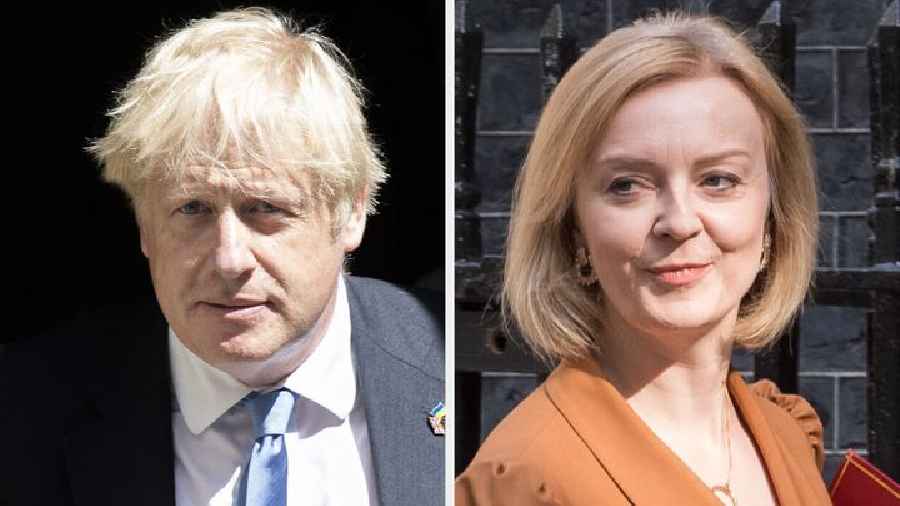 The YouGov survey for Sky News' suggests 66 per cent of members are in favour of voting for Truss and 34 per cent back the British Indian ex-minister, once those Tory members who do not know or will not vote are excluded.

The poll makes clear that the incumbent Prime Minister is still held in high affection among Tory members and any successor could be unfavourably compared to him by Tory members, Sky News said in its poll analysis.

If Johnson was still in the contest alongside Sunak and Truss, 46 per cent say they would vote for the incumbent and only 24 per cent for Truss and 23 per cent for Sunak.

Similarly, 44 per cent say that Johnson would make the best Prime Minister, 24 per cent favouring Truss and 23 per cent for Sunak.

Almost double the number of Tory members feel Johnson is the one who could beat Opposition Labour Leader Keir Starmer in a general election.

The latest survey, covering 1,089 Conservative Party members who hold a vote in the leadership election, was conducted between August 12 and 17.

It comes on the back of a separate Conservative Home survey on Wednesday, which also gave Truss a 32-point lead in the race.

The YouGov survey shows the contest has tightened only very slightly since its last similar poll of members over two weeks ago, when Truss had a 38-point lead, indicating that the debates and hustings are not injecting much-needed momentum for the Sunak camp.

Only 13 per cent of voters say they have not yet decided how they will vote or will not be voting, which would not be enough to give him a last-minute swing in the online and postal ballot closing on September 2.

Among those who have already voted, 68 per cent say they voted for Truss and 31 per cent for Sunak.

However, it is not smooth sailing for Truss with the poll also showing that 40 per cent of Tory members believe her victory would result in a hung Parliament or a Labour majority.

Another challenging area for Truss if she enters government is evident in the poll over the issue of economic support to help with the cost-of-living crisis.

Meanwhile, the Institute for Fiscal Studies (IFS) think tank warned that large, permanent tax cuts could add to pressures on the public purse as the economic outlook deteriorates.

Sunak, 42, has said that he will only cut taxes "once we've gripped inflation" and warned that Truss' pledge to immediately slash taxes is unaffordable and won't help those on low incomes.

The IFS warns that both candidates' plans could prove unaffordable without spending cuts at a time when more public spending is needed for a struggling UK economy.

The two candidates will continue on the campaign trail to try and win over undecided voters, with the results set to be declared on September 5.