Opposition legislators demanded Johnson to apologize and resign, but he ignored the calls and accused the lawmakers of blocking Brexit 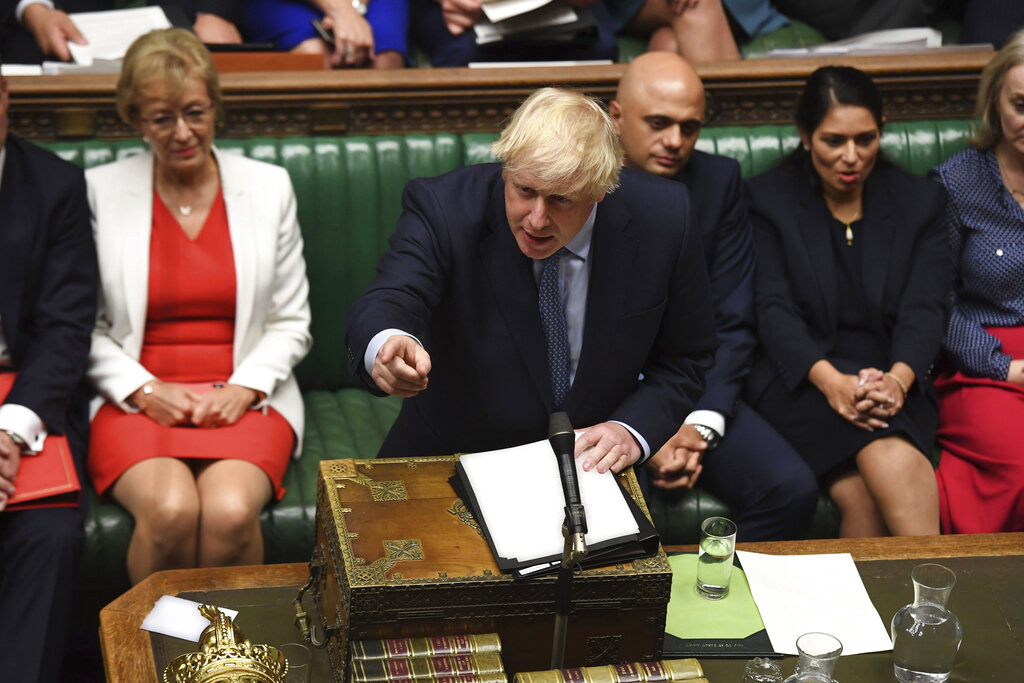 British Prime Minister Boris Johnson faced a backlash from furious lawmakers on Thursday over his use of charged and confrontational language in Parliament about opponents of his Brexit plan, as the speaker of the House of Commons warned that the country's political culture has turned 'toxic.'

In a raucous and bad-tempered debate on Wednesday, Johnson characterized an opposition law ordering a Brexit delay as a 'surrender act' and a 'humiliation bill,' said delaying Brexit would 'betray' voters and brushed off concerns that his language might endanger legislators as 'humbug.'

Johnson took power two months ago with a 'do or die' promise that Britain will leave the European Union on the scheduled date of October 31, with or without a divorce deal. He's pitting himself against lawmakers determined to avoid a no-deal exit, which economists say would disrupt trade with the EU and plunge the UK into recession.

Opponents accuse him of fomenting extremism with his people-versus-politicians rhetoric.

Some in Parliament warned Johnson to be more cautious given the 2016 killing of legislator Jo Cox. The Labour lawmaker was murdered a week before Britain's European Union membership referendum by a far-right attacker shouting 'death to traitors.'

Labour lawmaker Paula Sherriff brought up the death of Cox — and the death threats many legislators still face — and implored the Prime Minister to stop using 'pejorative' language.

There was uproar in the Commons after Johnson replied: 'I've never heard such humbug in all my life.'

Cabinet minister Nicky Morgan tweeted that 'we all need to remind ourselves of the effect of everything we say on those watching us.'

Johnson was criticized by members of several parties and by Cox's widower. Brendan Cox said he felt 'a bit sick' at the way her name was being used.

'The best way to honor Jo is for all of us (no matter our views) to stand up for what we believe in, passionately and with determination. But never to demonize the other side and always hold onto what we have in common,' he tweeted.

Wednesday's fiery session of Parliament came a day after Britain's Supreme Court unanimously ruled that Johnson's attempt to suspend Parliament for five weeks until October 14 had the effect of stymieing its scrutiny of the government over Brexit. The court declared the suspension void.

Emotions spilled over as opposition legislators demanded Johnson apologize and resign for breaking the law. But Johnson ignored calls to step down or say sorry, showing no sign of contrition and redoubling his attacks on lawmakers he accused of blocking Brexit.

'There was an atmosphere in the chamber worse than any I've known in my 22 years in the House,' Bercow said. 'The culture was toxic.'

Bercow implored the members of Parliament to 'treat each other as opponents, not as enemies.'

Johnson says he wants to strike an agreement with the bloc, but the EU says it is still waiting for useful proposals to come from Britain to unblock stalled negotiations.

EU Brexit negotiator Michel Barnier said on Thursday that he is 'still ready to work on any new legal and operational proposal' from Johnson, but indicated insufficient progress had been achieved in the past few weeks.

'We are still waiting,' he said.

The EU already had a deal with the UK on departure terms, but it was rejected in British Parliament. Johnson now wants to drastically renegotiate the agreement or leave without a deal on October 31.