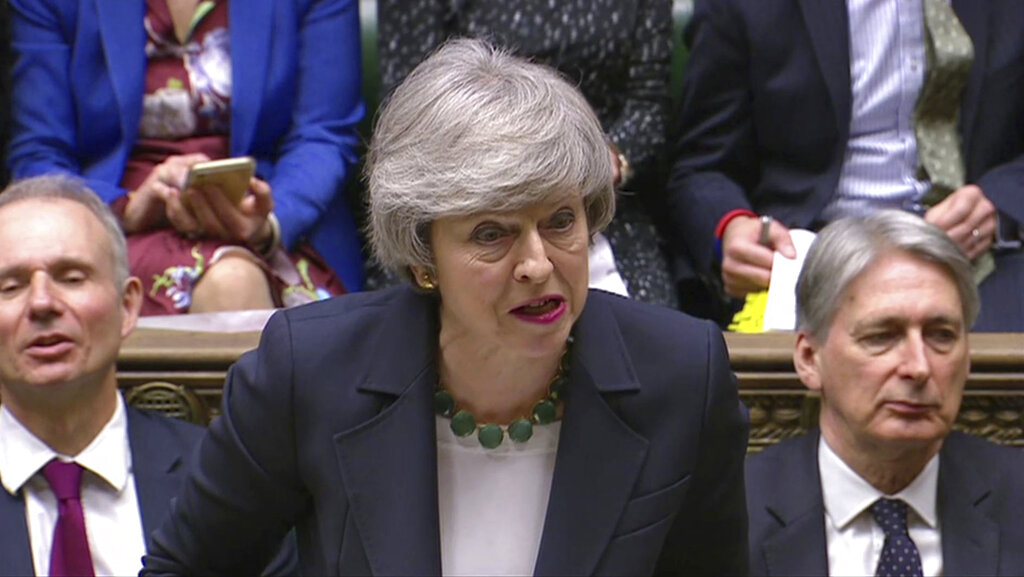 On the eve of more divisive votes in Parliament over Brexit, the British government on Wednesday downplayed a report that it plans to offer lawmakers a choice between backing Prime Minister Theresa May's unpopular divorce deal and a delay to the UK's exit from the European Union.

An ITV News correspondent, Angus Walker, said he overheard negotiator Olly Robbins in a Brussels bar saying the government would ask Parliament in late March to back her agreement, rejected by lawmakers last month, or seek an extension to the Brexit deadline.

May told lawmakers that Parliament had approved a two-year countdown to Brexit, and 'that ends on the 29th of March. We want to leave with a deal, and that's what we're working for.'

She told parliamentarians not to set much store in 'what someone said to someone else as overheard by someone else in a bar.'

Lawmakers overwhelmingly rejected May's Brexit deal with the EU last month, and she is now trying to secure changes before bringing it back for another vote.

The EU insists it won't renegotiate the legally binding withdrawal agreement, though it is still holding talks with Britain about potential tweaks to a non-binding political declaration that accompanies it.

German Chancellor Angela Merkel said Wednesday that the EU wanted to 'do everything for a deal, but it certainly it has to be a fair deal ... and there we unfortunately still have a bit of work ahead of us.'

If a deal is not approved by the British and European parliaments before March 29, the UK faces a messy sudden Brexit that could cause severe economic disruption.

Brexit Secretary Stephen Barclay said the government wants to secure a deal, but is also preparing for a 'no-deal' Brexit.

Opposition politicians have accused May of trying to fritter away time as the clock ticks down, in order to leave lawmakers with a last-minute choice between her deal and no deal.

Britain's Parliament on Thursday will hold the latest in a series of debates and votes, in which pro-EU lawmakers will try to change the government's course, ruling out a 'no-deal' Brexit and aiming for close post-Brexit ties with the EU.

The votes are not legally binding, and a House of Commons split between Brexit-backers and EU supporters has so far sent contradictory messages. In previous votes on Jan. 29, lawmakers voted to rule out a 'no-deal' exit — without signaling how that should happen — and also told May to seek changes to her Brexit agreement from the EU.

On Tuesday, May urged lawmakers to give her more time, promising Parliament yet another series of votes on the next steps in the Brexit process on Feb. 27 if she has not secured changes to the Brexit deal by then.

'What the prime minister is up to is obvious,' Labour Party Brexit spokesman Keir Starmer said Wednesday. She's coming to Parliament every other week, pretending there's progress and trying to buy another two weeks, edging her way toward March 21, when the next EU summit is, to try to put her deal up against no-deal in those final few weeks.

'Parliament needs to say 'That's not on.''