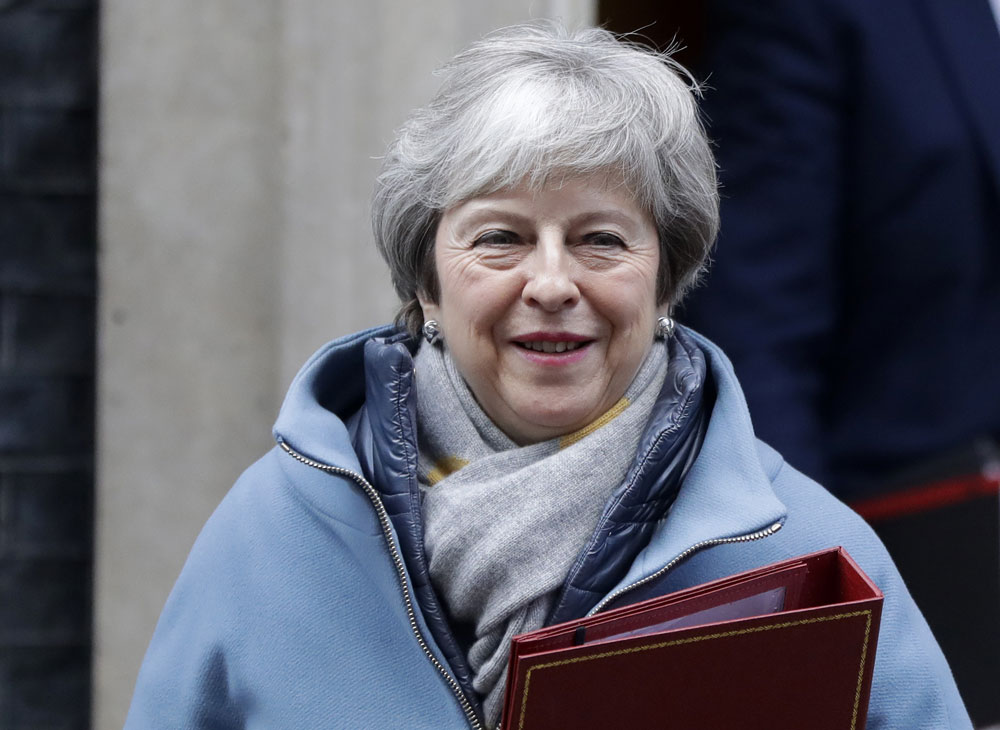 British Prime Minister Theresa May unveiled her Brexit Plan B on Monday.

May launched a mission to resuscitate her rejected European Union divorce deal, setting out plans to get it approved by Parliament after securing changes from the EU to a contentious Irish border measure.

Opposition leader Jeremy Corbyn of the Labour Party accused May of being in 'deep denial' about her doomed deal.

'This really does feel a bit like 'Groundhog Day,'' he said, referring to the 1993 film starring Bill Murray, in which a weatherman is fated to live out the same day over and over again.

Outlining what she plans to do after her EU divorce deal was rejected by Parliament last week, May said that she had heeded lawmakers' concerns over an insurance policy known as the 'backstop' that is intended to guarantee there are no customs checks along the border between EU member Ireland and the U.K.'s Northern Ireland after Brexit.

May told the House of Commons that she would be 'talking further this week to colleagues ... to consider how we might meet our obligations to the people of Northern Ireland and Ireland in a way that can command the greatest possible support in the House.

'And I will then take the conclusions of those discussions back to the EU.'

The bloc insists that it won't renegotiate the withdrawal agreement.

'She is wasting time calling for a revision or clarification over the backstop,' said German politician Udo Bullmann, head of the socialist group in the European Parliament.

While May stuck doggedly to her deal, she also acknowledged that control over Brexit wasn't entirely in her hands. She noted that lawmakers will be able to amend her plan when it comes to a vote in the House of Commons on Jan. 29, exactly two months before Britain is due to leave the EU.

Groups of 'soft Brexit'-backing lawmakers — who want to keep close economic ties to the bloc — are planning to use amendments to try to rule out a 'no-deal' Brexit and make May ease her insistence that leaving the EU means quitting its single market and customs union.

Britain and the EU sealed a divorce deal in November after months of tense negotiations. But the agreement has been rejected by both sides of Britain's divide over Europe. Brexit-backing lawmakers say it will leave the U.K. tethered to the bloc's rules and unable to forge an independent trade policy. Pro-Europeans argue it is inferior to the frictionless economic relationship Britain currently enjoys as an EU member.

After her deal was thrown out last week by a crushing 432-202 vote in Parliament, May said she would consult with lawmakers from all parties to find a new way forward.

But Corbyn called the cross-party meetings a 'stunt,' and other opposition leaders said the prime minister didn't seem to be listening.

On Monday, May rejected calls from pro-EU lawmakers to delay Britain's departure from the bloc or to hold a second referendum on whether to leave.

In a nod to opposition parties' concerns, she promised to consult lawmakers, trade unionists, business groups and civil society organizations 'to try to find the broadest possible consensus' on future ties between Britain and the EU, and said the government wouldn't water down protections for the environment and workers' rights after Brexit.

May also said the government had decided to waive a 65 pound ($84) fee for EU citizens in Britain who want to stay permanently after Brexit.

Guy Verhofstadt, the head of the EU Parliament Brexit steering group, welcomed news that the fee was being dropped for 3 million EU nationals, saying it had been a 'key demand' for the EU legislature.

May's immediate goal is to win over pro-Brexit Conservatives and her party's Northern Irish ally, the Democratic Unionist Party. Both groups say they won't back the deal unless the border backstop is removed.

The backstop proposes to keep the U.K. in a customs union with the EU in order to avoid checks on the Irish border. It is meant as a temporary measure that would last until a permanent solution is found. But pro-Brexit U.K. lawmakers fear Britain could become trapped in it, indefinitely bound by EU trade rules.

Polish Foreign Minister Jacek Czaputowicz broke ranks with EU colleagues Monday by suggesting the problem could be solved by setting a five-year time limit on the backstop.

The idea got a cool reception. Irish Foreign Minister Simon Coveney said that 'putting a time-limit on an insurance mechanism, which is what the backstop is, effectively means that it's not a backstop at all.'

Britain's political impasse over Brexit is fueling concerns that the country may crash out of the EU on March 29 with no agreement in place to cushion the shock. That could see tariffs imposed on goods moving between Britain and the EU, sparking logjams at ports and shortages of essential supplies.

Carolyn Fairbairn, director-general of the Confederation of British Industry, said Monday was 'another bleak day for business.'

'Parliament remains in deadlock while the slope to a cliff edge steepens,' she said.

Several groups of lawmakers are trying to use parliamentary rules and amendments to May's plan to block the possibility of Britain leaving the EU without a deal.

One of those legislators, Labour's Yvette Cooper, said May was shirking her responsibility to the country by refusing to take 'no deal' off the table.

'I think she knows that she should rule out 'no deal' in the national interest because it would be so damaging,' Cooper told the BBC. 'She's refusing to do so, and I think she's hoping that Parliament will do this for her. That is not leadership.'

Theresa May wins no-confidence vote, but is still beset by Brexit