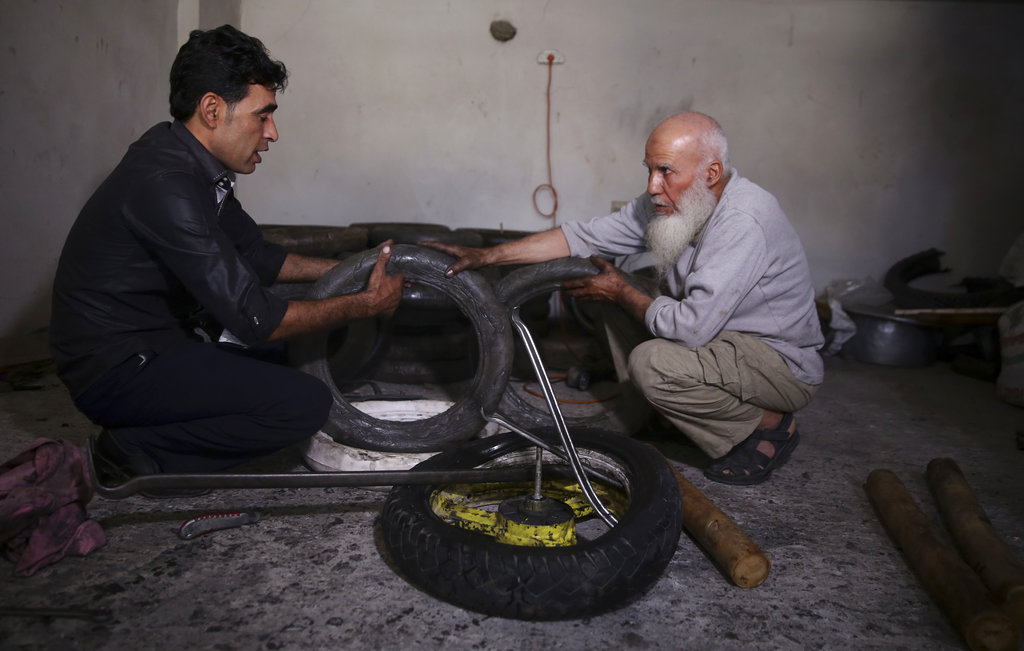 Palestinians in Gaza have coped with shortages of just about everything in more than a decade of border closures — from chocolate to medicines to fuel and building supplies. Now, six months of protests against an Israeli-Egyptian blockade have added an unexpected item to that list: car tyres.

Tyres are a favoured item by demonstrators during the weekly protests — they are set on fire, then tossed toward Israeli troops across the border.

In response, Israel has halted tyre imports into the strip, sending prices skyrocketing and forcing Gaza motorists to find creative solutions to keep their vehicles on the road.

Taxi driver Khaled Hamad has no spare tyre in his trunk. His tyres are worn down, but he could only afford to change two, replacing them with secondhand ones that aren’t even the standard size recommended by the manufacturer.

“Even when they were cheaper, upgrading my tyres was expensive,” Hamad said as he kicked a bald front tire that still needs to be changed. “I make 40 shekels ($11) a day these days. Business is down.”

Protesters at the border marches burn old tyres, using the thick black smoke to obscure the vision of Israeli snipers as they hurl rocks, firebombs and grenades toward Israeli forces on the other side of the fence diving Gaza and Israel. Flaming tyres are also rolled toward the fence. 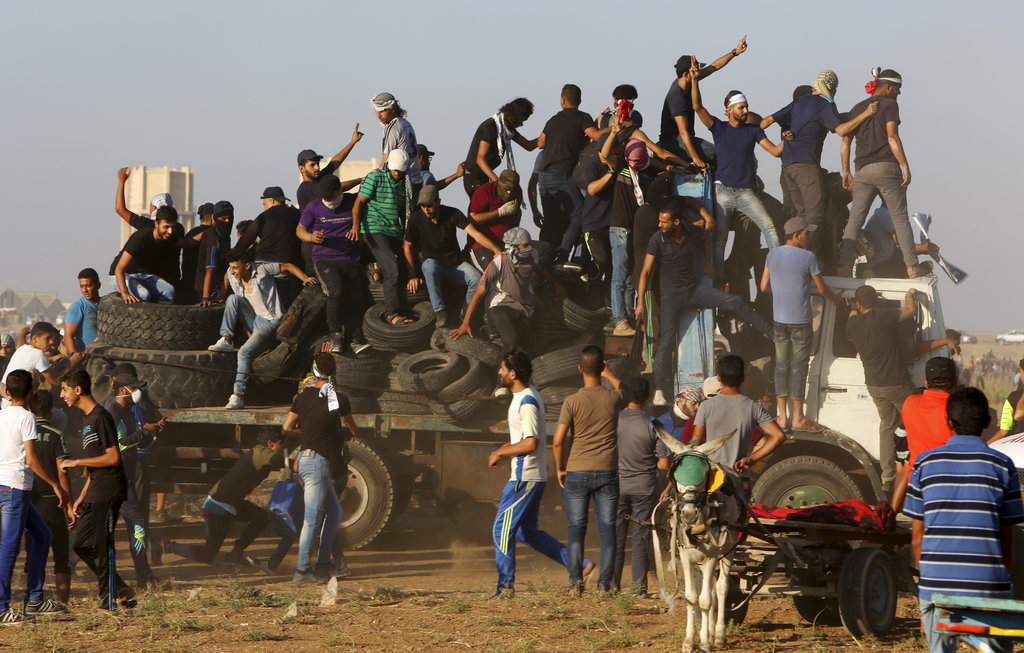 In this September 21, 2018, file photo, protesters arrive on a truck with tyres to burn near the the fence of the Gaza Strip border with Israel during a protest.
AP

Ironically, the tyre ban has had no effect on the protesters, who rely on a seemingly endless supply of old ones that are discarded in garages, fields and roadsides across the territory.

Rushdi al-Khour, head of the association of Gaza spare parts merchants, which coordinates imports from Israel, said the tire shortage has caused severe losses for businessmen.

He said the cost of a pair of tyres has jumped from $120 to $300 since the ban went into effect, a sizable sum in the economically struggling strip.

Fifteen distributors have lost up to $2 million so far, both in tyres they bought from Israeli companies and in storage fees for shipments stuck at Israeli ports, according to al-Khour.

“This is a wrong decision by the Israeli side,” he said of the ban. “Lift the siege and the protests will stop.”

The Hamas-led protests have been fueled by widespread despair over the difficult conditions created by the blockade. Unemployment is now over 50 per cent, and Gazans get just a few hours of electricity a day. 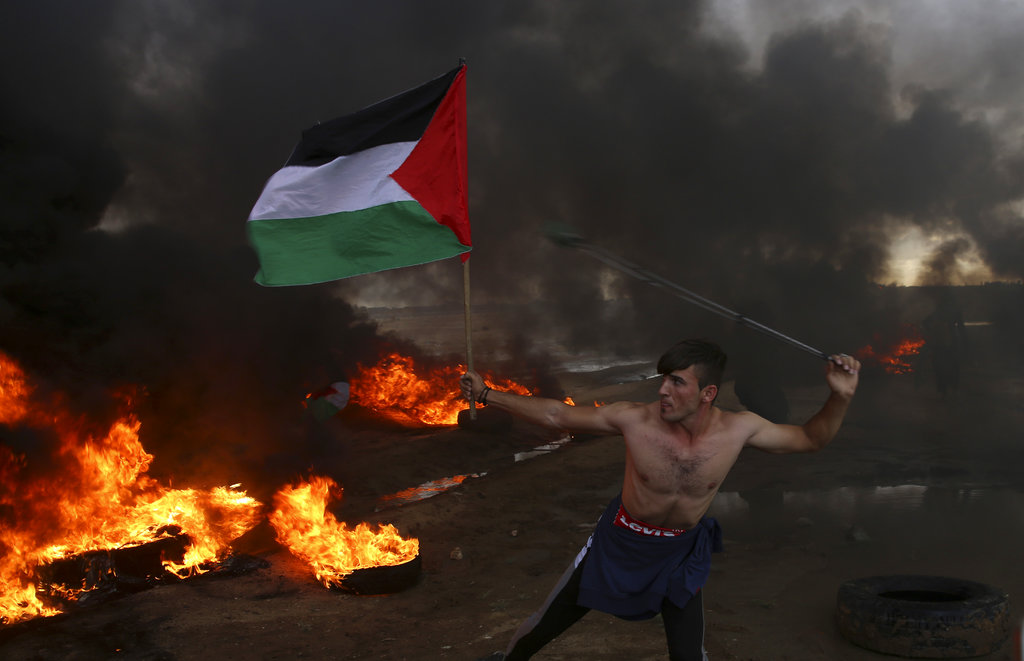 In this October 26, 2018, file photo, a protester hurls stones while holding the Palestinian flag amid burning tyres near the fence of the Gaza Strip border with Israel.
AP

Israel and Egypt imposed a blockade on Gaza after Hamas, a militant group that opposes Israel’s existence, took control of the territory in 2007. Israel says the blockade, which restricts the movement of people and goods in and out of Gaza, is necessary to isolate Hamas.

After coping with shortages of basic items for over a decade, Gazans have become adept at finding creative solutions.

In the attic of a small workshop in the Jabaliya refugee camp in northern Gaza Strip, Abdulla al-Radie invented a rubbery filling for old motor scooter tires that he says extend their lifespan.

He recently changed the name of his shop to “Airless Tyres Workshop” and began selling tyres he claims cannot be punctured. To demonstrate, he plunged a knife and nails into a tyre. He refused to say what the filling is made from, but said it involves five materials, including plastic and rubber.

At first, the fillings were produced in pipes, but they affected the balance of the wheels. He says he has improved his creation to make “round moulds that fit the shape of the tyre and sustain weight”.

About 50 tyres were stacked at his shop on a recent day, and he said he sold twice that amount in September. He is now opening a new branch in the southern town of Rafah, where many residents have motorbikes.

“Today we started with motorcycles,” he said. “I hope next we will make them for cars.”

Fadi Diab, who owns a tyre store and repair workshop, said he paid about $20,000 to store nine containers of tires stranded at an Israeli port.

“The prices have gone up and people don’t have money,” he said. “People come here when changing the tyres is their last option. They want to use the tyres as long as possible.”

Some businessmen managed to bring in three shipments of tyres from Egypt in October, Diab said. That brought some temporary relief, he said, but sales remain low.

Only three new tires were seen stacked on a shelf in his shop, while dozens of gleaming metal wheels adorned the wall.

“Only those who rely on their cars for income... replace their tyres these days,” Diab added.

Hamad, the taxi driver, said he’d change his tires only when prices come down. “I’m afraid these old tyres will keep flattening and affecting my work by delaying me from my customers.”