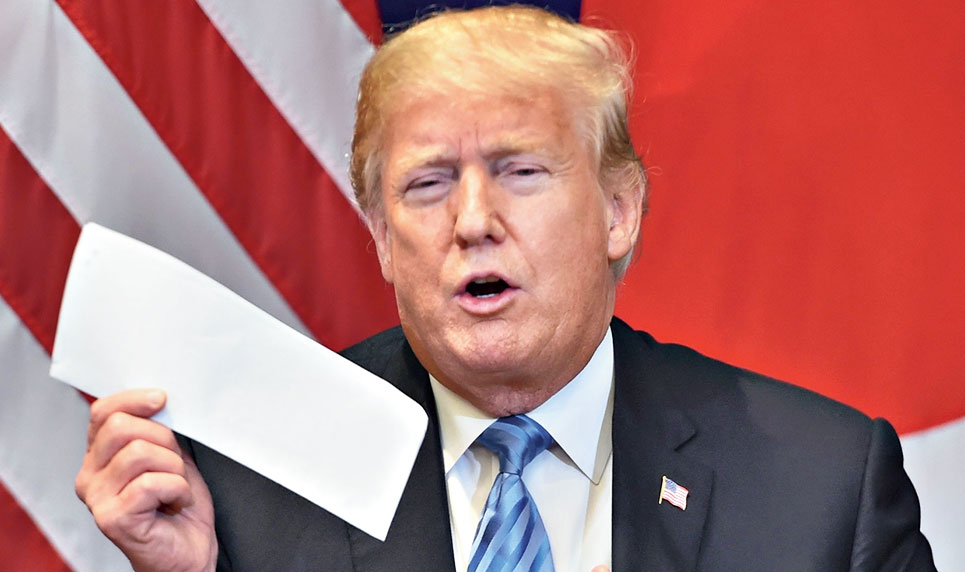 US President Donald Trump took his enthusiasm for his detente with North Korean leader Kim Jong Un to new heights on Saturday, declaring at a rally with supporters that “we fell in love” after exchanging letters.

Trump and Kim have said they want to work toward denuclearising the Korean peninsula, holding an unprecedented meeting earlier this year in Singapore to discuss the idea.

Before they turned the page on decades of public acrimony, the leaders regularly traded threats and insults as North Korea pushed to develop a nuclear missile capable of hitting the US.

“I was really being tough — and so was he. And we would go back and forth,” Trump told a rally in West Virginia. “And then we fell in love, okay? No, really — he wrote me beautiful letters, and they’re great letters,” he said.

His supporters laughed and applauded. Trump grumbled that commentators would cast him as “unpresidential” for describing Kim in such glowing terms.

The Trump administration is preparing for a second summit with Kim to talk about denuclearisation. The time and location have not yet been announced.

Despite the warmer tone to the relationship, North Korea has not complied with US demands to provide a complete inventory of its weapons programmes and take irreversible steps to give up its arsenal.

North Korea’s foreign minister said on Saturday that there was “no way we will denuclearise” without getting so-called trust-building concessions from the US.

“Without any trust in the United States, there will be no confidence in our national security, and under such circumstances there is no way we will unilaterally disarm ourselves first,” the North Korean minister, Ri Yong-ho, told the United Nations General Assembly.

Speaking to world leaders who had gathered for the General Assembly, Ri expressed a “firm determination to turn the Korean Peninsula into a land of peace” but said the American-backed sanctions were a “hostile policy”.

Ri also took aim at the UN Security Council, which has voted in favour of sanctions against North Korea since 2006 in an attempt to deter the country’s nuclear programme. He said the council was acting only in the interest of the US, a “very concerning stand”.