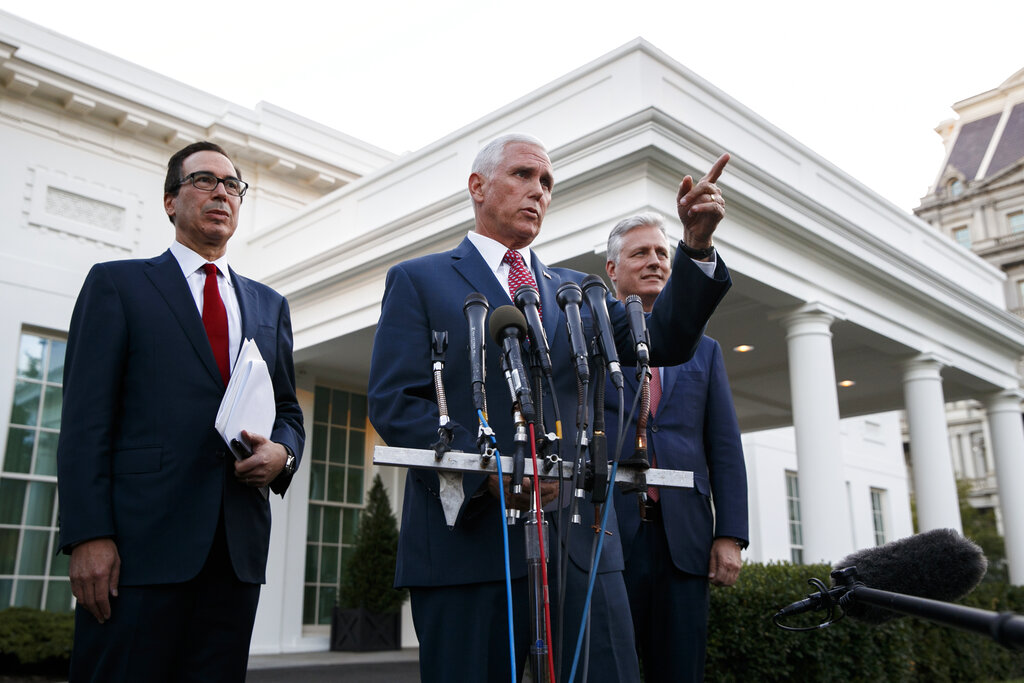 Targeting Turkey's economy, President Donald Trump announced sanctions aimed at restraining the Turks' assault against Kurdish fighters and civilians in Syria — an assault Ankara began after Trump announced he was moving US troops out of the way.

The United States on Monday also called on Turkey to stop the invasion and declare a cease-fire, and Trump is sending vice-president Mike Pence and national security adviser Robert O'Brien to Ankara as soon as possible in an attempt to begin negotiations. Pence said Trump spoke directly to Turkish leader Recep Tayyip Erdogan, who promised not to attack the border town of Kobani, which in 2015 had witnessed the Islamic State group's first defeat in a battle by US-backed Kurdish fighters.

'President Trump communicated to him very clearly that the United States of American wants Turkey to stop the invasion, implement an immediate cease-fire and to begin to negotiate with Kurdish forces in Syria to bring an end to the violence,' Pence said.

The Americans were scrambling for Syria's exits, a move criticized at home and abroad as opening the door to a resurgence of the Islamic State group, whose violent takeover of Syrian and Iraqi lands five years ago was the reason American forces came in the first place.

Trump said the approximately 1,000 US troops who had been partnering with local Kurdish fighters to battle IS in northern Syria are leaving the country. They will remain in the Middle East, he said, to 'monitor the situation' and to prevent a revival of IS — a goal that even Trump's allies say has become much harder as a result of the pullout.

The Turks began attacks in Syria last week against the Syrian Kurdish fighters, whom Turkey sees as terrorists. On Monday, Syrian government troops moved north toward the border region, setting up a potential clash with Turkish-led forces.

Trump said Turkey's invasion is 'precipitating a humanitarian crisis and setting conditions for possible war crimes,' a reference to reports of Turkish-backed fighters executing Kurdish fighters on the battlefield.

The Kurdish forces previously allied with the US said they had reached a deal with President Bashar al-Assad's government to help them fend off Turkey's invasion, a move that brings Russian forces deeper into the conflict.

In his sanctions announcement, Trump said he was halting negotiations on a $100 billion trade deal with Turkey and raising steel tariffs back up to 50%. Trump also imposed sanctions on three senior Turkish officials and Turkey's defense and energy ministries.

'I am fully prepared to swiftly destroy Turkey's economy if Turkish leaders continue down this dangerous and destructive path,' Trump said.

Treasury secretary Steven Mnuchin said the sanctions will hurt an already weak Turkish economy. Pence said the US will continue to ramp up the sanctions 'unless Turkey is willing to embrace a cease-fire, come to the negotiating table and end the violence.'

American troops consolidated their positions in northern Syria on Monday and prepared to evacuate equipment in advance of a full withdrawal, a US defense official said.

The official, who was not authorized to be quoted by name, said US officials were weighing options for a potential future counter-IS campaign, including the possibility of waging it with a combination of air power and special operations forces based outside Syria, perhaps in Iraq.

The hurried preparations for a US exit were triggered by Trump's decision on Saturday to expand a limited troop pullout into a complete withdrawal.

Defense secretary Mark Esper said on Monday he would travel to Nato headquarters in Brussels next week to urge European allies to impose 'diplomatic and economic measures' against Turkey — a fellow Nato ally — for what Esper called Ankara's 'egregious' actions.

Esper said Turkey's incursion had created unacceptable risk to US forces in northern Syria and 'we also are at risk of being engulfed in a broader conflict.'

The only exception to the US withdrawal from Syria is a group of perhaps 200 troops who will remain at a base called Tanf in southern Syria near the Jordanian border along the strategically important Baghdad-to-Damascus highway. Those troops work with Syrian opposition forces unrelated to the Kurdish-led fighters in northern Syria.

Esper said the US withdrawal would be done carefully to protect the troops and to ensure no US equipment was left behind. He declined to say how long that might take.

In a series of tweets on Monday, Trump defended his gamble that pulling US forces out of Syria would not weaken US' security and credibility. He took sarcastic swipes at critics who say his Syria withdrawal amounts to a betrayal of the Kurds and plays into the hands of Russia.

'Anyone who wants to assist Syria in protecting the Kurds is good with me, whether it is Russia, China, or Napoleon Bonaparte,' he wrote. 'I hope they all do great, we are 7,000 miles away!'

Trump has dug in on his decision to pull out the troops, believing it fulfills a key campaign promise and will be a winning issue in the 2020 election, according to White House officials.

This has effectively ended a five-year effort to partner with Syrian Kurdish and Arab fighters to ensure a lasting defeat of the Islamic State group. Hundreds of IS supporters escaped a holding camp amid clashes between invading Turkish-led forces and Kurdish fighters, and analysts said an IS resurgence seemed more likely, just months after Trump declared the extremists defeated.

Trump spoke about the IS detainees in a phone call on Monday with Kurdish general Mazloum Kobani. Pence said Mazloum assured the president that Kurdish forces would continue to support the prisons holding IS fighters.

Withdrawing US forces from Syria 'would re-create the very conditions that we have worked hard to destroy and invite the resurgence of ISIS,' he said in a statement. 'And such a withdrawal would also create a broader power vacuum in Syria that will be exploited by Iran and Russia, a catastrophic outcome for the United States' strategic interests.'

New Jersey Sen. Bob Menendez, the top Democrat on the Senate Foreign Relations Committee, said Trump is weakening America. 'To be clear, this administration's chaotic and haphazard approach to policy by tweet is endangering the lives of US troops and civilians,' Menendez said in a statement.

However, Trump got quick support from Republican Sen. Lindsey Graham of South Carolina, who earlier had lambasted his withdrawal decision as 'shortsighted,' ''irresponsible' and 'unnerving to its core.' Graham said he was asked to join the president and his team for phone calls with the key leaders in the conflict.

'President Trump made it clear to President Erdogan this incursion is widely unpopular in the United States, greatly destabilizing to the region, is putting in jeopardy our successes against ISIS, and will eventually benefit Iran,' Graham said.

The Kurds have turned to the Syrian government and Russia for military assistance, further complicating the battlefield.

The prospect of enhancing the Syrian government's position on the battlefield and inviting Russia to get more directly involved is seen by Trump's critics as a major mistake. But he tweeted that it shouldn't matter.

'Others may want to come in and fight for one side or the other,' he wrote. 'Let them!'