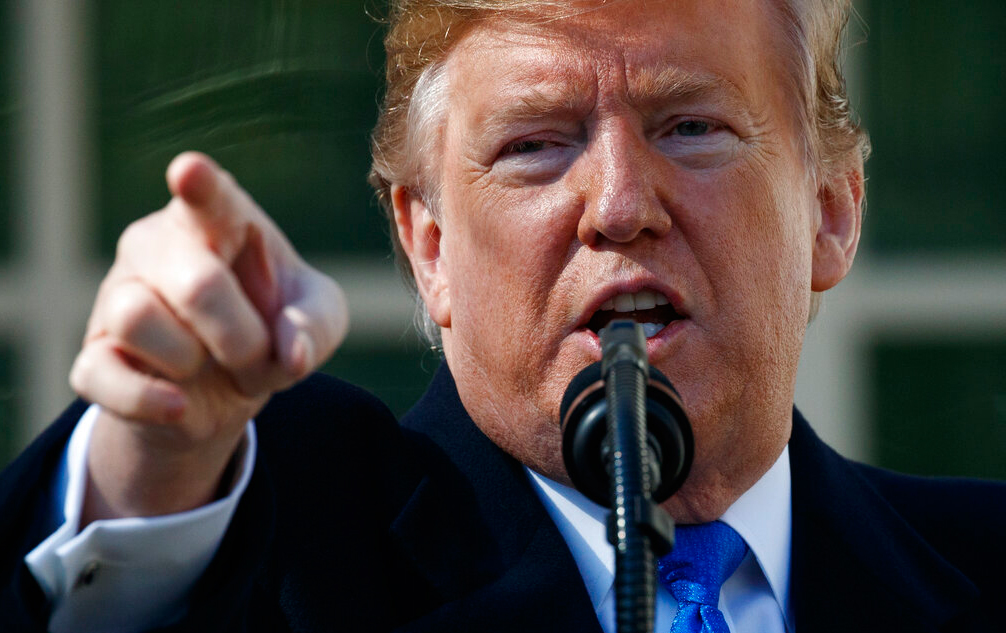 President Donald Trump speaks during an event at the White House to declare a national emergency in order to build a wall along the southern border on Friday, February 15, 2019, in Washington.
AP
Peter Baker   |   Washington   |   Published 15.02.19, 07:57 PM

President Trump formally declared a national emergency at the border on Friday to access billions of dollars to build a border wall that Congress refused to give him, transforming a highly charged policy dispute into a fundamental confrontation over separation of powers.

In a televised announcement in the Rose Garden, Trump said he was signing the declaration to protect the country from the flow of drugs, criminals and illegal immigrants coming across the southwestern border from Mexico, which he characterised as a profound threat to national security.

Combined with the $1.375 billion authorised for fencing in a spending package passed by Congress on Thursday night, Trump would then have about $8 billion in all to advance construction of new barriers and repairs or replacement of existing barriers along the border this year, significantly more than the $5.7 billion that Congress refused to give him.

The President’s decision, previewed on Thursday, triggered instant condemnation from Democrats and some Republicans, who called it an abuse of power. House Democrats plan to introduce legislation to block the president’s move, which could pass both houses if it wins the votes of the half-dozen Republican senators who have criticised the declaration. That would put the President in the position of issuing the first veto of his presidency.

If such a legislative strategy failed to stop Trump, the issue would likely be taken to court, either by congressional Democrats, liberal advocacy groups or both.

Legal experts have said the administration can make serious arguments to justify its move, but added that courts may decide that it is stretching the intent of the law. The Supreme Court is controlled by a five-member conservative bloc but in recent years it has reined in Republican and Democratic Presidents who were judged to be exceeding their authority.

White House officials rejected critics who said Trump was creating a precedent that future Presidents could use to ignore the will of Congress.

Republicans have expressed concern that a Democratic commander in chief could cite Trump’s move to declare a national emergency over gun violence or climate change without legislation from Congress.

“It actually creates zero precedent,” Mick Mulvaney, the acting White House chief of staff, told reporters on Friday morning. “This is authority given to the President in law already. It’s not as if he didn’t get what he wanted and waved a magic wand to get some money.”

Presidents have declared national emergencies under a 1970s-era law 58 times and 31 of those emergencies remain active. But most of them dealt with foreign crises and involved freezing property or taking other actions against national adversaries, not redirecting money without explicit congressional authorisation.

White House officials cited only two times that such emergency declarations were used by presidents to spend money without legislative approval — once by President George Bush in November 1990 during the run-up to the Persian Gulf War and again by his son, President George W. Bush, in 2001 after the terrorist attacks on New York, Washington and Pennsylvania.

In both of those cases, the Presidents were responding to new events — the Iraqi invasion of Kuwait and al Qaida’s assault on America — and were moving military money around to use for military purposes. Neither was taking action specifically rejected by Congress.

In Trump’s case, he is defining a longstanding situation at the border as an emergency even though illegal crossings have actually fallen in recent years. And unlike either of the Bushes, he is taking action after failing to persuade lawmakers to go along through the regular process.

The spending package passed by Congress on Thursday after a two-month showdown with the President included none of the $5.7 billion that Trump demanded for 234 miles of steel wall. Instead, it provided $1.375 billion for about 55 miles of fencing.

Trump agreed to sign the package into law anyway to avoid a second government shutdown after the impasse over border wall funding closed the doors of many federal agencies for 35 days and left 800,000 workers without pay.

White House officials said Trump would sign that spending package later on Friday or perhaps on Saturday, saying that the bill had not yet been formally delivered from Capitol Hill. Trump plans to leave Washington on Friday afternoon for a long holiday weekend at his Mar-a-Lago estate.

For weeks, Republicans led by Senator Mitch McConnell of Kentucky, the majority leader, urged Trump not to declare a national emergency, but the President opted to go ahead anyway to find a way out of the political corner he had put himself in with the failed effort to force Congress to finance the wall.

McConnell privately told the President he would support him despite his own reservations, but warned Trump that he had about two weeks to win over critical Republicans to avoid having Congress pass a resolution rejecting the declaration.