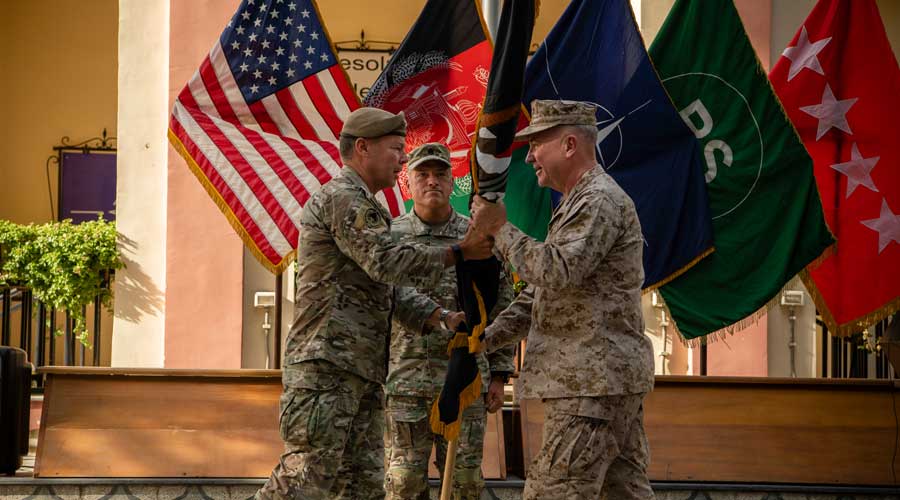 General Austin S. Miller, left, hands over the mission flag to Gen. Kenneth F. McKenzie Jr. during the change of command ceremony in Kabul, Afghanistan on Monday, July 12, 2021. Gen. Miller, the top American general in Afghanistan stepped down on Monday, a symbolic moment as the United States nears the end of its 20-year-old war and Taliban fighters sweep across the country.
(Kiana Hayeri/The New York Times)
Thomas Gibbons-Neff   |   Kabul   |   Published 13.07.21, 12:36 AM

The top American general in Afghanistan stepped down on Monday, a symbolic moment as the US nears the end of its 20-year-old war and Taliban fighters sweep across the country.

At a muted ceremony at US and Nato military headquarters in Kabul, General Austin S. Miller ended his nearly three-year term as commander. His duties will be filled by two officials. Rear Admiral Peter G. Vasely, a former member of Seal Team 6, will take charge of the security mission at the US embassy in Kabul. He will report to General Kenneth F. McKenzie Jr, the head of the military’s Central Command, who will take over the broader military mission in Afghanistan.

General McKenzie, who arrived in Kabul on Monday, spoke afterward, assuring those present that the Americans were not abandoning the Afghan people in such dire times.

“It’s not the end of the story,” General McKenzie said. “It’s the end of a chapter.”

The ceremony came on the heels of a Taliban military offensive that has taken swathes of the country, sometimes without firing a shot. The campaign is a constant indicator of the US-led mission’s inability to groom an effective Afghan military despite spending billions of dollars on the effort since the US invasion in 2001.

General Miller oversaw a military campaign aimed at keeping the Taliban at the negotiating table and the Afghan forces unified in the face of political uncertainty.

Despite thousands of airstrikes, increased civilian casualties and short-term tactical gains, it is unclear how successful the US military effort was: The final agreement between the insurgent group and the US in February 2020 clearly favoured the Taliban, and the Afghan government was completely cut out of the deal.