The protest movement, led mainly by students and young people, aims to remove Prayuth, who took power in a 2014 coup 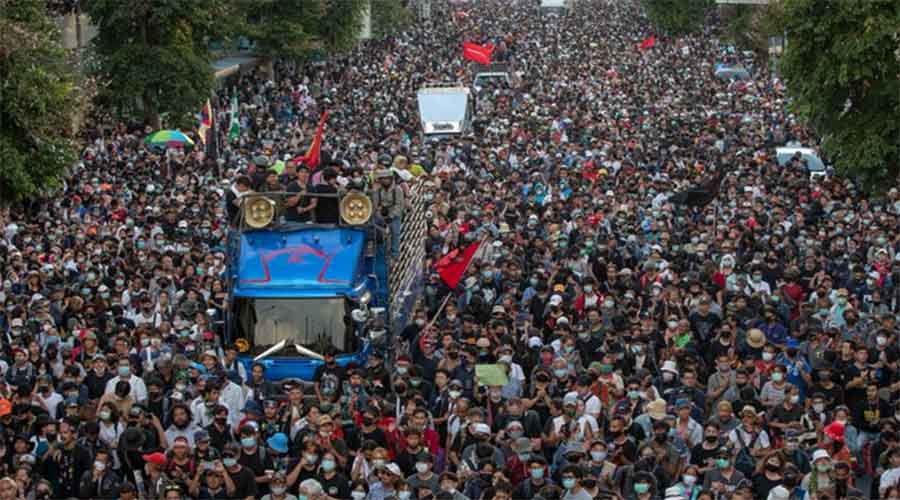 Protesters march towards Government House during an anti-government rally in Bangkok on Wednesday.
Twitter/@TolaSholaTV
Reuters   |   Bangkok   |   Published 15.10.20, 02:56 AM

Thousands of Thai protesters set up camp outside Prime Minister Prayuth Chan-ocha’s office late on Wednesday, in an escalation of three months of demonstrations aimed at forcing the former junta leader to step down.

The protesters had earlier faced off against thousands of royalist supporters, who showed up in their biggest numbers since the start of protests that have also demanded curbs on the monarch’s powers.

“We won’t leave until Prayuth resigns,” protest leader Arnon Nampa told the crowd gathered at the gates of Government House, many sitting on mats on the ground. The protesters said they planned to stay for at least three days.

Police spokesman Kissana Phathanacharoen said the presence of protesters within 50 metres of Government House was illegal.

But government spokesman Anucha Burapachaisri told Reuters police had been told to avoid needless confrontation. Officials at the Premier’s office were told not to come to work on Thursday.

The protest movement, led mainly by students and young people, aims to remove Prayuth, who took power in a 2014 coup.