Most of the casualties were students; Ghani blames Taliban while EU terms it as an attack on future of Afghanistan 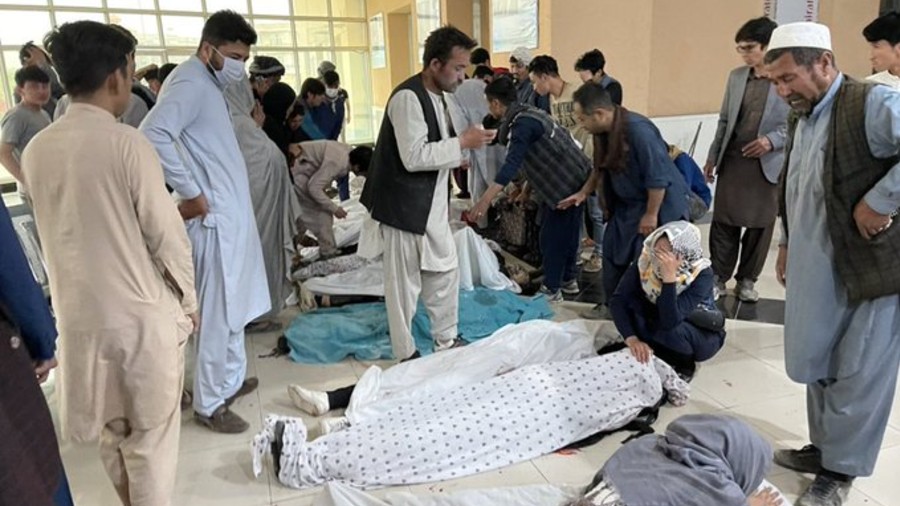 A senior interior ministry official told Reuters on condition of anonymity that most of the casualties were students coming out of the Sayed ul Shuhada school.

Footage on TV channel ToloNews showed chaotic scenes outside the school, with books and school bags strewn across a bloodstained road, and residents rushing to help victims.

At a nearby hospital, staff wheeled in injured students while dozens of distressed relatives searched desperately for their sons and daughters, according to a Reuters witness.

A spokesman for the interior ministry, Tariq Arian, put the death toll at least 30 and injured at 52 but did not specify the cause or the target.

Kabul is on high alert since Washington announced plans last month to pull out all US troops by September 11, with Afghan officials saying the Taliban have stepped up attacks across the country following the announcement.

No group has claimed responsibility for Saturday’s attack. Taliban spokesman Zabihullah Mujahid denied the group was involved and condemned the incident.

Saturday’s explosions took place in western Kabul, a heavily Shia neighbourhood that has frequently been attacked by Islamic State militants over the years.

The school is a joint high school for girls and boys, who study in three shifts, the second of which is for female students, Najiba Arian, spokeswoman for the ministry of education, told Reuters.

The wounded are mostly female students, she said.

“The horrendous attack in Dasht-i Barchi area in Kabul, is a despicable act of terrorism,” the EU’s mission in Afghanistan said on Twitter.

“Targeting primarily students in a girl’ school, makes this an attack on the future of Afghanistan.”

The horrendous attack in Dasht-i Barchi area in Kabul, is an despicable act of terrorism. Targeting primarily students in a girls’ school, makes this an attack on the future of Afghanistan. On young people determined to improve their country. Our thoughts go to all affected.

“The Taliban, by escalating their illegitimate war and violence, have once again shown that they are not only reluctant to resolve the current crisis peacefully and fundamentally, but by complicating the situation,” Ghani said.

The Taliban and US last year signed an agreement to end the 20-year war, which started with US and allied forces invading Afghanistan following the September 11, 2001, attacks in New York by al Qaida, whose leader, Osama bin Laden, was being given shelter by the Taliban government.

Under the agreement, Washington was to pull out troops in exchange for Taliban security guarantees and for the group to start peace talks with the Afghan government. Talks began last year but have since stalled.

Taliban attacks on foreign forces have largely ceased, but they continue to target government forces. A number of journalists, activists and academics have also been killed in attacks blamed on the Taliban, who deny involvement.

Last month, the Washington said it was pushing back the troop pullout deadline from May 1 to September 11, which the Taliban warned could have consequences for the agreement.

The explosion is being investigated, said Arian who added the death toll could rise further.

Residents in the area said the explosion was deafening. One, Naser Rahimi, told The Associated Press he heard three separate explosions, although there was no official confirmation of multiple blasts. Rahimi also said he believed that the sheer power of the explosion meant the death toll would almost certainly climb.

The Islamic State has declared war on Afghanistan’s minority Shias. Washington blamed IS for a vicious attack last year in a maternity hospital in the same area that killed pregnant women and newborn babies.

In Dasht-e-Barchi, angry crowds attacked the ambulances and even beat health workers as they tried to evacuate the wounded, health ministry spokesman Ghulam Dastigar Nazari said. He implored residents to cooperate and allow ambulances free access to the site.

At one nearby hospital, Associated Press journalists saw at least 20 dead bodies lined up in hallways and rooms, with dozens of wounded people and families of victims pressing through the facility.

Outside the Muhammad Ali Jinnah Hospital, dozens of people lined up to donate blood, while family members checked casualty posted lists on the walls.

Mujahid also accused Afghanistan’s intelligence agency of being complicit with IS. The Taliban and the Afghan government have traded accusations over a series of targeted killings of civil society workers, journalists and Afghan professionals.

While IS has taken responsibility for some of those killings, many have gone unclaimed. IS has previously claimed attacks against minority Shias in the same area, last year claiming two brutal attacks on education facilities that killed 50 people, most of them students.