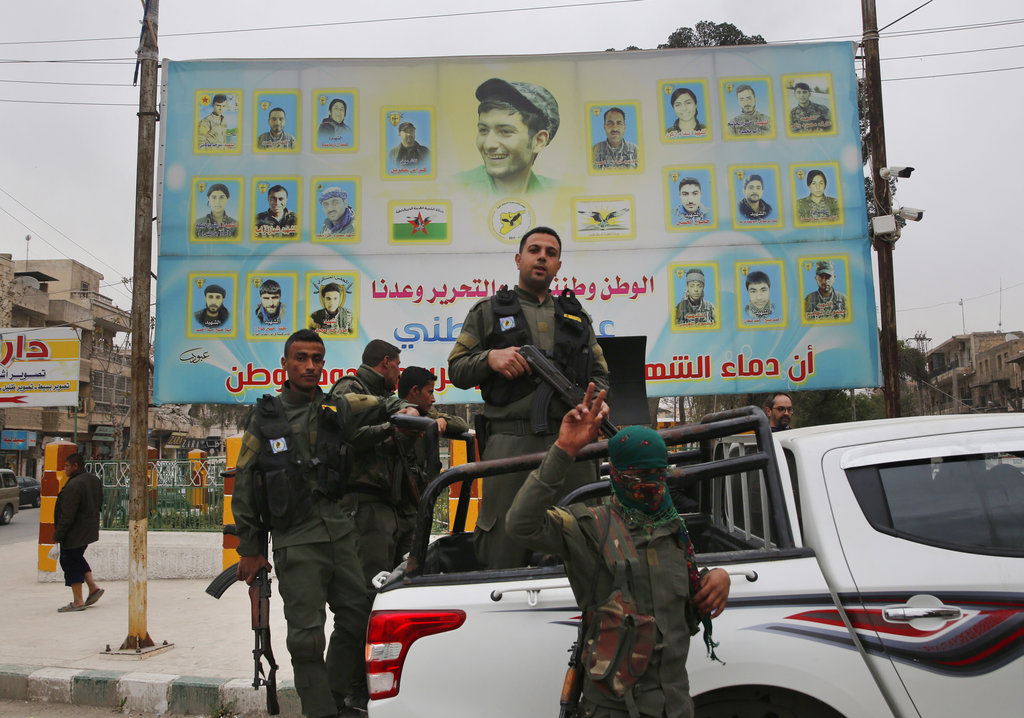 In this March 28, 2018 file photo, members of the Kurdish internal security forces stand on their vehicle in front of a giant poster showing portraits of those killed fighting against the Islamic State group, in Manbij, north Syria.
AP
AP   |   Beirut   |   Published 28.12.18, 11:53 AM

Syria's military announced on Friday that it has taken control of the flash-point Kurdish-held town of Manbij, where Turkey has threatened an offensive.

The announcement was quickly welcomed by the Kremlin, whose spokesperson Dmitry Peskov called it a 'positive step' that could help stabilise the situation.

There was no immediate comment from Turkey or the US, whose troops have been patrolling the town and the tense frontline between Manbij and adjacent towns where Turkey-backed fighters were based.

Turkey, which views the Kurdish militia as a terrorist group, had been threatening a military operation against Manbij. Turkey and its allied fighters have been amassing troops around Manbij in recent days.

The threats triggered the US announcement it would withdraw troops from Syria. A timetable for the withdrawal has not yet been made public.

But the surprise US decision rattled allies and the US Syrian Kurdish partners, who scrambled to find new allies to protect their Kurdish-administered areas in north Syria.

The Syrian government has said it welcomes the Kurdish group returning under its authority. But government officials have stated they will not consider an autonomous area, a main demand for the Kurds.

The Syrian military declaration came shortly after the main Syrian Kurdish militia invited the government to seize control of Manbij to prevent a Turkish attack. The development signals the two sides have agreed to the new arrangement. The Syrian military said it raised the state flag in Manbij.

The Syrian military said it was responding to calls from residents of Manbij and promised safety for all living there.

Syria's entry into Manbij comes a day before Moscow is to host top Turkish officials to discuss the crisis in Syria after the United States announced its withdrawal.