State of Disaster declared in S African province as 40,000 stranded without water or food

Roads and highways have been destroyed, restricting access to those still stuck in many areas 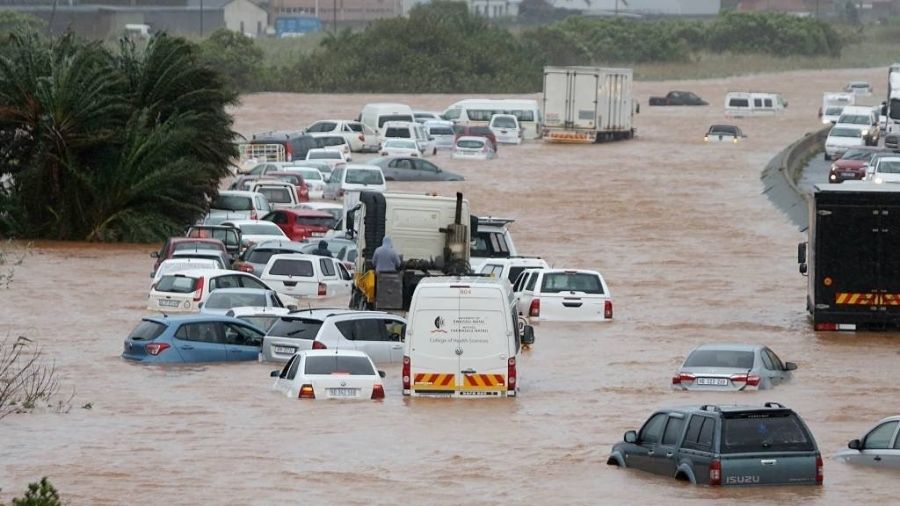 A State of Disaster has been declared in KwaZulu-Natal province of South Africa as thousands of people are still without water, food or access to medical treatment after devastating floods following four days of incessant heavy rain.

Over 300 people have died and scores are still missing after massive floods and landslides left hundreds of homes completely destroyed and entire residential areas cut off from essential services, including water and electricity, with infrastructure that officials said would take weeks to repair.

More than 40,000 people have been affected by the disaster. Mosques, churches and temples across the region have opened their facilities to those left homeless as scores of organisations and individuals in other provinces fight a desperate battle against time to get water and food to the destitute.

Roads and highways have been destroyed, restricting access to those still stranded in many areas. Head of the National Disaster Management Centre Mmaphaka Tau, in an official government gazette, said that after assessing the magnitude and severity of the flooding, all organs of state must strengthen support to implement contingency arrangements.

The state of disaster in KwaZulu-Natal (KZN) was gazetted by the head of the national disaster management centre Dr Mmaphaka Tau on Wednesday following a visit by President Cyril Ramaphosa to some of the destroyed areas.

Ramaphosa spent the entire day in the province and assured victims of the disaster that government would do everything in its power to assist them. While this is a disaster, we must hold hands together as South Africans, as people of KZN, and work together in various structures of government. That is exactly what we are going to do, Ramaphosa said.

The president also commended other communities who have been rallying to send aid to the province.

There were heartfelt scenes at one home when a father related to Ramaphosa said how his four children, aged between 12 and 27, were killed when a wall collapsed on their house while they were sleeping around midnight.

The State of Disaster will enable government to allocate the resources and funds necessary to deal with the impact of the floods and will be effective until further notice.

But government has come under fire from various sources for being ill-prepared to deal with a disaster of this nature.

Government and private hospitals have urged government and the municipalities to prioritise getting access to people who are injured because roads and bridges have been damaged or completely destroyed. All schools have been closed until Tuesday.

The head of the provincial department of education, Nkosinathi Ngcobo, said that 248 schools in the province have been damaged, with some so badly that mobile classrooms will have to be brought in to continue lessons.

At the height of the flooding, huge shipping containers were floating on major highways on Tuesday, with criminal elements looting the contents. Law enforcement officers and rescue organisations, already embattled to reach victims, had to deal with this as well.

In a few areas, there were even threats from crocodiles who had been washed out from overflowing rivers. KZN province is home to about two thirds of South Africa's 1.4 million citizens of Indian-origin, largely descended from the sugar cane farm indentured labourers who arrived in boatloads from 1860 onwards.