SONAR BANGLA@50: Indira as ‘Ma Durga’, but now an undercurrent of scepticism

RECOLLECTING 1971, PART 1: Most of the Mukti Bahini survivors, many of whom were war-wounded, are wrapped in memories of their role as guerillas and of their martyred comrades, not really with their Indian counterparts 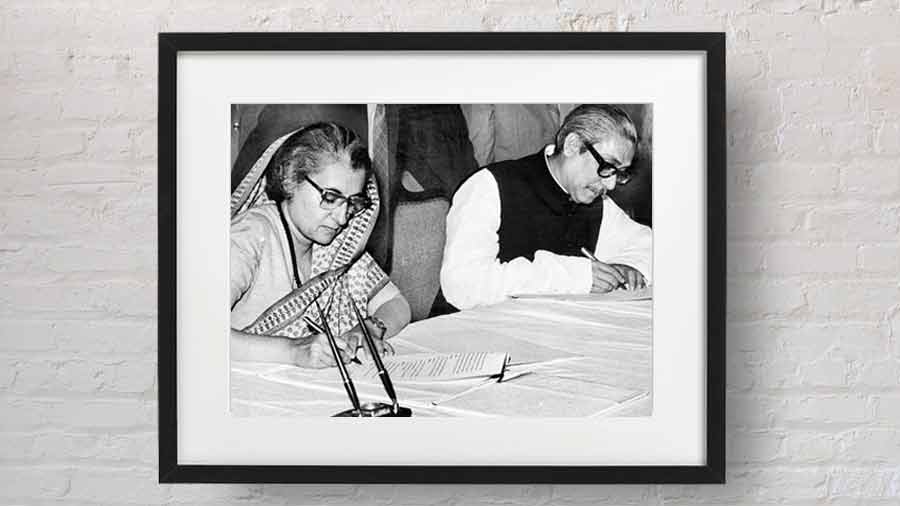 Throughout my seven-day visit to Dhaka in the week of the 50th anniversary of the Liberation of Bangladesh (16-23 December 2021), a chance conversation with Sydney Schanberg of The New York Times fifty years ago kept ringing in my mind. On the very day of Liberation, 16 December 1971, I had been put in charge of coordinating urgent relief supplies to the emerging independent country to enable them to receive back their ten million refugees. This afforded me the opportunity of traveling in and out of Bangladesh, and through many parts of the country, in the first nine months of Liberation.

On the first of these visits, I ran into Sydney Schanberg at the breakfast buffet in the Intercontinental. More than any other correspondent, it was he who had relentlessly brought to the attention of Western readers the horrors being perpetrated by Pakistan against its own citizens in its eastern wing. He shook his head and muttered, “You guys have lost it”. I was stunned. Here I was glorying in our greatest feat of arms and here was Schanberg telling me we’d lost it! Pressed for an explanation, he went on, “Your army jawans are going around claiming that it was the Indian army that won the war. No credit is being given to the sterling role of the Mukti Bahini who paved the way to victory.”

Schanberg’s apprehensions were realized at the moment of surrender. While technically Lieut. Gen. Jagjit Singh Arora took the surrender as the head of the joint command of the Indian army-Mukti Bahini, there was virtually no acknowledgement of the Mukti Bahini (beyond a glimpse of the Bahini air chief in a far corner of the official photograph). General (then, Colonel) MAG Osmany, who headed the Mukti Bahini, had let it be known that he desired to be present at the surrender ceremony, but stiffly formal army protocol insisted that he was far too junior to be granted equal status to the Indian general. Fifty years on that still rankles.

Lt Gen Niazi signing the Instrument of Surrender under the gaze of Lt Gen Aurora.
Wikipedia

Where we are proud of having withdrawn all our forces from sovereign Bangladesh within three months of victory, the question still asked in Bangladesh is: “Why did India take away all the arms and munition surrendered by Pakistan? We needed these more as we were only just building our armed forces. And why did you unilaterally return the 93,000 PoWs to Pakistan, without even hanging on to the 195 Pak army personnel we wanted to try for war crimes? And why take away all the silver in the regimental messes without sharing any of the booty with us?” It is also asked, “Why did you not intervene on 26 March 1971, when the crackdown started, instead of waiting nine months? It would have saved ‘millions’ of Bangla lives.”

I do not seek to rebut them for I am here not to argue but to listen and, if possible, understand.

With the share of under-35s constituting 70% of the population in Bangladesh, one is hard pressed to find those with living memories of the glory days. Those who do remember, tend to be white-haired and leaning on walking sticks. Most of the Mukti Bahini survivors of 1971, many of whom were war-wounded, are wrapped in memories of their role as guerillas and of their comrades who were killed, not really with their Indian counterparts.

However, one articulate voice in favour of the Indian jawan is that of Bangladeshi Col. Sajjad Ali Zahir. He had defected from the Pakistan army at the commencement of hostilities, carrying in his head operational details of Pakistani preparations and dispositions in the western theatre. At great risk to his life, he had slipped through rough countryside into Indian lines and divulged all he knew. It is only in the 50th year of Liberation that India has seen fit to recognize his selfless services with a Padma Shri. His memories are fulsome. “How can we forget the Indian soldiers who gave their lives for our liberation? Their blood is mingled with the Padma, the Teesta, the Jumna and the Meghna.” Other reactions are less generous. “You wanted to split Pakistan. We needed to free ourselves of Pakistani oppression. The two objectives coincided. That is all there was to it.”

A key spokesman of the Hasina establishment insists, on the other hand, that India (and Indira) are etched in the memory of Bangladesh for having stood by the millions of refugees in 1971 till it was safe for them to return to their homes; for the support extended to the provisional government in exile in Mujibnagar; and for doing all they could to ensure the safety of Bangabandhu in his Pakistani jail. Above all, he says, they cherish Atal Behari Vajpayee hailing Indira Gandhi on the morrow of victory as ‘Ma Durga’.

While the official line, as explained to me by authoritative Bangladeshi sources, is to “publicly acknowledge India’s role in Liberation” and “express gratitude”, general and even intellectual public opinion, is more restrained, more skeptical. Indignation clearly has a longer shelf-life than gratitude.

I think there is a bit of truth to both views, the cynical and the adulatory. It seems wisest to celebrate liberty but not dwell on it too long.

The senior political element of the Liberation movement, starting with Sheikh Mujibur Rahman and stretching down the line to provisional President Syed Nurul Islam, provisional PM Tajuddin Ahmed and top-ranking provisional ministers Capt. Mansoor Ali and Qamruzzaman, who manned the Government of Bangladesh in exile at Mujibnagar, are all dead, most assassinated within four years of Liberation by their own army majors (all trained in Pakistan and infected with the Pakistani army’s Bonapartism). The two most important political lieutenants of Bangabandhu still active are Kamal Hossain, Mujib’s closest confidante, who drafted the Bangladesh constitution and served as his Foreign Minister, and Rehman Sobhan, the eminent economist, but both are opposed to or doubtful of the Awami League in its present incarnation to which both belonged in their youth. They, of course, recall with fervour the halcyon days of fifty years ago but realistically recognize that much has happened since then which renders the struggle a distant memory or only a story heard from elders. It is not a living memory that animates or drives the present.

One of them poignantly remarks, “We do not honour the memory of the people who became martyrs.” I am surprised as this is Liberation week, and the streets of Dhaka are festooned with huge blow-ups, posters, photographs, and hoardings of Sheikh Mujibur Rahman. At many street corners are video projections showing clips of Bangabandhu before and after Liberation. There are some too of the other leaders and a few of the guerillas of the Mukti Bahini and of unknown Bangladeshis doing their bit for the cause. This also provokes voices of dissent. “This personality cult is really too much,” says one. “Why is the accent not more on the ordinary people and their travails?” Fortunately, I am not a Bangladeshi and, therefore, not obliged to take sides in the argument.

There appear to be three principal sources of incipient hostility to India; the communal forces; right-wing political parties; and the projection of an “Indian bogey” for partisan domestic reasons. The Hasina government is opposed to all three forces – but while that might give comfort to sections of official India, there is little we can do (or should do) in Bangladesh to curb these hostile forces. However, there is a great deal we can do within India to blunt these forces: above all, rein in communalism in India instead of aggravating it as seems to be our government’s agenda; discreetly entertain relations with the principal opposition parties, acknowledging implicitly that they represent 40% of Bangladesh’s electorate; and solve, rather than argue about, petty problems of implementation that lend credibility to the anti-India bogey.