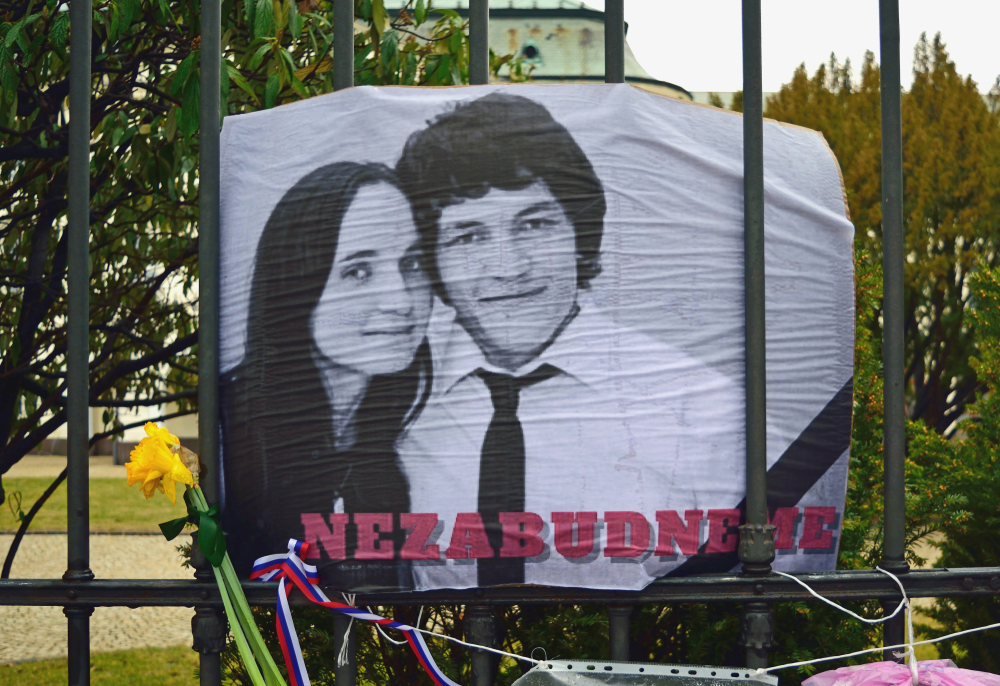 A photograph of murdered journalist Jan Kuciak and Martina Kusnirova with the inscription "we will not forget". Governing populists risked being punished amid popular outrage over the 2018 gangland-style murder of the journalist, whose stories exposed high-level corruption in the country.
Shutterstock
PTI, AFP   |   Bratislava   |   Published 29.02.20, 12:25 PM

Slovaks voted Saturday in a general election where the governing populists risked being punished amid popular outrage over the 2018 gangland-style murder of a journalist whose stories exposed high-level corruption in the eurozone country.

Allegedly a hit ordered by a businessman with connections to politicians, the killing of Jan Kuciak, which also took the life of his fiancee Martina Kusnirova, has become a lightning rod for public outrage at graft in public life.

Reeling from the fallout of the murder, surveys suggest that Robert Fico's governing populist-left Smer-Social Democracy (Smer-SD) party is waning and threatened most by OLaNO, a surging centre-right opposition party focused on rooting out corruption.

”Change is much needed here,” said Daniela Jonasova, a 35-year-old office clerk, who told AFP she voted for OLaNO at a Bratislava polling station.

”I like the way (OLaNO leader Igor) Matovic points out what is wrong in Slovakia -- I believe he'll bring a real change,” she added, referring to OLaNO's anti-graft focus.

According to Bratislava-based political analyst Radoslav Stefancik, “the election is primarily about the desire for decency in politics.

”Instead of protesting against the ruling Smer-SD party on the streets, people will do so in polling stations,” Stefancik told AFP.

The double murder triggered the largest anti-government protests since communist times and toppled Fico as prime minister, with his party colleague Peter Pellegrini taking over the reins.

It also propelled Zuzana Caputova, a liberal lawyer and anti-graft activist, out of nowhere to win last year's presidential race in this country of 5.4 million people.

”There's a strong desire for change in society,” Branislav Kovacik, the dean of the faculty of political science at the University of Matej Bel in Banska Bystrica, northern Slovakia, told AFP on Saturday.

”The parties of the democratic opposition are anticipating a good result that would allow them to take power,” he added.

Having vowed to immediately push through anti-corruption measures should he win office, OLaNO leader Matovic, a 46-year-old MP, appears to have galvanised voter outrage over the murders and the high-level corruption they exposed.

An eccentric self-made millionaire and former media boss, Matovic set up “Ordinary People and Independent Personalities -- OLaNO” a decade ago.

Analysts suggest the media savvy but unpredictable politician could become premier if he manages to unify the splintered opposition.

Although Fico has ruled out a post-election coalition deal with the far-right Our Slovakia LSNS, the two parties joined forces this week in parliament to pass a Smer-SD bill giving pensioners extra benefits, a move the opposition condemned as pork-barrel electioneering.

”Fico has character. He's a real politician. Everyone else lacks the experience and knowledge as how to run a country,” Iveta, a pensioner and Smer-SD voter, who declined to provide her surname, told AFP at a polling station in Bratislava.

She said benefits the Smer-SD introduced for pensioners and students, like free trains, were a factor in her decision.

Capitalising on its anti-establishment posture and a backlash against Slovakia's impoverished Roma minority, surveys show the LSNS could double its current 10 seats in the 150-member unicameral parliament.

Kotleba, 42, a former regional governor, is notorious for having previously led street marches with party members dressed in neo-Nazi uniforms. He faces fresh hate-speech charges after having already been acquitted of similar allegations.

Surveys suggest the LSNS is the number one choice of first-time voters, many drawn by its nationalist economic agenda.

”I like the LSNS idea to create state-owned enterprises and to nationalise strategic companies,” Dominik Kmet, a 19-year-old first-time voter told AFP, adding that for him, the LSNS is “not fascist nor racist”.

Friendly with Russia, Kotleba wants Slovakia to exit the US-led NATO defence alliance and is hostile towards the European Union.

Heavily dependent on car-making, growth in the Slovak economy is projected to slow to 2.2 percent this year, narrowly down from 2.3 percent in 2019, before hitting 2.6 percent in 2021, according to the European Commission's latest forecast.

Unemployment is relatively low at around 5.6 percent in late 2019. An exit poll is expected shortly after polling stations close at 2100 GMT.