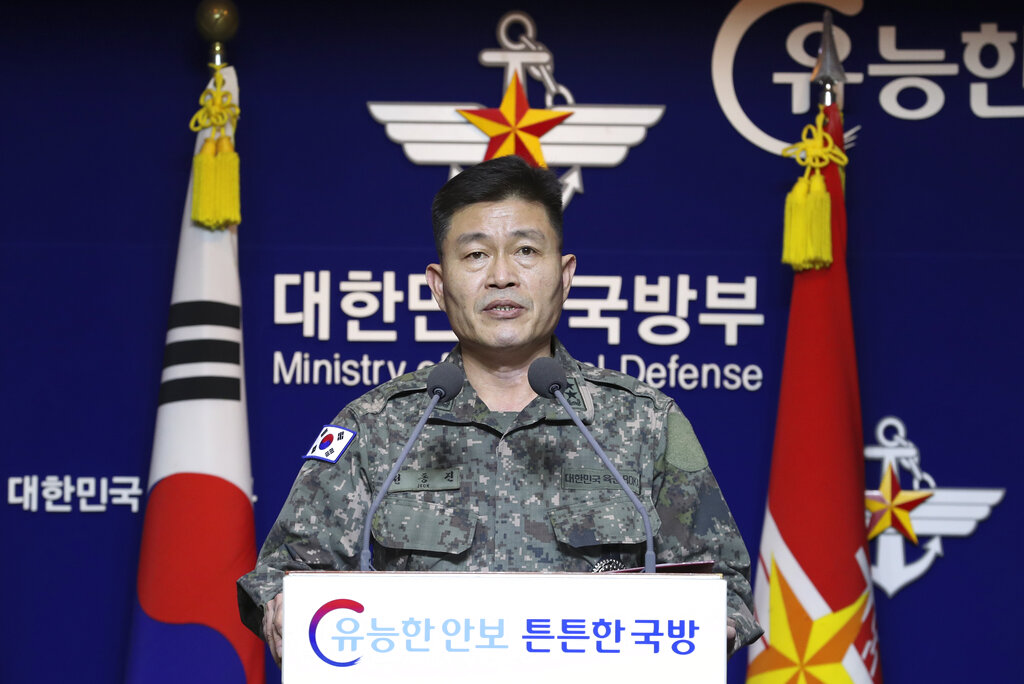 The recent North Korea activities could indicate that it wants to show what would happen if Washington fails to meet a year-end deadline set by its leader, Kim Jong Un, for the US to offer a new proposal in their stalemated nuclear talks.

Seoul's Joint Chiefs of Staff said in a statement that the projectiles were launched towards North Korea's eastern waters from northeastern South Hamgyong province.

Maj. Gen. Jeon Dong Jin, a senior operations officer at the JCS, said the projectiles flew about 380 kilometers at a maximum altitude of 97 kilometers. He said South Korean and US intelligence authorities were continuing to analyse the details.

'Our military expresses its strong regret over (the launches) and urges (North Korea) to immediately stop acts that escalate military tensions,' Jeon said in a televised briefing. He said the military is monitoring possible additional launches by North Korea.

Japanese Prime Minister Shinzo Abe condemned the launches as a 'serious challenge' to both Japan and the international community, even though the projectiles did not land inside Japanese territorial waters.

He said his government will 'do its utmost' to protect the lives and assets of Japanese people.

The reported launches were the 13th major public weapons test by North Korea this year and the first since it conducted what it called a test-firing of a new 'super-large' multiple rocket launcher late last month. That launcher is apparently the same system that South Korea's military said was likely used in Thursday's launches.

Abe called the projectiles 'ballistic missiles.' Some experts have said that projectiles fired from the 'super-large' multiple rocket launcher are virtually missiles or missile-class weapons.

On Monday, North Korea said leader Kim visited a front-line islet and ordered artillery troops there to practice firing near the sea boundary, the scene of several bloody naval clashes between the two Koreas in past years. South Korea protested the drills, saying they violated an agreement last year aimed at lowering military animosity.

Seoul's defense ministry said the artillery firing occurred on November 23, the ninth anniversary of the North Korean shelling of a South Korean border island that killed four South Koreans in 2010.

With nuclear diplomacy with the United States largely deadlocked, North Korea has test-fired a series of newly-developed weapons to pressure the US while using the standstill in negotiations to upgrade its military capabilities. In early October, it conducted its first underwater launch of a ballistic missile in three years.

Attention is now focused on whether North Korea will resume long-range missile and nuclear tests, which have been suspended since it conducted the third of three intercontinental ballistic missile tests in November 2017. President Donald Trump has called the suspension of those tests a major achievement of his North Korea policy.

In recent weeks, high-level North Korean officials have issued statements via state media saying their country is not interested in diplomacy with the US unless Washington abandons hostile policies toward the North.

North Korea says it wants the US to lift international sanctions imposed on it and provide security guarantees before abandoning its advancing nuclear arsenal. But US officials have said the sanctions on the North Korea will remain in place until takes substantial steps toward denuclearisation.

The nuclear negotiations broke down in February when Trump rejected Kim's demands for major sanctions relief in return for partial disarmament steps during their second summit in Vietnam. They held a third, impromptu meeting in late June at the Korean border village of Panmunjom.